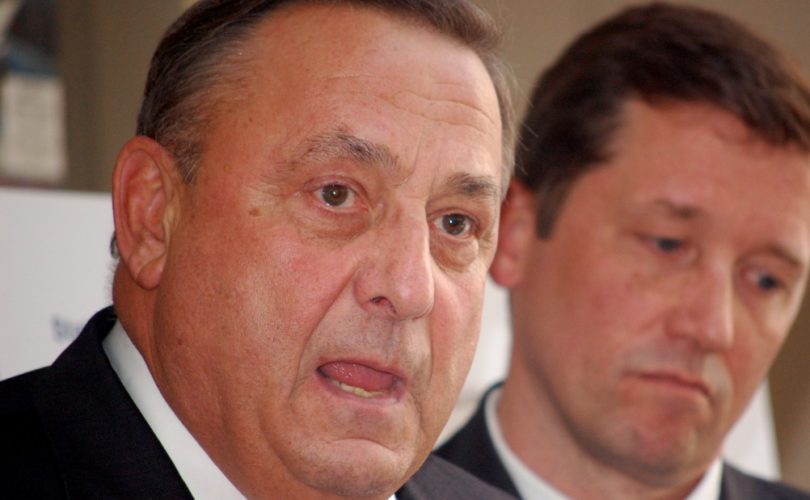 Maine Gov. Paul LePage, a Republican, is fighting state officials in an effort to save the life of a one-year old baby, reports Fox News.

Last December, Aleah Peaslee was left in a coma after her father allegedly shook her, leaving her family signing a Do Not Resuscitate (DNR) order. However, Peaslee regained consciousness shortly thereafter, and the family tried to rescind the order.

However, state child welfare officials — who have temporary custody of Peaslee because of the alleged abuse — told a District Court judge that neither parent is able to make the decisions necessary for the child's welfare.

Peaslee's mother, Virginia Trask, is suing to the state Supreme Court. LePage, who is pro-life, has said that he will stand with Trask to get her daughter back.

“This case is disturbing and is not reflective of my administration’s position that a parent who is the legal guardian of their child should have final say in medical decisions about life-sustaining treatment,” said LePage. “The existing law violates the sanctity of parental rights, and I cannot support it. Unless a parent is deemed unfit and parental rights are severed, the state should not override a parent’s right to make medical decisions for their own child.”

The Alliance Defending Freedom, the Catholic Diocese of Portland, and other advocacy groups have stood with Trask.

Department of Health and Human Services Commissioner Mary Mayhew told Fox, “If the higher court upholds the previous decision that a parent’s rights can be overridden by the Department, this administration will not exercise that misplaced authority.”

“The Department of Health and Human Service remains firmly committed to due process in any case where the rights of a parent are in question.”

LePage, who is one of the nation's most outspoken governors, is in a tough re-election race. Huffington Post's poll-tracking model has him losing to his Democratic opponent by eight points.

1
WATCH LIVE: LifeSite’s 25th Anniversary Gala – streaming now
2
Prestigious Tennessee girls school now accepts any student who ‘identifies’ as female
3
Open letter to Elizabeth Warren: Why do you campaign so strongly for the murder of the unborn?
4
Dr. Robert Malone: Endless mRNA jabs are in the works as the CDC and FDA play ‘hide the data’
5
New video highlights Canadian cricket farm amid ongoing push to switch out beef for bugs
Subscribe to Daily Headlines »