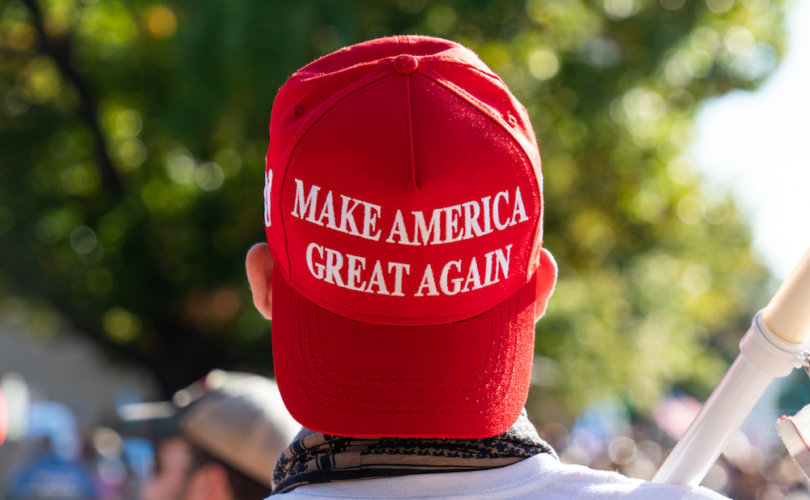 AUGUSTA, Maine (LifeSiteNews) – A remote learning program for the state of Maine features a video which says that terms such as “MAGA” and phrases such as “Speak more English” constitute “covert racism.”

The video, called “Racism is a Virus,” has since been removed from a module called “To What Extent Is My Community Inclusive and Welcoming?” run by the Maine Online Opportunities for Sustained Education (MOOSE) Program and featured a slide that showed a list of terms and phrases that presenters in the video considered to express “covert racism.” The video was created by the Holocaust and Human Rights Center of Maine, the Bangor Daily News reported.

The term “MAGA,” popularized by former President Donald Trump during his 2016 presidential campaign, was featured on the list, along with the terms such as “paternalism” and “Columbus Day,” as well as phrases such as “white privilege denial” and “All Lives Matter,” as examples of “covert racism.”

The list of terms and phrases considered to show “covert racism” is contrasted with examples of “overt racism,” such as lynching, wearing blackface, and using racial slurs.

Marcus Mrowka, a spokesman for the Maine Department of Education, responded to criticism of the slide, stating that neither the Department of Education nor the educator that made the module made the video. When asked if state officials agreed with the video’s content, Mworka stated that the department does not make lesson plans, but rather school boards, community members, teachers, and parents. He further noted that students were not required to watch the video in classrooms.

Mrowka also described the criticism to the module as an “attack,” stating “The Department of Education will continue to empower teachers, parents and elected school boards to make their own decision about public education in Maine, despite attacks like these.”

In addition to having featured the video, the module links to the websites of leftist, pro-LGBT organizations Black Lives Matter and the Gay and Lesbian Alliance Against Defamation (GLAAD).

The MOOSE program was approved by Maine Democrat Governor Janet Mills in September last year and received funding from Joe Biden’s “American Rescue Plan,” Breitbart reported. The program was designed to help mitigate the effects of school closures during the COVID lockdowns. The program has a history of featuring lessons and modules that discuss gender theory and Critical Race Theory (CRT).

Another MOOSE module for high schoolers features a video called “Root Cause,” in which the presenter discusses the concepts of “power, privilege, and oppression,” while also stating that “privileged” identities include white people, “cisgenders,” heterosexuals, and the wealthy.

In May, MOOSE got caught featuring a video for kindergartners that discussed gender theory and homosexual relationships. The Maine Department of Education promptly removed the video, and Mills issued a public apology for its inclusion in the MOOSE program.

Republican-led states have enacted laws designed to curtail the influence of CRT and gender theory in the classroom.

In July, Republican Oklahoma Governor Kevin Stitt launched an investigation into Tulsa Public Schools for allegedly teaching CRT in violation of state law. The district’s accreditation was demoted to the position of “educator” as a result of the investigation for violations of the law.

LifeSiteNews reached out to Mills’ office for comment but has yet to receive a response.