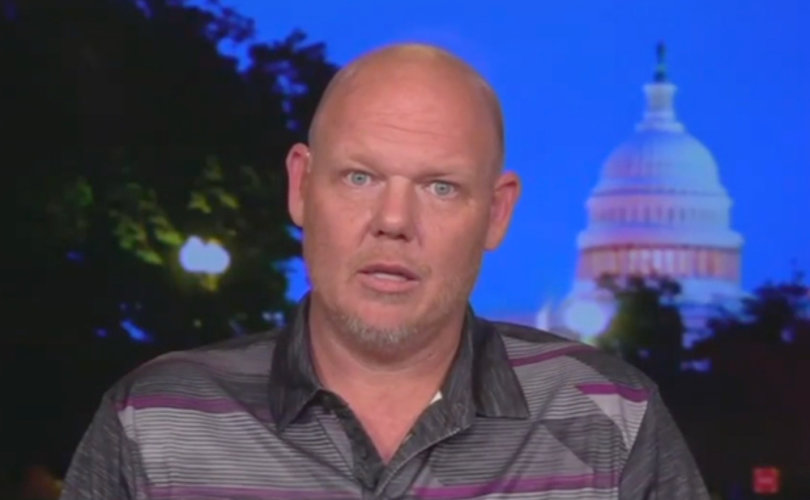 (NewsBusters) – In a bombshell report from The Daily Wire on Tuesday, reporter Luke Rosiak exposed how the controversial Loudoun County School Board (located in the Virginia suburbs of Washington) allegedly covered up the rape of a 14-year-old girl in the girls’ bathroom at the hands of a boy in a skirt just so they could pass a transgender bathroom policy. It was a truly disturbing story that quickly rose to national attention, yet none of the broadcast networks or the liberal cable outlets gave in any airtime.

Fortunately, the Fox News Channel’s Tucker Carlson gave the story the airtime it deserved and interviewed Rosiak to get more details. And a few hours later, FNC host Laura Ingraham spoke with Scott Smith, the father of the victim. He was beaten and arrested at a school board meeting for trying to bring up what happened to his daughter.

Carlson also wanted to bring viewers’ attention to the fact the school board did this to pass a transgender bathroom policy:

You should know that at the same moment all of this was happening, the men who wanted to report the sexual assault of his daughter in a bathroom by a boy wearing a skirt, at that same moment, the same school district was pushing a policy for students identifying as, quote, ‘transgender’ and would allow students to use any bathroom they want.

“Yes, this story is one of the most disturbing I’ve ever worked on. It raises the possibility that the Loudoun County Public Schools covered up the rape of a 14-year-old girl at the hands of a boy wearing a skirt, in order to pass a school policy that Democrats were adamant about passing,” Rosiak told him. “And as a result of concealing that, a second girl was raped last week.”

Adding: “And to prevent all of this from coming out, potentially, they arrest of the father of the victim, tried to put him in jail, and he’s now the face of domestic terrorism, listed individually by the National School Boards Association. All for coming to that meeting.”

In his interview on The Ingraham Angle, Smith explained that he wasn’t a political person and he had gone to the school board meeting “to find out why our children weren’t safe.” And in recounting his experience, he recalled how a radical liberal activist claimed what happened to his daughter didn’t really happen. Even the school board tried to discredit his story by citing no evidence and calling it a “red herring.”

“No, they were tuning us all out. They were looking away. They were reading magazines,” he said of the school board’s lack of interest in the outrage from the parents, even scolding them when they clapped or booed.

And to add even more disturbing details to the story, Smith explained how he was misled about how the boy who assaulted his daughter was being monitored and was told to “stay quiet” about the case. Meanwhile, the attacker was allowed to rape again:

This is, in fact, the sexual predator that assaulted my daughter. We were under the impression from the prosecutor that it sexual predator was being held on in-house arrest with an ankle monitor, and would not return to school until these court sessions were done.

You are innocent until you are proven guilty. I understand that. But we have to protect everyone at the same time.

I was told by everyone, my attorneys, the prosecuting attorney, friends of the family, people I don’t even know, that if I wanted justice for my daughter, that I needed to keep my mouth quiet and not speak out because in order to get justice for my daughter – which is the most important thing to me, of course – was to not come out and let justice prevail.

Smith concluded with his thoughts on the Department of Justice and the National School Boards Association labeling him a “domestic terrorist”:

“That’s really scary that our government is going to weaponize theirself [sic] against parents, and they’re using my video across the nation to spread fear. That’s wrong. I am not a bully. I am not a racist. I love everyone. I love this country. And I want better stuff for it.”

The omission of this heinous story was made possible because of lucrative sponsorships from Hulu on ABC, Vicks on CBS, and Consumer Cellular on NBC. Their contact information is linked so you can tell them about the biased news they fund.