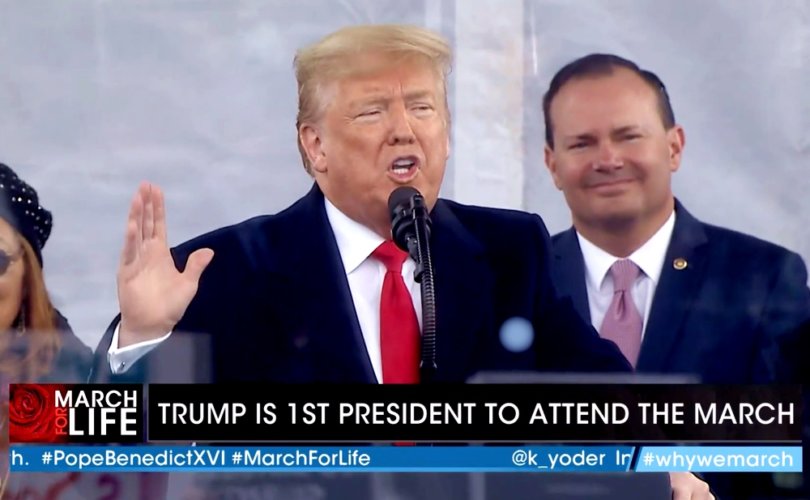 January 28, 2020 (LifeSiteNews) – Not even Donald Trump becoming the first president to address it in person was enough to get the mainstream television media to cover the 47th annual March for Life, according to the analysis of a prominent conservative media watchdog.

Tens of thousands of pro-lifers came to Washington, D.C., for the March for Life last week to recognize the anniversary of Roe v. Wade and call for an end to legalized abortion. Though final estimates have yet to be released, a 58-second time-lapse video released by Students for Life gives a sense of the enormous crowds pouring into the nation’s capital.

The March sees a strong turnout every year, but this year’s was energized with the announcement that President Trump would be there in person, rather than addressing the crowd via live-streaming or prerecorded message.

Trump thanked pro-life activists for providing a “voice for the voiceless,” assuring them “unborn children have never had a stronger defender” in the White House.

“All of us here today understand an eternal truth: every child is a precious and sacred gift from God,” he declared. “Together we must cherish and defend the sanctity and dignity of human life. When we hold a newborn in our arms, we know the boundless love a child brings to a family.”

Yet America’s top three broadcast networks only gave the March for Life a combined 28 seconds of coverage, according to the Media Research Center’s NewsBusters. ABC gave the March 15 seconds during its Friday newscast and CBS gave it 13 seconds on Saturday; NBC ignored it entirely.

CBS and NBC did, however, devote airtime to pro-abortion segments, including an interview with Saturday Night Live star Aidy Bryant about her pro-abortion Hulu show Shrill.

“Instead of reporting from the march, CBS News online channel CBSN hosted a softball interview from Davos, with Planned Parenthood acting CEO Alexis McGill Johnson,” NewsBusters’ Kristine Marsh reported. “It’s hard to think of a more deliberate snub than touting the largest abortion mill in the country on a day when tens of thousands of people around the country are protesting the practice.”