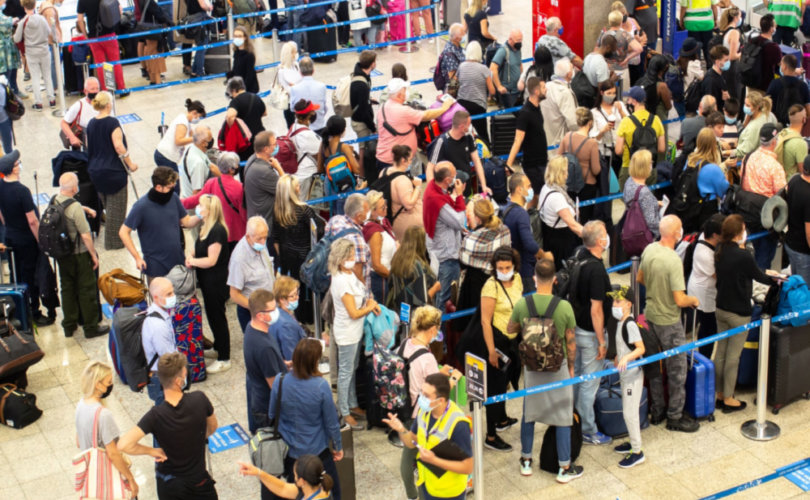 (LifeSiteNews) — A recent spike in flight cancellations and delays has prompted a slew of media reports on the problem, but they are mostly quiet on the real reason for the disruptions: the Biden administration’s COVID shot mandates.

In the U.S. over the Juneteenth and Father’s Day holiday weekend starting last Thursday, at least 32,000 flights were delayed and more than 5,000 flights were canceled, according to the flight-tracker site FlightAware,  reported Business Insider.

The flight disruptions have been of such magnitude that U.S. Secretary of Transportation Pete Buttigieg was forced to drive from Washington, D.C. to New York after his own flight was canceled Saturday.

The airlines themselves are carefully sidestepping the reason behind the delays and cancellations. Delta, the airline that reportedly canceled the most flights this past weekend, announced, “A variety of factors continue to impact our operations, including challenges with air traffic control, weather, and unscheduled absences in some work groups.”

“’Unscheduled absences in some work groups’ is a euphemism for disruptions caused by vaccine mandates,” remarked attorney and conservative activist Andy Schlafly in commentary published by WND.

While Curtis Blessing, a spokesman for American Airlines, said the “vast majority” of these flight issues are “weather-related,” some commentators, such as James Ferrara, co-founder and president of global host travel agency InteleTravel, are admitting that the loss of airline staff is “really what’s driving” the airline problems. Media outlets like Fox News have also noted that a shortage of 12,000 pilots, in addition to other staff shortages, are contributing to the flight chaos.

The pilot shortage is so severe that American Airlines will be cutting its operations in three cities this coming fall, as Breitbart News reported Tuesday: Islip and Ithaca, New York, and Toledo, Ohio. In addition, as many as 303 airports are reducing their service, Fox Business reported.

Conspicuously absent from most mainstream media reports is any mention of the cause of these staff shortages.

When pilots began to call in sick last year to protest their airlines’ COVID jab mandates, and Southwest pilots even filed a lawsuit seeking an injunction against the mandate, both the airlines and the pilots’ unions were tight-lipped about the protests. At the time, airlines were widely blaming flight cancellations on “bad weather.”

A Southwest pilot wrote to author and former New York Times reporter Alex Berenson amid the protests, explaining, “[T]he union cannot organize or even acknowledge the sickout, because doing so would make it an illegal job action.”

Following the deadline for “vaccination,” some airlines took a hit in staffing due to their strict mandates. In a December Senate Commerce Committee hearing, United Airlines CEO Scott Kirby said about 200 employees were terminated because they refused to get the COVID-19 jab, six of which were pilots, according to Reuters.

In addition, United Airlines put 80 pilots who received a medical or religious exemption on unpaid leave. This is just a small fraction of the 22,000 total pilots, and uncounted other airline staff including air traffic control, airport security, baggage handling, catering, and check-in personnel who are out of work.

While failing to address the root cause of the airline staff shortages, Buttigieg proposed as a potential solution that the federal government force airlines to hire more workers.

Because of strict security screening processes that often take up to four months, airports are predicting the staff shortages will continue well into the fall, Breitbart reported.