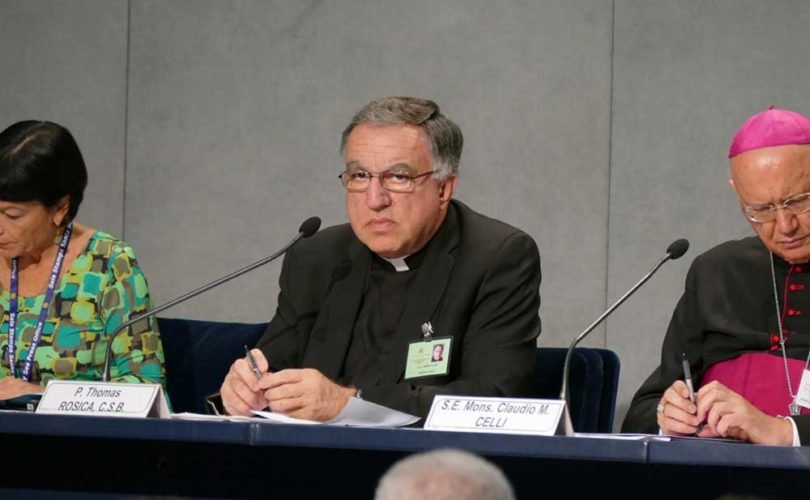 TORONTO, February 28, 2019 (LifeSiteNews) – A Canadian national newspaper that published nine opinion pieces by Vatican spokesman Father Thomas Rosica has stated that it will no longer publish his writing following revelations that he plagiarized.

Sylvia Stead, the Public Editor of Canada’s Globe and Mail, wrote yesterday that she had reviewed the articles that Fr. Rosica, CEO of Salt + Light Catholic Media Foundation, had submitted to the newspaper. Her findings tallied with those of Canadian Lutheran editor Mathew Block, who reported in the National Post that there were problems with three of Rosica’s articles published in the Globe and Mail.

Stead noted that there were unattributed quotes in those articles but indicated that controversial sentences in two of the articles were taken from the Catholic News Service, for which Father Rosica works as “an official spokesman.”

“A representative of the CNS said their service is for priests and other clients who are free to use the material as provided,” the Public Editor stated.

However, Stead concluded that the media priest’s lack of attribution violated the Globe and Mail’s standards, which rule that proper attribution must be given to “material provided by news services.”

She was much more concerned about the third column, an article in which Rosica had plagiarized a sentence from a New York Times book review by Michiko Kakutani and part of a sentence by E.J. Dionne in an article about Pope Francis in the Washington Post.

Rosica has apologized for plagiarism while simultaneously explaining to the National Post that his misappropriation of others’ work could be attributed to his reliance on his Salt + Light interns and on poor note-taking. He told Stead that he was “unsure” as to how he came across Kakutani’s words, saying that they were “perhaps sent by others who know that I was writing frequently on Pope Francis.”

Stead informed readers that proper attributions had been added to all three of Rosica’s columns.

“Globe and Mail editors say they will not use his writings in the future,” she added.

Another newspaper, a magazine and a peer-reviewed academic journal have taken steps to remove Rosica’s work or to disavow it.

On February 23, an editor for the UK’s Catholic Herald noted at the bottom of an article about Rosica’s apology to the National Post that it had removed an article he had submitted from its website.

“The Catholic Herald has published one article by Fr Rosica, a 2015 piece about the family synod,” an editor stated.

“We have discovered that it includes unattributed material from a speech given the previous year by Cardinal Lorenzo Baldisseri. We have therefore removed the text of the article.”

On February 25, America magazine stated that it had removed an article by Rosica it had  published September 1, 2015.  Regarding “Did Pope Francis Say Anything New About Abortion?”, the magazine’s editors stated: “America has become aware that this article included extensive unattributed material from other sources. Accordingly, we have removed the text.”

In that article, Rosica took writing by James T. Bretzke, S.J. in the latter’s  “Treatment of Canonical Penalties”, (orig 2004) and by Cardinal (then Bishop of Pittsburgh) Donald Wuerl in his April 23, 2000 pastoral  letter, “Post-abortion reconciliation and healing”.

America also removed Rosica’s November 16, 2015 article entitled “‘Allahu akbar’ was never a call to violence and destruction”, indicating that it too had “extensive unattributed material from other sources.”

On February 26, Liturgical Press, the publisher of Worship, announced over Twitter that the editors of the peer-reviewed academic journal were “retracting” the article they had published by Rosica.

We have recently learned that large portions of the article, 'The Road to Emmaus and the Road to Gaza: Luke 24:13-35 and Acts 8:26-40' (Worship, 68.2, March 1994, 117-131) by Basilian Father Thomas M. Rosica were plagiarized from a variety of sources. We are in the process of retracting the article and notifying the various publications and/or authors from whose work elements were used without appropriate documentation.

The main victim of plagiarism

A Professor of Philosophy, Hochschild yesterday published a full-length article in First Things arguing that Rosica’s plagiarism should be considered a form of fraud.

“The main victim of plagiarism isn’t the source’s original author, but the plagiarizing author’s audience,” he wrote. “Plagiarism isn’t a violated property claim, but false representation: It is fraud. And like other forms of fraud, its gravity is both internal and external. It perverts the rational soul and damages the wider community.”

At least one of Rosica’s sources, however, is willing to allow sentiment to overcome principle when it comes to plagiarism. Boston College professor Richard Gaillardetz, whose words Rosica misappropriated in a speech in 2014, signaled on Facebook that he didn’t think the priest meant to be “deliberately deceitful.”

“As someone whose writing Father Rosica apparently plagiarized,” he wrote “I can say that while I would never condone plagiarism, I can understand how the pressure to produce a wide range of church commentary on little notice may have led him to sloppy documentation.”

“From what I know about him, it is hard to imagine that there was anything deliberately deceitful in his actions.”

In response, Rosica praised Gaillardetz’s work and asked his forgiveness.

“Thanks, Richard,” he wrote. “I have great admiration and respect for your work. I need to be more prudent and wise in giving credit w[h]ere credit is due. Forgive me for what I caused and continue [y]our outstanding reflections and theological investigations. They are much appreciated by many.”

Rosica gave a partly-plagiarized speech at the Von Hügel Institute at St. Edmund’s College at Cambridge University on February 8. The matter came to light after Professor John Rist objected to Rosica’s slander of Vatican whistleblower Archbishop Carlo Maria Viganó. Rist told LifeSiteNews that Rosica had called Viganó a liar and his testimony against Theodore McCarrick a “diabolical masterpiece.”

An investigation by LifeSiteNews revealed that Rosica had copied a passage from a letter by Cardinal Edwin O’Brien employing this term and slightly changed the emphasis to facilitate his attack on Viganó. Further research revealed that Rosica had also used, without acknowledging his sources, the words of Gregory K. Hillis, Fr. Thomas Reese, Cardinal Walter Kasper, and Fr. James Martin.

Instances of plagiarism by Rosica have now been traced back as far as 1991.