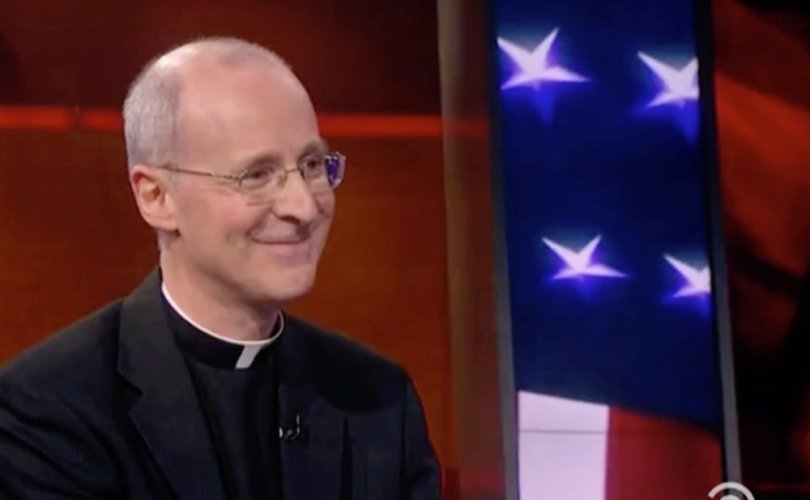 The interview, conducted by editor-in-chief John Feister, focused on Jesuit priest and Vatican advisor Fr. James Martin and his LGBT activism within the Catholic Church. The interview specifically highlights Fr. Martin’s pro-LGBT book Building a Bridge, a book that has been strongly criticized by Church leaders, including Cardinal Robert Sarah, for refusing to call homosexual actions sinful.

St. Anthony Messenger is published by the Franciscan Friars of the Saint John the Baptist Province in the order of the Franciscans Minor.  It advertises itself as the “number-one national Catholic family magazine.” The interview appeared online last week and is set to appear in the December issue of the monthly magazine.

Feister’s rosy interview with Martin in a publication trusted by many Catholic families gives legitimacy to the priest’s pro-homosexualist agenda. When Feister asks Martin why Catholics are “conflicted about the whole LGBT issue,” Martin ignores Catholic teaching on homosexuality to talk about welcoming LGBT Catholics.

In the interview, there is no serious discussion of Sacred Scripture which, to quote the Catechism, “presents homosexual acts as acts of grave depravity.” There is no reference to Catholic doctrine that “the sin of Sodom”, like murder, oppressing the poor and defrauding workers of their wages, is a sin crying out to the heavens for justice.

There is not a whisper about the pioneering work of Father John Harvey and his “Courage” movement in the field of pastoral care for people who experience same-sex desire.

There are no references to the legal attacks on Christians who follow God’s teaching on marriage and sexuality and refuse to go along with the same-sex “marriage” agenda.

Not once in the entire 2,500-word interview is Catholic teaching on sexual morality as it pertains to homosexuality stated.

The Catechism of the Catholic Church teaches that “Basing itself on Sacred Scripture, which presents homosexual acts as acts of grave depravity, tradition has always declared that ’homosexual acts are intrinsically disordered.’”

“They close the sexual act to the gift of life. They do not proceed from a genuine affective and sexual complementarity. Under no circumstances can they be approved,” states the Catechism (2357).

During the interview, Martin tries to keep the spotlight firmly on LGBT people and away from sinful realities.

When asked if Pope Francis’s  2013 “Who am I to judge” remarks were an endorsement of the gay lifestyle, Martin deflected the question, saying that it all depends on what is meant by the “gay lifestyle.” What Pope Francis meant to do with this remark, he said,  was to “move us away from this idea of judging LGBT people as sinners or as the worst sinners.”

Martin called “Who am I to judge?” Francis’s “five most famous words.”

He said it was “quite discriminatory” for Catholics to focus on the “sexual morality” of active homosexuals.

“You don’t have people being fired for living together before being married, for using birth control, for being divorced—you simply don’t. And yet it’s the LGBT person whose life, whose sexual morality is put under a microscope. It’s an instance of what the Catechism of the Catholic Church calls ‘unjust discrimination.’”

The passage of the Catechism partially cited by Martin (CCCC 2358) condemns “unjust” discrimination against “men and women who have deep-seated homosexual tendencies.” It does not, however, outright condemn “discrimination.”

The Congregation for the Doctrine of the Faith has interpreted this passage to mean that some kinds of discrimination against homosexuals are, in fact, just.

“There are areas in which it is not unjust discrimination to take sexual orientation into account, for example, in the placement of children for adoption or foster care, in employment of teachers or athletic coaches, and in military recruitment,” the 1992 document states.

Other examples of “just” discrimination might include the U.S. Catholic bishops who have recently refused to allow unrepentant homosexuals a Catholic funeral or to receive Holy Communion (here, here, and here).

By skirting this and other pertinent issues, interviewer and interviewee mislead both Catholics who experience same-sex attraction and their concerned parents and friends.

Many faithful Catholics who read St. Anthony Messenger will likely be scandalized that a Catholic magazine that congratulates itself on its august past and popularity with Catholic families would give so much space to a high-profile critic of the Catholic Church and her doctrines without challenging either him or his ideas.