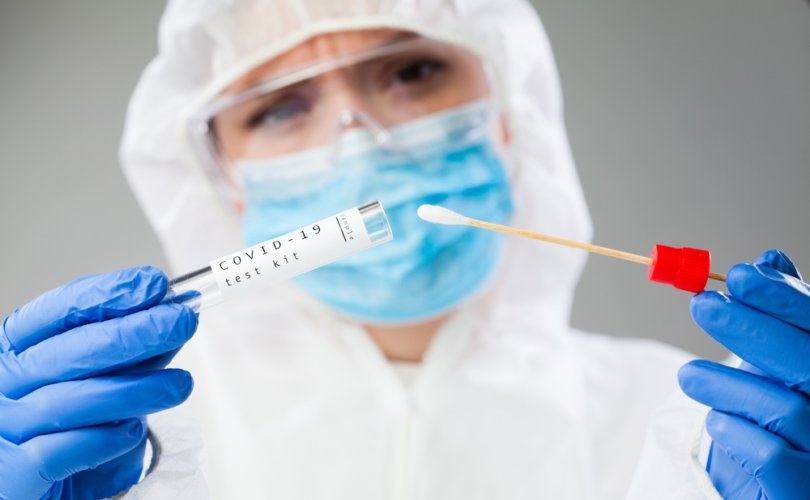 (LifeSiteNews) – A U.K. government-approved COVID-19 PCR testing firm is under investigation after their plans to sell customer DNA taken from their swabs came to light.

This past weekend The Sunday Times reported that one of the largest government-approved COVID-19 testing providers in the U.K., Cignpost Diagnostics, is under investigation by the government’s Information Commissioner’s Office (ICO) data privacy watchdog, after the ICO became aware that the company stated they intend to analyze and/or sell client DNA samples obtained from their polymerase chain reaction (PCR) tests.

The company, which is approved by the U.K. government as a PCR provider and has provided more than 3 million tests since its founding in June, had announced its plans to sell sensitive medical data to third party researchers in order to “learn more about human health.”

According to the Daily Mail, the company, which trades under the name ExpressTest, was not upfront with customers that swabs of their DNA could be sold to “collaborators” including universities and private companies, for medical research.

Instead, customers were asked to agree to a privacy policy which merely linked to another document outlining the firm’s so-called “research programme.”

Further, Cignpost states that besides sharing DNA samples, the firm also retains the “biological samples” and “genetic information” of people who took their tests, which were offered widely at Gatwick, Heathrow, Birmingham, and Edinburgh airports, at a lower cost than most competitors.

It is not yet clear if any swabs have already been sold by Cignpost Diagnostics.

In a statement issued to the Daily Mail, IOC Deputy Commissioner Steve Wood said, “There is no personal data more sensitive than our DNA. People should be told about what’s happening to it in a clear, open and honest way so they can make informed decisions about whether they want to give it up.”

“Testing is a key tool to help people go back out and enjoy life as we emerge from the pandemic. For it to succeed, people must have trust and confidence in how their personal data is used,” Wood added. “That means testing schemes must be fair and transparent and we’ve worked with organisations throughout the pandemic to ensure people’s privacy is considered from the outset.”

According to the Daily Mail, Cignpost Dianostics was approved to be added to a coalition of COVID test providers by the Laboratory and Testing Industry Organization (LTIO), who had promised the public they were creating a “trustworthy” list of companies Britons could turn to for timely and affordable swabs.

The installation of the LTIO arose shortly after the U.K. government announced they were cracking down on the “Wild West” PCR test market, following ministers’ claims that the testing companies were “acting like cowboys” by employing misleading advertisements on government websites.

The LTIO promised the public they were creating a “gold standard accreditation process and kitemark to provide consumer certainty” and would only add companies recommended by the Competition and Markets Authority (CMA) to the official “gov.uk list.”

Together, the CMA and the LTIO placed Cignpost on the founding list provided by the U.K. government.

In a statement given to the Sunday Times, Cignpost insisted they are “in full compliance with all laws related to data privacy” and they have “invested significantly in robust systems and processes to ensure we protect our customers.”

— Article continues below Petition —
PETITION: Ban COVID vaccine mandates for schools and universities!
Show Petition Text
42848 have signed the petition.
Let's get to 45000!
Thank you for signing this petition!
Add your signature:
Show Petition Text

In addition to the privacy concerns, the use of PCR testing has been a cause for controversy in both the scientific and legal communities around the world.

As reported by LifeSiteNews in December 2020, the original scientific paper establishing PCR tests as the way to identify COVID-19 in individuals has been thoroughly debunked by scientists, who call the tests “useless” and “completely unsuitable” to find COVID-19.

A group of 22 scientists termed the International Consortium of Scientists in Life Sciences (ICSLS), examined the original Corman-Drosten paper, in which Real Time Polymerase Chain Reaction (RT-PCR/PCR) tests were proposed as a validated means to detect COVID-19, and reported “ten fatal problems” with the original conclusion.

The first “major” issue identified in the ICSLS review is that the CD paper and the trial PCR tests were written and conducted “without having virus material available,” in the words of the CD paper itself. Instead, the PCR test method was based on “silico sequences, supplied by a laboratory in China.” The CD paper’s aims of development and deployment of a test “are not achievable without having any actual virus material available,” according to the ICSLS.

Further, the ICSLS noted that the proposed PCR test contains “severe design errors,” and since the test is unable to distinguish between “the whole virus and viral fragments” it “cannot be used as a diagnostic for SARS-viruses.” A positive test, as mentioned in the CD paper, cannot determine if one is infected with the virus, but “merely indicates the presence of viral RNA molecules.”

On the legal front, despite widespread use in the nation, Canada actually has a law on the books that prohibits the use of genetic testing as a means of determining if someone has an illness or if they are likely to transmit an illness.

According to Canadian constitutional rights lawyer Rocco Galati, PCR testing is a violation of the Genetic Non-Discrimination Act which was enshrined into Canadian federal law in 2017.

The act prohibits requiring a person to undergo a genetic test, such as a PCR test, as a condition of providing goods or services to a person, or offering or continuing a contract with a person.

“It is a criminal offence punishable by fine, and a maximum of five years in jail, for anyone to conduct a DNA or RNA test to determine whether or not, that person is susceptible to transmitting a disease,” stated Galati.

“Well, isn’t that the PCR test? Isn’t it all the tests they’re conducting for COVID?”