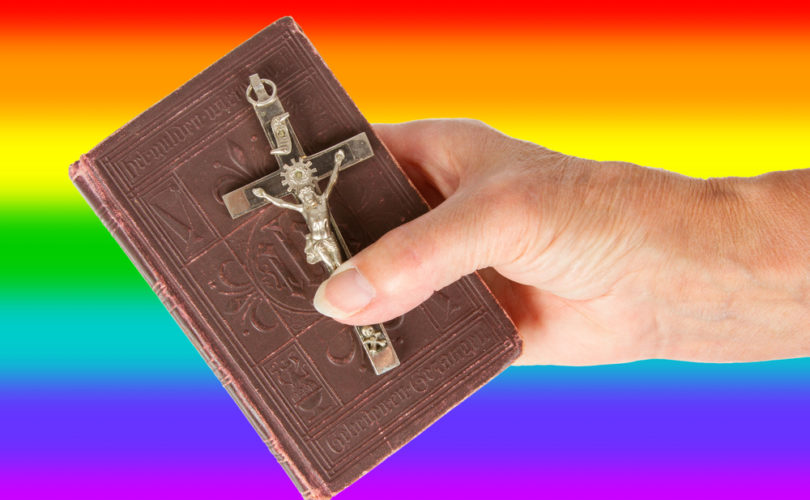 December 17, 2018 (LifeSiteNews) – Two prominent evangelical organizations have formally endorsed federal legislation that would ostensibly protect homosexual Americans from discrimination without infringing on religious exercise, but social conservative leaders warn that the stated principles could still be exploited by pro-LGBT activists.

The boards of the Council for Christian Colleges and Universities (CCCU) and National Association of Evangelicals (NAE) have passed motions endorsing the addition of sexual orientation and gender identity (SOGI) language to federal nondiscrimination law, WORLD reported.

In October, the NAE Executive Council unanimously passed a motion that affirms “God created human beings in his image as male or female and that sexual relations be reserved for the marriage of one man and one woman” and endorses “First Amendment guarantees that protect free religious exercise,” while at the same time declaring, “No one should face violence, harassment, or unjust discrimination on the basis of sex, sexual orientation, or gender identity.”

Because it is currently “easy for legislation supporting religious freedom to be seen as simply permission to discriminate,” NAE board member and Houghton College president Shirley Mullen argues that the “most viable political strategy is for comprehensive religious freedom protections to be combined with explicit support for basic human rights for members of the LGBT community,” in hypothetical legislation called Fairness for All.

Fairness for All is based on a 2015 law known as the Utah Compromise, which supporters hailed as a “truce” in the culture wars and left-wing commentators have derided as a “Trojan horse.”

These LGBT “rights” would “include basic legal and human rights related to housing, credit, jury duty and employment — and do not imply affirmation for particular lifestyle or moral choices,” Mullen said. She further suggested the window of opportunity for such a compromise is closing, as pro-LGBT measures are continually being enacted at the state and local levels.

These strategies “not meant to represent the specific positions of our individual campuses, but rather reflect the wisdom of our board of directors as determined to be in the best interest of advancing Christian higher education in the public square,” the CCCU told WORLD. The group has reportedly distributed analysis of potential legislation in hopes of encouraging lawmakers to introduce it in Congress, while supporters plan to launch coalitions to advocate for the bill.

Others disagree. One NAE board member and 17 individuals associated with CCCU institutions have signed “Preserve Freedom, Reject Coercion,” a statement that argues SOGI laws “empower the government to use the force of law to silence or punish Americans who seek to exercise their God-given liberty” and “create special preference in law for categories based on morally significant choices that profoundly affect human relations and treat reasonable religious and philosophical beliefs as discriminatory.”

Even “narrowly crafted” SOGI laws imperil religious liberty, the statement’s signatories concluded, and “any ostensible protections for religious liberty appended to such laws are inherently inadequate and unstable.”

“Placing sexual orientation and gender identity as protected classes in this kind of legislation would have harmful unintended consequences, and make the situation worse in this country,” said Russell Moore of the Southern Baptist Convention, “both in terms of religious freedom and in terms of finding ways for Americans who disagree to work together for the common good.”

In response to the WORLD report, Family Research Council policy analyst Peter Sprigg asked Fairness for All proponents to define their terms.

“Is it ‘unjust discrimination’ for a Christian baker to decline to bake a cake to celebrate a same-sex wedding in violation of his own conscience?” he wrote. “Or for that matter, is it ‘harassment’ for a schoolteacher to refuse to use pronouns that falsify the sex of a student who identifies as transgender?”

Heritage Foundation senior research fellow Ryan Anderson argued that Fairness for All “creates bad public policy and then tries to forestall some of its worst consequences,” such as forcing businesses and other institutions to adopt definitions of gender they disagree with or accept behavior they consider immoral. “To impose bad public policy on one’s neighbors while exempting oneself is not the way in which we serve the common good,” he said.

Instead of simply adopting policies like those championed by the LGBT lobby, Anderson wrote that any legitimate government response to alleged LGBT discrimination must first verify that “material harm” has occurred, not just perceived slights to LGBT “dignity.” If so, lawmakers must then answer, “Are the needs of such a magnitude and extent as to warrant government attention?” and “Are social, economic, and cultural forces sufficient to address these needs on their own?”

“Most important, any such policy must define what constitutes ‘discrimination’ accurately,” Anderson noted. “Part of the problem with SOGIs, including FFA, is that they leave it entirely at the whim of hostile bureaucrats and judges to declare that commonsense actions are ‘discrimination,’” such as refusing to bake for a same-sex “wedding” or insisting that foster or adoptive children be placed with both a mother and a father.