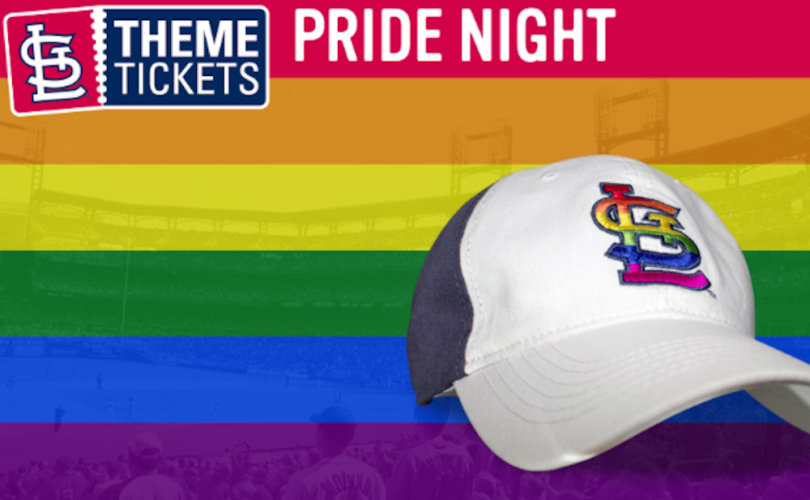 ST. LOUIS, Missouri, August 25, 2017 (LifeSiteNews) — One of America’s most beloved sports teams has invited a transgendered woman to throw out the first pitch at what is being called “Pride Night.”

The St. Louis Cardinals, in partnership with Pride St. Louis, have asked “Tassandra Crush” to take the mound before their game against the Tampa Bay Rays at Busch Stadium later this evening.

Pride St. Louis coronated Crush its “Queen of Pride” in 2017.

The Cardinals for years have hosted an unofficial “LGBT” night in conjunction with Just John Nightclub, a local gay bar. But Friday’s event is the first official function the franchise is hosting specifically for the “LGBT community” at its ballpark.

On their website, the Cardinals promise that “A portion of each ticket sold will benefit the Pride STL Scholarship, which is awarded annually to St. Louis area students. Come early and enjoy a pre-game performance in Riverview Corner by the Gateway Men's Chorus.”

Gateway Men’s Chorus is a St. Louis-based, pro-homosexual organization founded in the late 1980s. It’s mission is to “affirm and promote gay culture and acceptance through excellence in musical performance and education.”

“Pride Night” is seen by some as a form of penance for the team’s decision to host former Cardinals great Lance Berkman at the organization’s Christian Day celebration last season.

Berkman was fiercely criticized by Pride St. Louis and others when in 2015 he publicly opposed a Texas transgender bathroom bill. His appearance at Christian Day, an event that has been going on for three decades, was protested by pro-LGBT groups.

Major League Baseball is slowly but surely succumbing to the gay agenda. Transgender woman Rachel Lauren Clark, board secretary for Pride Toronto, threw out the first pitch at a Toronto Blue Jays game in 2016. Organizations like the Chicago Cubs and the New York Mets have spearheaded efforts to normalize homosexuality as well.

In 2014, former commissioner Bud Selig named Billy Bean the league’s first Ambassador of Inclusion. MLB.com reports that the purpose of the position is to “provide guidance and training related to efforts to support those in the [LGBT] community throughout Major League Baseball.”