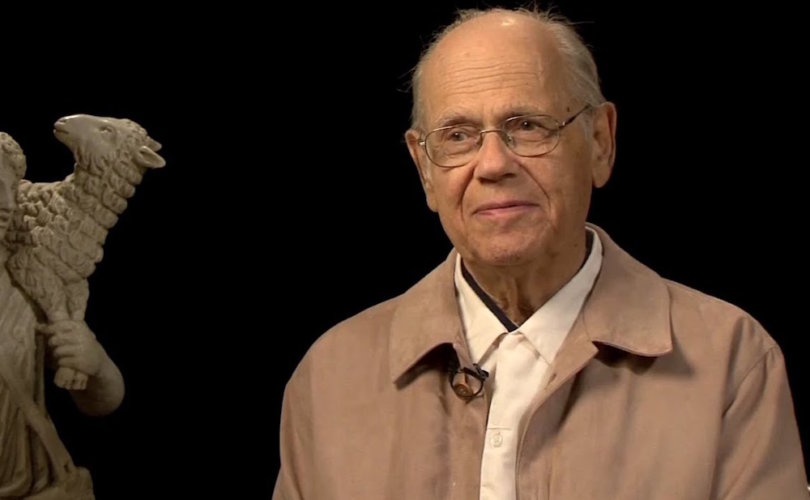 February 17, 2017 (LifeSiteNews) — 93-year-old Gregory Baum, a famed Canadian Catholic ex-priest, has in his latest book revealed that he secretly led an active homosexual life for decades.

Baum, who was a peritus or expert at the Second Vatican Council, reportedly composed the first draft of the conciliar document Nostra aetate, the Declaration on the Relation of the Church with Non-Christian Religions. Baum advocated for the elimination of the Church’s efforts to encourage Jews to recognize Christ as the Messiah and has since pushed social justice and liberation theology.

The influential cleric reveals candidly in The Oil Has Not Run Dry: The Story of My Theological Pathway, “I did not profess my own homosexuality in public because such an act of honesty would have reduced my influence as a critical theologian.” “I was eager to be heard as a theologian trusting in God as salvator mundi and committed to social justice, liberation theology, and global solidarity.”

Baum was also influential in the Catholic Church in Canada despite his openly heretical positions on sexuality, which he published in various journals. His public dissent from the 1968 declaration of the Church maintaining the ban on contraception — Humanae Vitae — was instrumental in the Canadian bishops’ own dissent from the encyclical of Pope Paul VI. As the foremost expert on the Canadian bishops’ dissent, Monsignor Vincent Foy has written, “If it had not been for the black shadow of Baum over Winnipeg, his influence over some Bishops, the Canadian theological establishment and pressure groups, the Winnipeg Statement of the Canadian Bishops on Humanae Vitae would not have refused to endorse the teaching of the encyclical as it did.”

In his new book, Baum writes, “I was 40 years old when I had my first sexual encounter with a man. I met him in a restaurant in London. This was exciting and at the same time disappointing, for I knew what love was and what I really wanted was to share my life with a partner.”

He says he considered resigning from the priesthood but didn’t go through with the formality, rather choosing to announce it in the national newspaper. He later married a divorced ex-nun who he says “did not mind that, when we moved to Montreal in 1986, I met Normand, a former priest, with whom I fell in love.” Normand, he explains, “is gay and welcomed my sexual embrace.”

Dr. Michael Higgins, the vice president for Mission and Catholic Identity at Sacred Heart University in Fairfield, Connecticut, in a tribute to Baum published in Commonweal in 2011 noted his key role during Vatican Council II. “The council was the making of Gregory Baum,” he wrote. “He served in various capacities on the commissions charged with preparing documents. … Beginning his work in November 1960, he concluded it with the council’s end in December 1965, an apprenticeship that culminated in his writing the first draft of Nostra aetate.”

Noted Toronto Catholic priest, and now Vatican consultant, Fr. Thomas Rosica, hosted a controversial appearance by Baum at the Catholic Newman Centre of the University of Toronto in 1996 and in 2012 made him a featured guest on his Canadian Catholic TV station Salt and Light Television.

Fr. Rosica, during the fawning interview with Baum, professed to having known Baum for a long time. “I’ve certainly admired very much your theology, your writings but also your love of the Church, your love of Christ, and you helped to keep alive not only the spirit of the Second Vatican Council but also the authentic teaching of the Council,” Fr. Rosica said of Baum.

Monsignor Foy, on the other hand, considers Baum as having “done more than any person to harm the Church in Canada.”