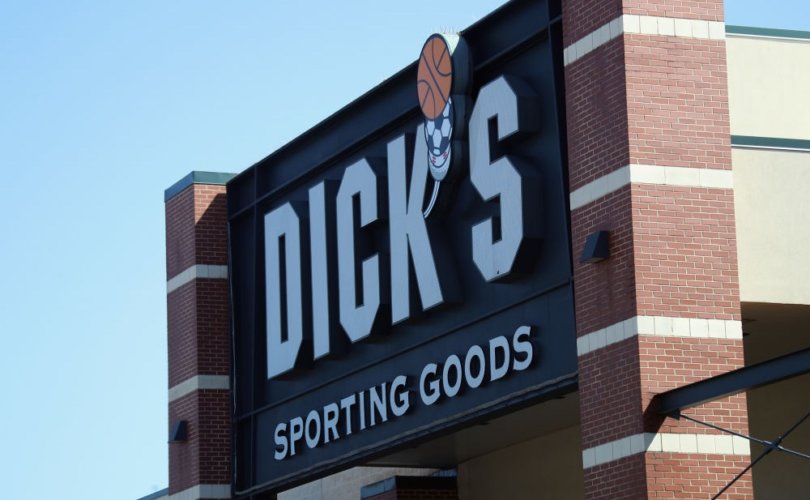 (LifeSiteNews) — A conservative legal group has filed a federal civil rights complaint against DICK’S Sporting Goods for offering a financial benefit for abortion without an equivalent benefit for childbirth.

The group also alleges the company violated the law through woke hiring practices centered on race and sex.

A statement released by AFL on July 13 noted DICK’S had “announced a special employment benefit of ‘up to $4,000’ in travel reimbursement for a[n] employee, spouse, or dependent, along with one support person, to obtain an abortion.”

The company’s announcement came after the U.S. Supreme Court overturned Roe v. Wade in the Dobbs v. Jackson Women’s Health Organization case last month, thereby ending the federal “right to abortion” and returning the right to regulate abortion back to the states. Many pro-life states have moved to enact restrictions or bans on abortion in the wake of Dobbs, and pro-abortion states have conversely expanded its availability.

According to the AFL complaint, DICK’S’ decision to reimburse women for traveling out of state for abortions while failing to “offer an equivalent paid benefit to a mother who has her baby” violated Title VII of the Civil Rights Act of 1964, as amended by the Pregnancy Discrimination Act of 1978, which “prohibits discrimination based on childbirth.”

The complaint was filed via AFL’s Center for Legal Equality, which fights institutional bigotry. If YOU are a victim of “equity” contact us NOW: https://t.co/FE6Cxb1qnC. 2/2

In a letter addressed to the EEOC, the conservative legal group argued that DICK’S “decision to provide the ‘travel benefit’ — which is properly classified both as compensation and/or as a privilege of employment — to a pregnant woman who chooses to abort her child, while denying any equivalent compensation or benefit to a pregnant woman who chooses life, facially violates the statute.”

In a separate letter addressed to the corporate leadership of the sporting goods chain, the AFL stated that “[e]ven if legal,” DICK’S policy regarding abortion-related travel reimbursement “raises serious concerns regarding management’s commitment to maximizing shareholder value.”

“We note with concern that you cited no facts suggesting that providing benefits to facilitate abortions, without making at least the same amount available to mothers who give birth, is in the Company’s best interests,” the group said. “Rather, the empirical evidence indicates management’s discriminatory conduct on an issue of such intense public interest and concern that is otherwise wholly detached from the Company’s business (selling sporting goods and golf equipment) may needlessly destroy shareholder value.”

In a statement, AFL senior counselor and director of oversight Reed D. Rubinstein slammed the sporting goods store’s decision to subsidize abortion travel while denying equivalent benefits to mothers who don’t kill their children as “perverse and unlawful.”

“It’s just so pernicious, and so divisive, and so dangerous, and so utterly disconnected from the business, in this case, selling sporting goods,” Rubinstein also told the Daily Caller. “It needs to be called out and it needs to be stopped.”

The AFL is also seeking an investigation into DICK’S for its promotion of another leftist priority.

According to the group, DICK’S is also violating the law by “[u]sing racial balancing and quotas in hiring and promotion.”

Citing company documents in which the corporation touts its woke racial quotas, particularly in “recruiting, hiring, and/or promoting workers” on the basis of their “race, color, national origin, or sex,” the AFL argued that DICK’S hiring practices also violate Title VII and are therefore “patently illegal.”

Asking the EEOC to conduct an investigation into the company’s hiring practices and unbalanced financial incentivization of abortion, the AFL argued that DICK’S is “violating their fiduciary duty to shareholders by spending the Company’s funds to advance idiosyncratic political and social views.”

According to Rubinstein in the AFL’s July 13 statement, “DICK’S management is an avatar for the rot and danger of corporate wokeness.”

DICK’S did not immediately respond to LifeSite’s request for comment.

A spokesman for the EEOC told LifeSite in a Thursday email that the EEOC “can confirm receipt of the letter from America First Legal” but “cannot provide further comment.”

“Under federal law, information on possible charges (complaints) made to the EEOC is strictly confidential. EEOC cannot confirm or deny the existence of a charge and we are prohibited from releasing any information about charges or any investigation of possible charges,” the email read.

Meanwhile, DICK’S Sporting Goods is just one among many corporations, including Amazon, Apple, Citibank, Salesforce, Tesla, Microsoft, Starbucks, Google, and Yelp, that have offered to pay travel expenses so that female employees in pro-life states can travel to kill their unborn babies.

READ: Major corporations vow to pay employees’ travel costs to get abortions out of state

Democrat-led states, including California, Oregon, Washington, and New York, have also explicitly encouraged women to travel to their states to get abortions.

In response, pro-life lawmakers and attorneys have begun strategizing on how to curtail the phenomenon, which has become known as “abortion-tourism.”The Washington Post reported that conservative Thomas More Society “is drafting model legislation for state lawmakers” based on Texas’ unique enforcement mechanism for its heartbeat bill.

In the Thomas More Society’s model, private citizens would be empowered to “sue anyone who helps a resident of a state that has banned abortion from terminating a pregnancy outside of that state,” the Post reported.