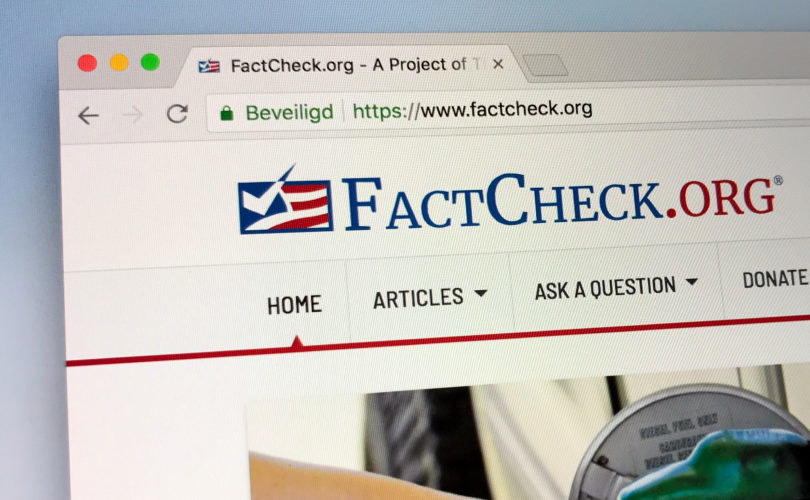 April 27, 2021 (LifeSiteNews) — A U.S. congressman has highlighted the fact that a Facebook-partnered website’s COVID-19/Vaccination “fact-checking” project is funded by a group that holds $1.9 billion in Johnson & Johnson stock and is headed by the former director of the Centers for Disease Control.

“Bless your heart if you think factcheck.org is an unbiased source of vaccine information,” he continued.

Massie attached a screenshot from Factcheck.org in which the site explains that its SciCheck “COVID-19/Vaccination Project is made possible by a grant from the Robert Wood Johnson Foundation,” which it reveals is worth $53,501.

SciCheck is a section of the FactCheck website that it says “focuses exclusively on false and misleading scientific claims that are made by partisans to influence public policy.”

SciCheck has now become wholly devoted to “debunking” criticism of vaccines, masks, and other COVID-19 related concerns, attempting, for example, to refute Tucker Carlson’s questioning of the effectiveness of the vaccines.

“Vaccines benefit those who have had COVID-19, contrary to viral posts,” is the title of another recent SciCheck article.

The CEO and president of the group that funds the SciCheck arm of the FactCheck.org site, the Robert Wood Johnson Foundation (RWJF), is Richard E. Besser, who has led RWJF since April 2017. His bio on the RWJF website, which Massie also screenshotted, explains that “Besser is the former acting director for the Centers for Disease Control and Prevention.”

Besser’s bio further explains that before joining ABC News in 2009, where he was the chief health and medical director, he worked as director of the Coordinating Office for Terrorism Preparedness and Emergency Response at the CDC,” and “He also served as acting director of the CDC from January to June 2009, during which time he led the CDC's response to the H1N1 influenza pandemic.”

The CDC, which proclaims that it “works 24/7 to protect America from health, safety and security threats,” has been frequently reproved for conflicts of interest and unethical practices that critics claim compromise its mission of promoting public health.

The Association of American Physicians and Surgeons (AAPS) shared an editorial last year on “Bias and Disturbing Conflicts of Interest” at the CDC, and noted, “In 2016 a group of more than a dozen senior scientists at the CDC lodged an ethics complaint alleging that that the CDC was being influenced ‘by corporate and political interests in ways that shortchange taxpayers.’ They noted ‘the pervasive nature of unethical practices throughout all levels at the CDC,’” AAPS wrote.

The author of the editorial, the editor-in-chief of the Journal of American Physicians and Surgeons, Lawrence R. Huntoon, M.D., Ph.D., concluded, “The CDC has a long history of bias and troubling conflicts of interest. This history calls into question the scientific validity of recommendations made by the CDC.”

Huntoon noted, “In 1983, the CDC became authorized to accept 'gifts' from industry and other private parties,” and that the creation of the non-profit CDC Foundation in 1992 “greatly expanded the CDC’s ability to accept private funding.”

“As donations to the CDC Foundation started pouring in, the door to conflicts of interest and corruption was opened wide. The CDC accepts millions of dollars in 'conditional funding' from entities, including pharmaceutical corporations. This funding is 'earmarked for specific projects,'” Huntoon continued.

As an example of one such conflict of interest, Huntoon recounted how the CDC Foundation “accepted conditional funding” from the pharmaceutical and diagnostics company Roche “for the Take 3 flu campaign.” The CDC thereafter cited a study sponsored by Roche in support of its recommendation of influenza antiviral drugs (e.g. oseltamivir), claiming the study was independent. However, “All four authors had financial ties to Roche, Genentech, or Gilead (the first two sell oseltamivir and Gilead holds the patent),” Huntoon explained.

Robert Kennedy Jr. has also blasted the CDC for corruption. “The CDC is actually a vaccine company,” he told RT America in 2020.
“The CDC has a total budget of about $11 billion a year, and $5 billion of that buying vaccines from those four companies making sweetheart deals. And then they distribute those vaccines to the American public,” Kennedy said.

“The CDC also owns patents on many of the vaccines. In fact across the HHS, which is the mother agency (of) FDA, CDC and NIH, which all regulate vaccines, different parts of the vaccine industry are all parts of HHS, and those agencies are allowed to hold patents on the vaccines that their scientists work on, and then collect royalties.”

“And in fact, officials in those agencies, who worked on the vaccines, can also own part of the patent and collect royalties of up to $150,000 a year. So every bottle of Gardasil that is sold, HHS is making money on it. They make tens of millions of dollars a year.

Interestingly, while Factcheck.org has directly denied Rep. Massie’s accusation of bias in the article, “SciCheck and our Commitment to Transparency,” it ignores the possibility of bias stemming from Besser’s former role at the CDC.

In fact, far from attempting to extricate themselves from CDC interests, they treat it as an unquestionably reliable source for their fact checking work, admitting this in the same article: “In researching claims, we rely on primary sources of information, such as the Centers for Disease Control and Prevention, Food and Drug Administration and National Academy of Sciences,” they explain.

“For SciCheck articles, for example, that might mean reviewing the CDC’s Morbidity and Mortality Weekly Reports and its data on COVID-19 cases, deaths and vaccinations, as well as the FDA’s briefing document for each vaccine.”

FactCheck.org defended itself against Rep. Massie’s accusation of bias, saying, “Contrary to Massie’s suggestion, the Robert Wood Johnson Foundation — as is the case with all of our funders — has no control over our editorial content. Period. Full stop.”

However, Massie nowhere says that RWJF has “control” over FactCheck.org’s editorial content. It is commonly acknowledged that outside parties can exercise influence upon an organization in a more indirect manner, such as through quid pro quo exchanges.

As Rep. Massie pointed out, FactCheck.org has also admitted in that same article that their vaccine fact-checking donor, RWJF, “reported that, as of Dec. 31, 2019, it had nearly $12 billion in total assets, including $1.9 billion in Johnson & Johnson stock.” They even share the fact that RWJF “was founded by the late Robert Wood Johnson II, who was president of Johnson & Johnson from 1932 to 1963.”

It is notable that Factcheck.org touts itself as an unbiased group dedicated to “the facts.” They describe themselves as a  “nonpartisan, nonprofit ‘consumer advocate’ for voters that aims to reduce the level of deception and confusion in U.S. politics.”

“We monitor the factual accuracy of what is said by major U.S. political players,” the site continues.

However, a cursory review of their website reveals that aside from COVID-19 related concerns, their articles overwhelmingly defend liberal partisan policies, and attempt to undercut conservative positions: “Capitol Protestors Were Armed With a Variety of Weapons,” “Bogus Claims About Biden’s Treatment of Homeless Veterans,” and “MyPillow CEO’s Video Rehashes Debunked Election Fraud Claims,” are a few articles that showcase a cross-section of the site’s content.

It is also noteworthy that FactCheck.org partnered with Facebook “shortly after the 2016” allegedly in order to “debunk hoaxes and malicious falsehoods posted on the social media site,” according to the University of Pennsylvania Almanac.