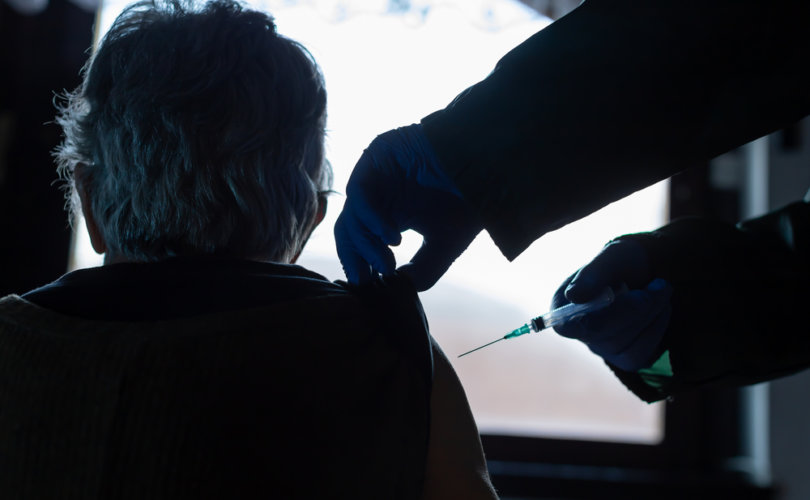 (WND News Center) – Nearly 80% of the omicron variant cases in the United States were found in people who were fully vaccinated, according to the Centers for Disease Control and Prevention.

The CDC reflected data from Dec. 1-8, showing that 34 of the 43 known cases, or 79%, were “fully vaccinated.” And one-third of the 34 cases were people who had received a third “booster” shot.

Only one of the omicron patients was hospitalized, and none died.

In Israel, where most of the population has received a booster shot, 54 of 67 omicron cases, 80%, were people who had received three COVID-19 shots.

However, Fauci said Sunday that federal officials are evaluating whether or not to urge Americans to get a booster shot to be considered fully vaccinated.

“But I think if you look at the data, the more and more it becomes clear that if you want to be optimally protected you really should get a booster,” he told George Stephanopoulos on ABC’s “This Week.”

On Monday, Dr. Marty Makary of Johns Hopkins University pointed to a study that found the long-term T-cell immunity is strong and effective against omicron.

“This is the most significant (and overlooked) scientific paper of the entire Omicron saga,” he wrote on Twitter. “The fixation on antibody levels has diverted attention away from comprehensive immunity, including cellular.

In South Africa, where researchers were the first to report the omicron variant to the WHO, researcher Pieter Streicher said that in his country immunity from prior infection is high, about 70% of the population.

And with omicron becoming dominant, he said on Twitter, “the sense in [South Africa] is that the pandemic is almost over.”

South Africa has seen a significant decrease in hospitalizations and deaths from COVID in recent weeks. Researchers estimate deaths due to omicron in South Africa will reach about 640, which is 25 times lower than with delta, 15,400.

Dr. Angelique Coetzee of the South African Medical Association said in an interview with the British independent broadcaster LBC that after four weeks of omicron in her country, “there’s no reason why you can’t trust us when we say it’s a mild disease.”

In Britain, where Prime Minister Boris Johnson has imposed new restrictions in response to omicron, the U.K.’s deputy prime minister said Tuesday he “misspoke” when he said the number of people with omicron in U.K. hospitals was 250.

The number actually is 10, Dominic Raab clarified in an interview with “Good Morning Britain.”

See a “Good Morning Britain” host scold the deputy prime minister for getting the numbers wrong:

‘You’ve done two interviews this morning, you were asked a simple question, how many people are in hospital? You told Sky News 250 people and you told BBC Breakfast 9.’

Dominic Raab clarifies 10 people are in hospital with Omicron, after getting the numbers wrong. pic.twitter.com/MYccrkXIsN