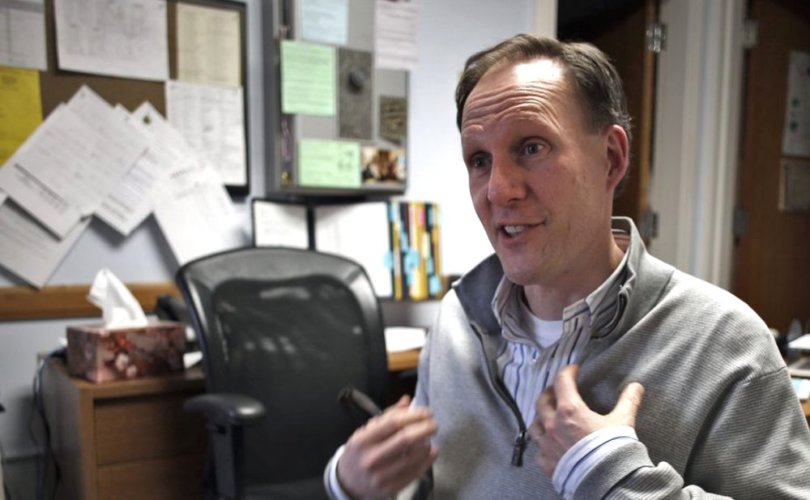 SWAMPSCOTT, Massachusetts, February 13, 2018 (LifeSiteNews) – A 52-year-old Elementary school principal announced to his school community that he is a 'woman' and will begin dressing up as a female in school.

Stanley School Principal Tom Daniels wrote students, parents, teachers, and administrators on February 6, telling them that he will be using the name “Shannon.” He stated his preferred pronouns.

“I can now say it: I am transgender. For me, that means I identify as both a male and female, and I plan to move toward presenting myself and identifying as female,” he wrote, adding: “As I nurture my new identity, I will most likely be presenting myself differently. “

He explained in a letter that he has had feelings like he’s a girl for forty years, and now has the courage to “do the right thing” and present as female.  Shannon is his middle name and because it is androgynous, it “perfectly denot[es] my fluid gender.”

Family Research Council’s (FRC) Peter Sprigg told LifeSiteNews that children will likely be confused and distressed to witness the 'transition' of their male school principal.

“Children do not have the cognitive capacity to understand something which could upend their own developing sense of a secure, natural identity as male or female,” the FRC Senior Fellow for Policy Studies explained.

“Mr. Daniels’ case is even more extreme (and likely confusing to the children), because he is not merely changing from a [male to female] identity, but claims that he identifies ‘as both a male and female,’ but is going to ‘move toward’ presenting and identifying as female,” the family advocate continued.  “Children should not be subjected to such social engineering.”

Daniels, who has been married 29 years and has fathered three children (16, 18 and 23), said he woke up one morning thinking, “Who am I and what do I want?”  He answered himself, “Internally I’m a female and I want to be one.”

“This is exactly why ‘gender identity’ should not be a protected category in non-discrimination policies or laws,” Sprigg concluded, “because there are circumstances in which changing gender identity can actually harm others. We have already heard anecdotal accounts of children who fear that they will turn into the opposite sex —even though they have no desire to do so.”

Superintendent Pamela Angelakis is helping Daniels to 'transition.' She praised his “courage, honesty and transparency.”

Both Principal Daniels and Superintendent Angelakis have told parents how they can discuss the 'transition' with their children.

Other school officials across the country have also declared that they are transgender.

Last year female principal Asa Sevelius of Heath School in Massachusetts announced that she was “transgender” and would begin the 'transition' to male. In 2014, male teacher Robert Reuter declared himself transgendered and demanded that everyone at Janney Elementary School in the Washington D.C. area refer to him as “Ms. Rebecca Reuter.”