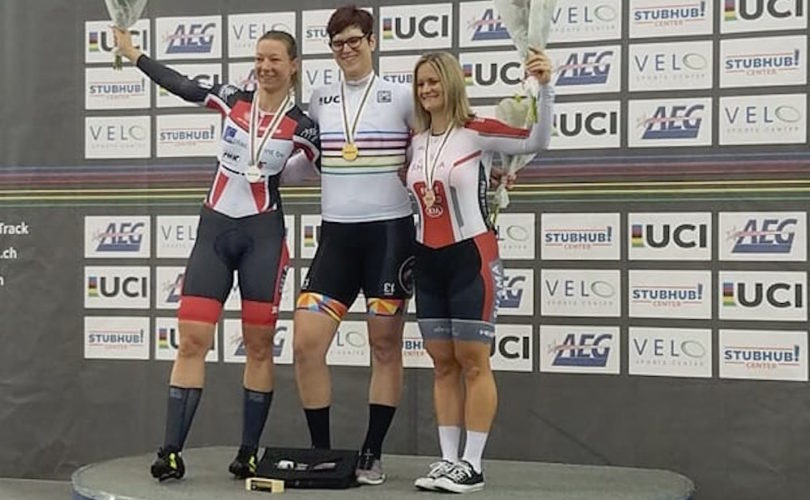 McKinnon, who is on the faculty at South Carolina’s College of Charleston, won the women’s sprint 35-39 age bracket in Los Angeles on Saturday, Cycling Magazine reported. “First transgender woman world champion … ever,” McKinnon boasted on Twitter.

He defeated female competitors Carolien Van Herrikhuyzen of the Netherlands and Jennifer Wagner of the United States. In the quarterfinals, McKinnon briefly set a world record of 11.92 seconds for 200 meters, though another competitor beat it just minutes later.

McKinnon’s participation in the bracket was made possible last year when another Canadian trans cyclist, Kristen Worley, won a “human rights” settlement that secured a commitment from Cycling Canada, the Ontario Cycling Association, and the UCI to lift their previous restrictions on gender-confused athletes.

But while pro-LGBT groups such as PinkNews are celebrating the news as a milestone for “equality,” critics argue that letting men who merely declare “womanhood” compete with actual women puts the latter at an unfair disadvantage. McKinnon spent part of his Sunday disputing the point on Twitter, arguing that “there's no relationship, in any gender, between endogenous testosterone and performance.”

Yet USA Today quoted McKinnon in January as declaring that the truth about performance advantages was “largely irrelevant” because recognizing trans “women” in sports “is a rights issue.”

“By catering to cisgender people’s views, that furthers transgender people’s oppression,” she declared. “When it comes to extending rights to a minority population, why would we ask the majority? I bet a lot of white people were pissed off when we desegregated sports racially and allowed black people. But they had to deal with it.”

At the American Thinker, Rick Moran summarized McKinnon’s comments as arguing “sports is not really about competition” anymore, reducing it to “just another extension of the culture wars.”

“While elite female athletes will defeat many males, they cannot defeat elite male athletes, who will beat any and all women, no matter how well trained and in excellent shape they are,” he argued. “This is a fact of nature, of good old-fashioned science, and no amount of pretending otherwise will make a difference.”

Moran accused athletic governing bodies that have surrendered to transgenderism – which include the organizers of the Olympics and the Boston Marathon – of “pretend(ing) to agree with McKinnon” because they, “and most female athletes, are terrified of a backlash from social justice warriors.”

But “cis” critics aren’t the only ones to dissent from McKinnon’s claims. Inquisitr quotes another “transgender woman” cyclist, Jillian Bearden, as admitting that he proved “how powerful testosterone is from when I competed” as a man. “The hormone provides a certain stamina that continues to charge you. It gives you that edge of pushing power.”

In his academic profile at the College of Charleston, McKinnon says his research covers “a variety of issues in feminism and feminist philosophy, particularly issues relating to gender and queer identities,” as well as “problems that I see with allies and ally culture, and how these connect to gaslighting and epistemic injustice.”