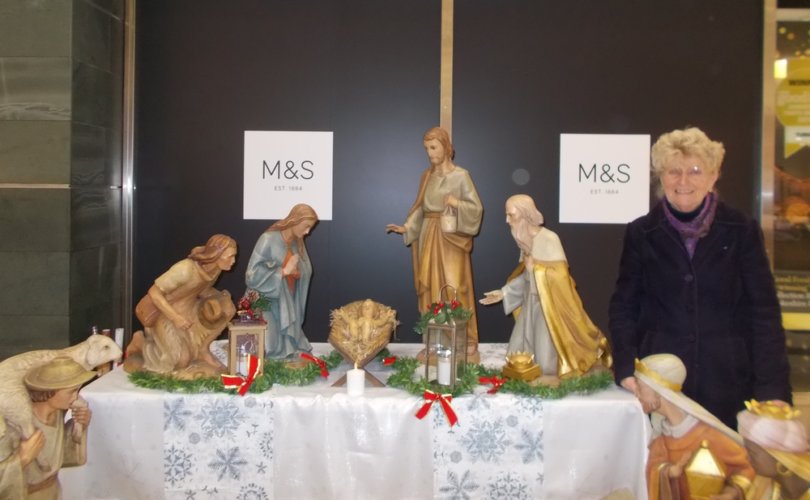 STIRLING, Scotland, December 17, 2018 (LifeSiteNews) – A shopping mall in Scotland hosted a nativity scene it previously barred from its Christmas decor because that it wished to remain “religiously neutral.”

The nine figure set, sponsored by the local Legion of Mary group, was set up outside the Marks and Spencer grocery store in Stirling’s Thistles Centre on Sunday morning.

Thistles Centre became the focus of controversy earlier this month when its management rejected Legion of Mary member Margaret Paterson’s application to set up a “crib,” or traditional manger scene, as part of the mall’s annual Christmas decor. When Stirling’s Member of Parliament Stephen Kerr asked Thistles’ management to reconsider, they refused, saying that the mall “prides itself on being religiously and politically neutral.”

They also claimed that their clientele would be offended by a manger scene, saying, “Our customers come to enjoy a leisure activity without being subjected to individual organisations’ beliefs.”

The management then underscored that they were not willing to reconsider and hoped the MP would accept their decision as final.

Nevertheless, the mall did relent after media reported the story, sparking widespread objections to the ban. Two young Scottish Catholics staged a “living nativity” at the Thistles Centre to raise awareness of both the ban and the true “reason for the season.” A video of the pair dressed as Mary and Joseph was viewed on social media over 80,000 times. Last week a spokeswoman for Standard Life, the firm that owns Thistles Centre, telephoned Paterson, inviting her to bring her proposed nativity scene after all.

“It’s been wonderful,” Paterson told LifeSiteNews on Sunday afternoon. “People have stopped by, and they’ve been so pleased.”

She said that she and other members of Stirling’s Legion of Mary spent the day talking to people eager to ask or chat about the manger scene. Children had been telling them about their nativity plays at school and what roles they had played in them. Some shoppers had taken photos of the scene.

This was the second year Paterson had applied to bring the crib set. Last year she was told she had applied too late. And far from wanting the scene to be at Thistles for the entire length of the Christmas shopping season, Paterson had asked the mall to host it for just one day.

Nevertheless, Paterson holds no grudges and paid tribute to the role the shopping centre, which employs about two thousand people, plays in the community.

“We stressed that people shouldn’t boycott [the Centre] because that hurts the town [economically],” Paterson said. She was just happy that she was able, for a day, “to put Christ in the center again.”

“People of faith and no faith remember that Christmas is Christ-Mass,” she said.

Paterson told LifeSiteNews that she was “surprised” at how news of her request to set up the crib set had “exploded,” and that her daughter had been “tickled pink” to see the news in an Irish newspaper while traveling.

Paterson credits the actions of the “living nativity,” John Mallon and Elena Feick, as “the straw that broke the camel’s back” of the mall’s refusal to host the scene.

“That’s the thing about Margaret,” he told LifeSiteNews. “She never gives up.”

The Legion of Mary agreed that they would put up the scene at 10:30 a.m. and then dismantle it at 4:45 p.m. Thus, the nativity scene is no longer at the mall of this writing. Nevertheless, the shopping centre remains lavishly decorated for “Christmas Shopping at Thistles,” with a “Christmas market,” Santa’s grotto, a red reindeer, and twinkling lights. Shoppers are even encouraged to take selfies with an enormous teddy bear.