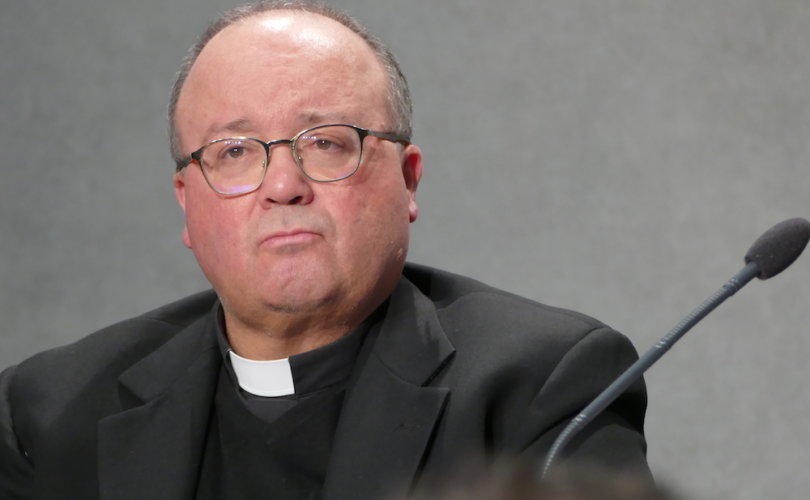 September 20, 2019 (LifeSiteNews) — A Maltese man who has used hormones to “transition” into a woman has told the local press about his “amazing” experience when he was invited to teach at a Church school as part of his university training for a master’s in teaching.

“Amanda” Cossai, 27, in a lengthy interview with The Independent in Malta, related how he was assigned classes in accounting and economics for children aged 13 and 14.

According to a Facebook post by a lecturer at the University of Malta, it was that body that chose a Catholic school for its student to complete its academic curriculum with concrete experience.

“She [sic] is our student and we did our utmost to ensure there would be no hitches in her [sic] field placement. I must say that the school she [sic] was sent to is exceptional in this regard (as in, very receptive to diversity) but on a general level, both as a parent and as an educator, I can observe that schools are very understanding and accommodating, indeed see diversity in their staff as an asset. This is particularly so when it comes to church schools — be it religion, sexualities, political beliefs, race, etc. After all, the teaching staff must reflect society at large,” wrote Michelle Attard Tonna in a comment on Cossai’s interview.

It is not clear which school Cossai was actually sent to, only that it was a Church-run school. Catholic schools in Malta receive partial state-funding. A message on Cossai’s Facebook page last April stated: “First teaching experience complete. Despite being a trans person who was placed in THE Church school, the love and respect shown by students and staff have made this an unforgettable experience.”

Reference to “THE” Church school would appear to indicate that the most prestigious Catholic school was involved. According to some, this might be referring to the Archbishop’s Seminary Secondary School – the “Little Seminary,” a boys’ high school that offers the pre-stages of priestly formation.

At any rate, a confessional, Catholic school officially opened its doors to a transgender person who is vocal in defending “LGBT rights” and who even participated in a video ad for “Happy Pride Week” broadcast by The Malta Independent.

In the interview, the newspaper wrote, Cossai made clear that “the students were very welcoming … having decided prior that she [sic] would be open with them about being transgender from the first day she met them,” saying: “I think they respected me a lot more being upfront.”

The explanations given to the students left these in complete silence, but prompted them to “end up talking about LGBT related subjects,” Cossai remarked with satisfaction. Using words like “openness” and “respect” — as required by “religious teachings” — the apprentice teacher admitted to having spoken about transgenderism and the “transitioning” experience during classes.

This was not contrary to the school’s wishes. According to The Independent, “the staff were told beforehand that Amanda was transgender but when he got there they assured him that they want to take this as an opportunity to present something new to the students.”

They “wanted someone there to show the students and staff that being different is ok,” said Cossai. The only bothersome remark evoked in the interview was a question as to “what her [sic] name was before transitioning, which Amanda felt was too personal and did not want to answer.”

“She [sic] said that the question was probably innocent as the students are young and ‘it is something they will learn.’ However, it did show that they took an interest,” wrote The Independent.

Here, the word “innocent” is construed as meaning that a child or adolescent unwittingly does harm by not realizing that not fully respecting a person’s chosen gender is something bad.

Cossai admitted that parents “may be completely against the idea of their children having a transgender teacher.” It is not clear whether parents were consulted before their children were asked to follow classes taught by a militant transgender, but Cossai did remark that “her [sic] goal is to change people’s perception, although teaching her subjects remains her priority.”

“In general, the country is progressing, Amanda noted,” according to The Independent, “and the laws do help because people are constantly being exposed to the subject. ‘However, it is not as … good as it is made out to be.’”

“Constant” exposure under pressure of the law, in this light, cannot be seen otherwise than as deliberate propaganda, and in this case, a Catholic school has aided and abetted it by allowing a transgender teacher to present the situation as totally acceptable.

Heavy pressure has been put on all Maltese schools to be “accepting” toward “LGBT” staff and students, since Malta has with unbelievable rapidity moved from being a socially conservative, deeply Catholic island exception in the progressive E.U. to the “number one” country among the 49 Council of Europe members in terms of respect for “human rights and equality,” according to a classification by ILGA-Europe (International Lesbian, Gay, Bisexual, Trans and Intersex Association).

Abortion still remains a penal offense, and legal divorce was introduced in Malta only in 2011, but since then, a whirlwind of pro-LGBT legislation has been introduced and made into law. The first step was the legalization of civil unions in 2014, and “equality” legislation is more and more “inclusive.” Malta became the first member-state in Europe to penalize “conversion therapy” in 2016, an event saluted by Time magazine.

“Up until 2014 we had no rights here, but once civil unions were enacted people changed their attitudes overnight. Everyone is afraid of the unknown, but now they’ve seen there’s no threat to society, they’re fine with same-sex partnerships,” remarked a gay activist in that article.

The European Union’s pressure on its new member country — Malta joined the EU in 2004 — was designated as the driving force behind the spectacular changes.

Now, extensive guidelines published by the Ministry of Education in Malta compel all schools to take students’ chosen gender and “orientation” (whatever their gender or transgender) into account, in wholesale acceptance of the tenets of gender ideology. The guidelines, available here, are considered to be a “best practice” model by progressives.

The Catholic Church in Malta has also become quite open to LGBT issues.

According to a February 2017 article published by New Ways Ministry — the purportedly American Catholic pro-LGBT movement — “Malta’s Rapid Shift on LGBT Rights Is Case Study for Other Catholic Nations,” as the paper’s title read.

In it, gay activists explain: “We’re a Catholic country. But eventually the church has to come to terms [with society changing].” The battle lost by the Church when divorce became legal appears to have been crucial, if not definitive.

“It must be acknowledged,” said Fr. Rene Camilleri, that Catholics in Malta “are not taking a package deal.” Camilleri, who is Episcopal Vicar for Evangelization for the Archdiocese of Malta and a lecturer at the University of Malta, has previously described church teaching on homosexuality as “nonsensical.” He also said Catholic ministers “cannot deprive [same-gender couples] of the blessing for which they ask.”

The same article speaks of the “positive outreach of the country’s bishops to LGBT communities” and recalls: “A priest who blessed a same-gender couple’s rings was not punished by the bishop; indeed, Archbishop Charles Scicluna affirmed the priest’s outreach efforts to LGBT people.” LifeSite commented on that event in 2015. While he asked the priest, Dominican father Mark Montebello, to follow Church practice and discipline in his ministry, no sanctions were imposed, and that was the most remarkable “lesson” of the affair, New Ways Ministry wrote at the time.

No reactions have been forthcoming either since Amanda Cossai’s Facebook post in April at the end of the teaching experience in a Church school or the interview about it published on September 9 by The Malta Independent.