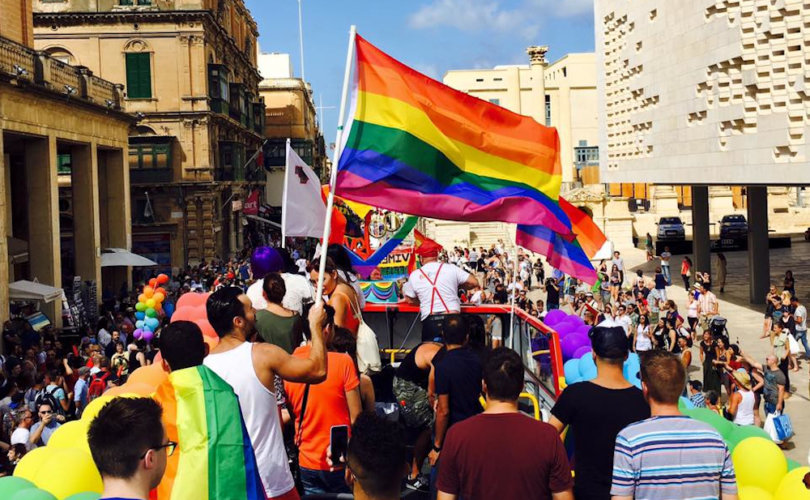 VALLETTA, Malta, December 8, 2016 (LifeSiteNews) — Legislators in the island nation of Malta have prescribed jail time for any counselor who seeks to help a client with same-sex desires overcome his or her unwanted attractions.

The Maltese Parliament unanimously passed the Affirmation of Sexual Orientation, Gender Identity, and Gender Expression Bill into law on Tuesday. The new law states that counseling an LGBTQ person away from their chosen sexual orientation is “deceptive and harmful.”

The penalty for therapists or anyone, apparently including counseling pastors, who “attempts to change, repress or eliminate a person’s sexual orientation” is up to €5,000 ($5,400) or five months in jail.

With this new law, Malta becomes the first nation in Europe to ban reparative therapy. Ironically, the law does not defend the rights of same-sex attracted clients who want help out of the gay lifestyle.

California MassResistance Director Arthur Christopher Schaper told LifeSiteNews that the new Malta law violates the rights of same-sex attracted people. “The truth is, individuals have every right to deal with SSA, and no state should prevent that,” he said.

“Individuals who struggle with same-sex attraction are people who have been harmed or neglected during their upbringing, who are trying to deal with unmet emotional and psychological needs,” Schaper explained. “In more severe cases, patients are struggling to overcome the emotional scars which results from sexual abuse.”

“Reparative therapy for same-sex attraction is neither immoral nor dangerous to patients,” Schaper said. “Banning reparative therapy actually makes it more difficult for people to deal with trauma from their youth.”

The Maltese Parliament also passed amendments that lower the age to change gender legally to 16.

The move to support LGBTQ activism in the country has been swift. Malta has a long Christian legacy, claiming to be an Apostolic See, as the Apostle Paul himself was shipwrecked on Malta. Roman Catholicism is the official religion in Malta, and as recently as 2011, Malta still banned divorce.

Since that time, however, Malta has moved to the forefront of LGBTQ rights. Ranked by gays as one of the best countries in terms of supporting homosexuality, the Gay Star News praises the small island nation for having “one of the most comprehensive laws protecting trans and intersex people in the world.”

“The Malta lawmakers are looking at the past that has been long gone, and sadly the passed a bad law,” Walt Heyer, a former transgender, told LifeSiteNews. “When the client is willing, psychotherapy has proven to be effective. I know firsthand because psychotherapy ‘repaired’ my eight-year-long transgender life.”

“Psychotherapy when effectively applied by a skilled knowledgeable therapist can uncover deep Axis 1 comorbid disorders” which contribute to gender confusion, Heyer explained. “Therapy has proven to be effective and is used for a wide variety of sexual issues as an effective treatment.”

Heyer has written a book, Paper Genders: Pulling the Mask Off the Transgender Phenomenon dealing with the subject of positive therapy helping heal homosexuality.

Heyer concedes that in the distant past, some practices seeking to help homosexuals were actually harmful. “The reparative therapy of the past was proven to be as harmful and ineffective as the frontal lobotomy was for many years,” he illustrated.

“Today, the same cognitive therapy traditionally used by psychotherapists for every other psychological issue is used for unwanted same-sex attraction,” Heyer testified in a publication earlier this year. “In fact, it was through traditional therapy that I was able to walk out of my transgender life.”