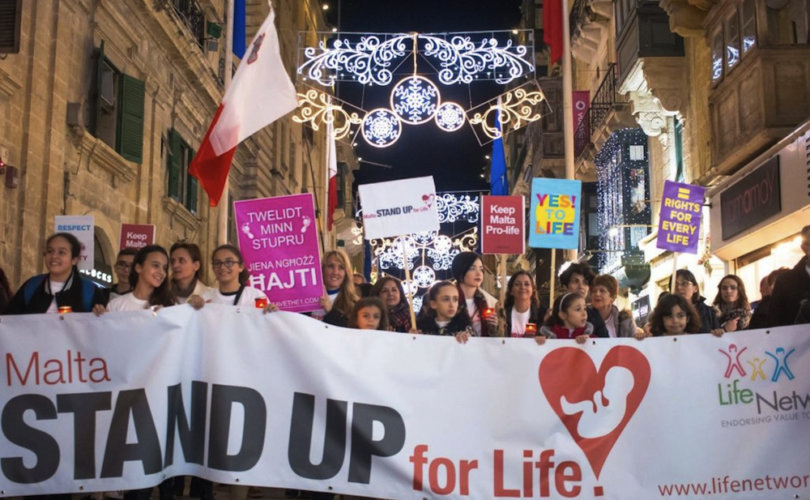 MALTA, January 20, 2017 (LifeSiteNews) — Malta’s Medical Authority is breaking the country’s laws against abortion by allowing the “morning-after pill” to be sold over the counter, according to a judicial protest lodged by two pro-life doctors.

Drs. Miriam Sciberras and Klaus Vella Bardon of the Life Network Foundation filed the judicial protest, which must be done under Maltese law 15 days before seeking a court order or some other judicial sanction against the government.

They argue that emergency contraceptive EllaOne, which has been available for several weeks over the counter in the island republic’s pharmacies, works by terminating pregnancies and not by preventing them.

The complaint states, “Under the Malta law, any intervention to stop the process after fertilization occurred amount[s] to induced miscarriage [or] abortion.”

Dr. Sciberras explained to LifeSiteNews, “The laws in Malta are very particular. They cannot be compared to the laws in other countries. There they have abortion. Here life is still protected from conception. So having it made available is a blow.”

But after a pro-abortion women’s group filed its own judicial protest last year, claiming the ban on so-called emergency contraception violated their rights, a parliamentary conjoint committee, which included members of the Medical Authority, considered the issue.

Dr. Sciberras reports that the Medical Authority argued throughout the committee hearings that EllaOne (ulipristal acetate) was not an abortifacient because it prevented pregnancy from happening in the first place. This idea, she told LifeSiteNews, can be traced to the redefinition in 1965 of pregnancy and conception as “the implantation of a fertilized ovum” by the American College of Obstetricians and Gynecologists.

But implantation occurs two weeks after fertilization of the egg by the sperm, Dr. Sciberras says, whereas Maltese law protects the unborn child from fertilization.

What’s more, she said, the conjoint committee instructed the Medical Authority to obey the Criminal Code and the Embryo Protection Act and only to “issue the license of these medicines if they are not abortifacient” – using the committee’s own words.

Until the Life Network Foundation’s judicial protest, public debate had focused on the Medical Authority’s decision that no prescription be required for emergency contraceptives. Now Dr. Sciberras hopes the protest will shake up the government and draw attention to the more critical issue of when life really begins.

Her group has brought a noted Italian expert on obstetrics and gynecology, Dr. Bruno Mozzanega of the University of Padua, to Malta to speak on the subject.

“It is the first thing you do [is] to raise awareness, to raise attention to the authorities,” she told LifeSiteNews. “We are telling them: ‘Look, we think this has been done in breach of the law.’ So now we wait and see what happens.”