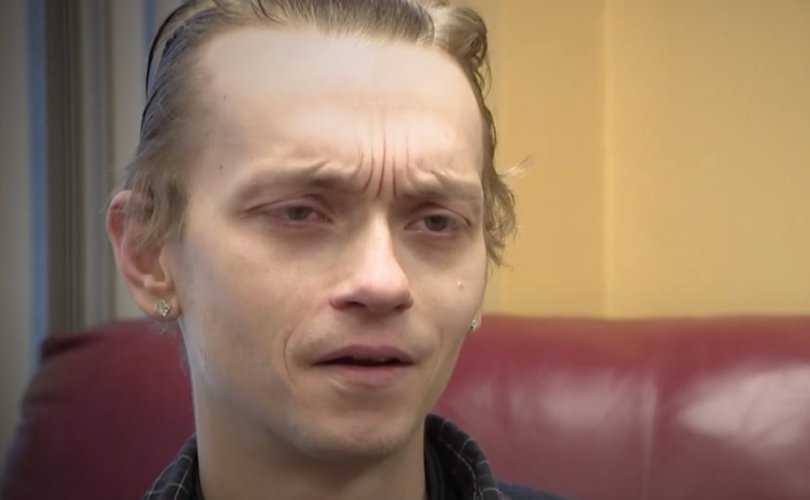 BUFFALO, New York, February 8, 2019 (LifeSiteNews) – A man who says his uncle, a longtime priest in the Diocese of Buffalo, sexually assaulted him when he was just nine years old has gone public with his story, displaying for the world the anguish and turmoil the incident has inflicted upon him for more than two decades.

Ryan Cooley, now age 33, made it clear in a televised interview that he never wants to see his uncle again, and that from his perspective, the Church harbors within the priesthood a “pedophile mafia.”

Cooley recounted for WGRZ that one day when he was a boy, he was surprised to encounter his uncle, Fr. Arthur Smith, in his cousin’s bedroom.

“I saw Artie, and I was like, ‘what are you doing here?’” said Cooley.

“I wanted to crawl under the bed,” continued a clearly distraught Cooley, holding his head in his hand and fighting back tears.

“He sat me down on the bed,” said Cooley, “and fed me some bull***t like, ‘Oh, you’re growing up so fast,’” as his uncle started rubbing his back.

“He just stuck his hand up my shorts and just kept touching me,” added Cooley, short of breath and breaking into sobs.

“He knew that I didn’t want that,” declared Cooley.

Cooley kept the abuse he suffered at the hands of his uncle to himself for two decades before finally sharing his secret with another member of his family two years ago.

His uncle “needs something worse than prison,” asserted Cooley.  He’s “a creeper,” who has “no moral compass at all. I honestly believed that he preyed on that fact that I didn’t have a father in my life.”

Cooley said he doesn’t want an apology from his uncle, adding, “I don’t ever want to see him again.”

Siobhan O'Connor, Buffalo Bishop Richard Malone’s former assistant who famously tore back the curtain of diocesan deceit protecting its predator priests last fall, responded to Ryan Cooley’s testimony by saying, “The Fr. Art Smith case always bothered me to my core even when I didn’t know the half of it.”

“I could never have imagined all I would discover in his file in the Secret Archives,” she wrote in a Facebook posting. “And I certainly never imagined Ryan.”

“Please pray for Ryan and for all of Fr. Art’s victims. And for Fr. Art himself. In many respects, he needs them the most,” she added.

Allegations of sexual misconduct by Fr. Art Smith involving young men and boys date back about 15 years, and his handling by Buffalo’s bishops has proven to be inconsistent, if not problematic.

After a parent discovered in 2011 that the priest had sent inappropriate messages to her son via Facebook, St. Mary of the Lake School principal Kristine Hider wrote to Bishop Malone, seeking to have Fr. Smith banned from her school.

“This man is a predator, and a groomer of young children,” she wrote. “Something needs to be done.”

“As school principal I feel the students in grade 8 have been injured and troubled by the actions of this man more than originally thought.”

Fr. Smith was suspended from duty and sent to the Saint John Vianney Center in Philadelphia for rehabilitation, according to a report by WKBW TV, Buffalo.

Ryan’s mother shared with WGRZ a letter Fr. Smith – her brother – sent to the family in 2013 explaining the bishop wanted him to seek “counseling.” In it, he mentioned struggling with his “sexual orientation” and said that the message he’d sent to a minor ended with “luv u,” which is what he said got him into trouble.

A year later, after hearing that Fr. Art Smith had been reinstated, Hider wrote, “If a teacher would have been grooming children and had inappropriate relations with a minor, they would have been fired and lost their license to teach.”

“Yet a priest that has a history of inappropriate contact with the youth was among the youth ministering the sacrament of Reconciliation,” she added.

Bishop Malone told Principal Hider that while allegations about Fr. Smith “did not constitute a violation of the Charter for the Protection of Children and Young People or the policy of our Diocese,” he assured her that Smith had been given a “lower profile position” as Chaplain at the Brothers of Mercy residence, a nursing home for the elderly.

The bishop’s judgment was proven wrong when two young men, ages 19 and 25, reported “inappropriate remarks and touching,” by Fr. Smith. One incident involved a seminarian accosted by Smith in the sacristy after Mass.

The Brothers of Mercy were quick to respond.

“Due to the unfortunate circumstances involving Fr. Arthur Smith and in particular his inappropriate conduct with employees, we no longer consider him a member of our Spiritual care Department. Regrettably, Father Smith’s actions have become a matter of gossip in our facilities,” wrote Brother Jude Holzfoerster, Regional Superior. “I regret we must terminate Fr. Smith’s work on our Campus.”

Despite the growing dossier of allegations of sexual misconduct, in May 2015, Bishop Malone again reinstated Smith as a “Sacramental Minister,” and later thanked him in writing for his service to the diocese assisting priests in local parishes.

Because Fr. Smith had reached out to Vatican officials asserting that he was a victim of false accusations, Bishop Malone was forced to respond in writing to an inquiry from the Holy See.

Malone’s correspondence with the Vatican revealed two incidents involving Fr. Smith that had never been made public, including one with a seminarian who said that in 2004 the priest entered his room, joined him in his bed, and touched his genitalia.

Despite the overwhelming number of allegations, in 2015 Bishop Malone inexplicably wrote a letter of recommendation on behalf of Fr. Smith to the Apostleship of the Sea Cruise Ship Priest Program, declaring Smith to be “a person of good moral character and reputation.”

“I know nothing which would in any way limit or disqualify him from this ministry,” continued Malone. “I am unaware of anything in his background which would render him unsuitable to work with minor children.”