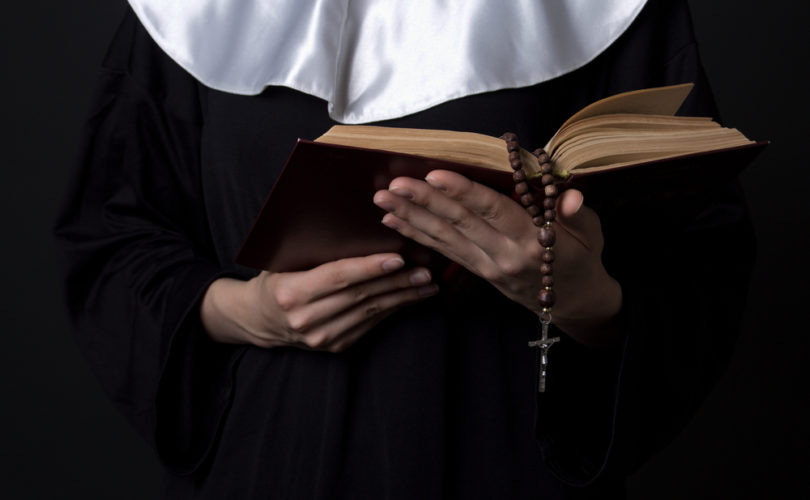 NIJLEN, Belgium, April 9, 2021 (LifeSiteNews) — A 46-year-old Catholic man in Belgium who identifies as female is pushing to gain entrance to a convent as a nun where he hopes to live the remainder of his life as a religious sister.

“Eefje” Spreuters told Radio 2 Antwerp, as reported by VRT.be, that “everywhere I register, the sisters are enthusiastic. But it is not allowed by the rules,” he says, for a man who believes himself to be female to enter the convent.

Despite this, the man, who has been dressing as a woman for over a year, has already begun identifying himself as a religious sister.

“I have always felt like a woman and I was raised very religiously, especially by my mother. All my life I want to go to the monastery. As a man I have had a tough life, now I want peace,” he added.

Spreuters said that if Pope Francis will not grant his request, he is prepared to start an order for men who identify as women and want to identify as religious sisters.

“I asked the nuns of the Order of the Poor Clares. Last week I had contact with the nuns in Brecht, the Trappistines. They could not answer me [about joining] because they did not know whether I could enter as a trans woman. I said I would start a monastic order myself, to which the nuns responded with interest and enthusiasm. If necessary, I will go to the Pope in the Vatican. My calling is stronger than ever.”

Allowing men who identify as women to enter female-only spaces has not gone over well in other sectors of society. Male criminals who have claimed to be women in order to be put into female prisons have gone on to sexually assault and rape female inmates.

Church lawyer Rik Torfs told Radio 2 Antwerp that men who identify as female cannot enter a convent. The Church “maintains the anthropological view that the biological sex you were born with is unchanging,” he said. “For the Catholic Church, Eefje remains a man and is not welcome in a women’s monastery.”

The Catholic Church teaches that the male and female sexes, man and woman, are biological realities willed and created by God. The 2019 Declaration of Truths put out by several prominent Catholic bishops along with a cardinal states that it is a “rebellion against natural and Divine law and a grave sin that a man may attempt to become a woman by mutilating himself, or even by simply declaring himself to be such, or that a woman may in like manner attempt to become a man, or to hold that the civil authority has the duty or the right to act as if such things were or may be possible and legitimate.”

Belgian Bishop Johan Bonny told local media that he will refrain from commenting on Spreuters’ request until after the bishop has had a chance to speak with the man. Bishop Bonny recently made international news over his verbal attack last month on the Vatican for its rejection of blessings for same-sex couples.

If Spreuters ever makes his plea known to Pope Francis, it’s anyone’s guess how the Pope might respond. Last year, the Pope praised a nun for opening a “trans home” for men who claim to be women, even calling the men “girls.” In 2016, Pope Francis referred to a woman as a “man” who had undergone a sex-change operation. He also referred to her as having “married” another woman and admitted to receiving them in the Vatican. “He got married,” said the Pope, referring to the woman who now identifies as male. “He that was ‘her’ but is he,” explained the Pope.

Reaction on social media to news of a man wanting to enter the convent as a nun was varied.

“As an atheist I will defend the nuns to keep their female only convents,” wrote one person.

“What’s left out there that’s only for females/women & girls? Is there anything left only for us,” wrote one woman.

There was even humor.

“He should have declared himself nun-binary,” wrote one.