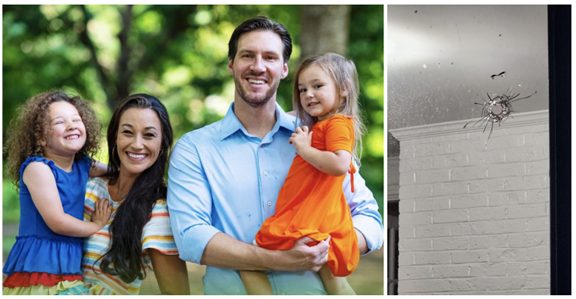 Republican Pat Harrigan and family; Bullet hole in window beneath room where his children were asleep Facebook; Harrigan Campaign

The incident occurred at the GOP nominee’s parent’s home in Hickory on October 18, but has only recently come to light. No one was injured. So far, no arrests have been made and an FBI investigation remains ongoing.

Harrigan campaign manager Brandon Craft told The Carolina Journal that the shot entered the home only a few feet from where Harrigan’s daughters, ages 3 and 5, were sleeping.

“It’s just disconcerting, especially with the children there,” the candidate’s mother, Marla Harrigan, told the Associated Press. “This campaign is so stressful, and we feel so badly for our son because, you know, he’s terribly stressed about his children … and now they’re gone, they’re not with their parents and it’s just very, very disruptive.”

Harrigan, a U.S. Army Special Forces veteran who currently runs a firearms manufacturing business, has since been forced to wear bulletproof vests to campaign events.

After the shooting, Harrigan’s opponent, Democrat state Sen. Jeff Jackson, pulled a TV ad that Harrigan said “went too far” because it targeted his family’s residence.

In an open letter addressed to Jackson, Harrigan wrote:

Family is stretched thin on campaigns – and you violated my family’s security. I have already received a credible death threat. I wear a low-profile bulletproof vest to every single major public event. As I travel, wherever my family is located, they are significantly less safe with me in this race. And they are even less safe now that you’ve shown one of my homes to the world.

There are many questions that I have about you, your taxes, former home, current home, and your personal life. But I’m never going to film an ad in front of your home, violating the sanctity and security of your family- putting their lives at risk. It just doesn’t seem like the ‘honest and decent’ thing to do. Quite frankly, it would be so dishonest and indecent that the thought has never crossed my mind.

“My mission is a better economy, less inflation & safe streets,” Harrigan said. “A bullet & death threats aren’t enough to knock this Green Beret off that mission.”

Reporting of the incident follows news of last week’s horrific attack on Paul Pelosi, husband of Speaker of the U.S. House of Representatives Nancy Pelosi. An intruder broke into the Pelosi’s’ San Francisco mansion in the middle of the night and assaulted the 82-year-old with a hammer, knocking him unconscious.