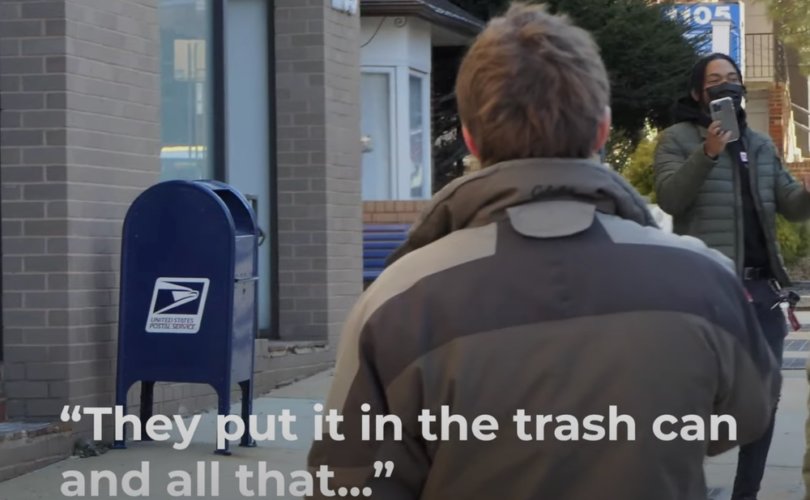 “They put it in the trashcan and all that,” the masked man said. He later returned to the facility and left with the woman he’d dropped off earlier in the day. LifeSiteNews has blurred her face in our video of the encounter.

Pro-life activists were gathered at Silver Spring Gynecology and Family Planning Saturday for a Red Rose Rescue. One Catholic priest, Father Fidelis Moscinski, CFR, was arrested along with Lauren Handy and Jonathan Darnell for entering the facility, offering roses to the mothers inside, and refusing to leave. This was the first Red Rose Rescue during the Biden regime.

The Red Rose Rescue movement is inspired by Canadian pro-life activist Mary Wagner. It is something of a revival of the rescue movement of the early days of the pro-life movement, before the Federal Access to Clinic Entrances Act (FACE) imposed harsh penalties on pro-lifers who save babies by physically blocking “access” to abortion facilities.

There have now been close to 20 Red Rose Rescues in the U.S. since 2017. Legally, they have resulted in charges being dropped a number of times, notably in federal court; others have ended in trespassing convictions. The state of Michigan has treated rescuers the most harshly, jailing pro-lifers and even charging four with a felony for obstruction of officers. Michigan’s attorney general is a lesbian in a same-sex “marriage.”

No one has been charged under FACE, though. Rescuers have ranged in age from 21 to 65.

Eight women were inside the Silver Spring abortion center. Five left the facility and four accepted the pro-lifers’ roses as well as information about abortion pill reversal.