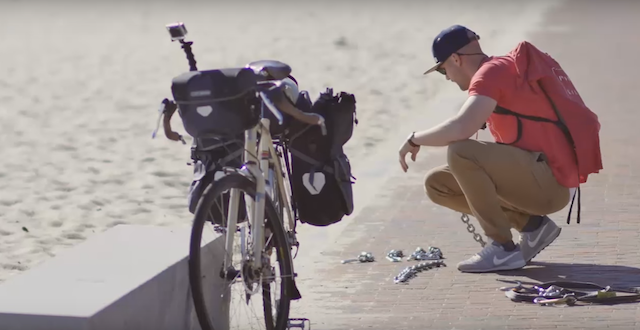 December 6, 2016 (LifeSiteNews) – Garrett Jonsson ran 30 marathons in 30 days, handcuffed during each one of them, and then biked 3,800 miles across the United States dragging chains behind him–all to raise awareness about the harms of pornography addiction.

In a video producted by Fight the New Drug, 29-year-old Jonsson explained that his first exposure to pornography was at age nine. Pornography became a regular habit for him throughout adolesence.

“I would watch it a few times a week,” said Jonsson. “It was always something that I almost talked myself into, that it wasn't that bad.”

Jonsson married Ariel when he was 24. Pornography remained a struggle for him, despite his initial belief that he wouldn't use pornography once he was married.

“For the first time in my life, I knew that it was an actual drug,” said Jonsson. “It was a challenge for other people. It wasn't just me.”

Jonsson's upcoming 30th birthday is a milestone in his fight against pornography and wanting to move “forward” from it.

“I did 30 marathons in 30 days while wearing handcuffs,” he explained. “Handcuffs for me represented the addictive nature of pornography.”

Once he was done with the “30 in 30,” Jonsson said, “At that point it's like, I wanna do something to help other people.”

The chains he dragged behind his bike represented the “heaviness of addiction and recovery.” The chains were so heavy that they made it impossible for Jonsson to coast, even if he was going downhill.

But, as Jonsson biked, the chains began to wear down.

“Little by little those chains started falling off, and so that represented the journey of addiction and recovery,” he said. “I ended without any chains.”