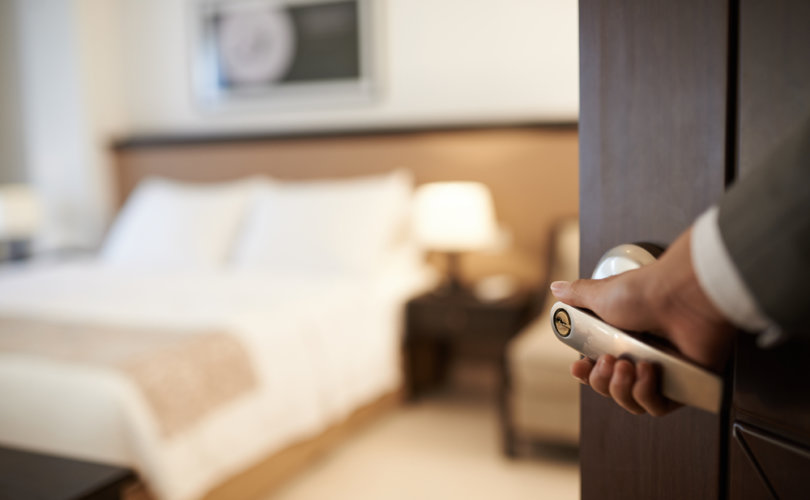 MONTREAL, Quebec, February 26, 2021 (LifeSiteNews) – A woman described the horror she experienced while doing time at a Canadian COVID quarantine facility when a fellow quarantined traveler barged into her room and began to sexually assault her.

“He ran into my room, made himself at home, sat all the way in the back on my couch,” said the woman, according to a CTV report about the incident.

“I said, ‘You need to get out of my room,’ and ‘I don't want to have anything to do with you,’ and he said, ‘Aw come on, I haven't had sexual intercourse in a really long time.’”

According to a La Presse report, the victim said she had encountered in the hallway her alleged attacker, who unsuccessfully tried to ask her to his room. She then claims that the male attacker made his way into her room, without permission.

The woman’s testimony shines a spotlight on Canada’s mandatory COVID quarantine hotels, a measure imposed by Prime Minister Justin Trudeau allegedly to keep Canadian’s safe from COVID-19. Beginning February 21, all incoming travelers by air into Canada are required to stay at a minimum of three nights at a government-run quarantine facility at their own expense.

According to the CTV report about the incident, the sexual assault occurred on February 17. This was a day after the Laval, Quebec woman was forced to stay at the Sheraton Montreal Airport hotel upon returning from the United States. Border officials told her that the COVID-19 test she’d taken abroad was the wrong kind.

The woman said that the man grabbed her by her waist. She said she told her assaulter that it was his “last chance” before she was going to “scream” for help.

The man was half undressed and had “his pants to his knees” with his “hands” on his “genitals,” according to the CTV report.

It was not until she threatened to scream for help a second time that the attacker left her room. She then called hotel security, which she says did not arrive until “15 to 20 minutes” after her call.

“And when they did [arrive] they handed me a bottle of water I had asked for four hours ago and told me ‘Just wait here, lock your door, and we'll be back,’” said the woman as reported by CTV.

She was taken to a local hospital and gave a statement to the police and was then allowed to return to her home.

CTV reported that the Quebec Crown prosecutors’ office confirmed to them that 29-year-old Robert Shakory from Ontario has been charged with sexual assault, break and enter and harassment, and is to appear in court on May 3.

In early January, the Canadian federal government enacted new rules which required all air travelers coming into Canada to present a negative PCR or LAMP COVID-19 test to their airline before being allowed to board their flight.

As of February 22, before arrival in Canada, passengers must reserve online and pay for a spot at a government-approved hotel.

If a negative test result comes in during the three-day forced stay, a person is then allowed to quarantine at home for 14 days. Only four airports in Canada, Vancouver, Calgary, Toronto, and Montreal, currently service international flights.

The Justice Centre for Constitutional Freedoms (JCCF) condemned the new rules, saying that the rules will “forcibly confine” people to a hotel stay upon arrival in Canada.

In mid-February, the JCCF said it will sue the Canadian government.

“Quarantine, particularly of healthy or asymptomatic individuals, is the functional equivalent of house arrest and the Justice Centre will not allow it to continue unchallenged,” stated JCCF President John Carpay in a news release.

Although the new travel rules officially came into effect on February 22, the forced quarantine in Calgary a few weeks ago of Nikki Mathis, who returned to Canada from the U.S., highlights how travelers have been forced into quarantine hotels before this date.

Mathis’ ordeal made headlines globally for its apparent violation of her constitutional rights. She had a negative COVID test, which is needed to enter Canada, but was forced into a hotel quarantine site without being told the location of the facility, because her COVID test was not the correct kind demanded by Canadian authorities.

News of the new restrictions prompted a backlash which forced Trudeau’s government to delay full implementation of the new rules, however, until this week.

Mathis retained the JCCF to help her protest her three-day confinement in a Calgary quarantine hotel.

The alleged sexual assault at the quarantine hotel sparked an immediate backlash from some MPs in the official opposition Conservative Party of Canada (CPC.)

On Wednesday in response to the report of the alleged sexual assault of the Quebec woman, as well as that of another woman at home at the hands of a quarantine security officer, four CPC MPs said that the Trudeau Liberal government should immediately “suspend” its mandatory hotel quarantine.

“We are deeply angered to hear reports of sexual violence are happening during federally mandated quarantines by those supposed to be protecting public health. The federal government has a duty to protect everyone in their quarantine facilities and those who are trying to follow federal regulations while at home,” reads a statement from CPC MPs, Michelle Rempel Garner, Shannon Stubbs, Jag Sahota and Richard Martel.

“The Liberal government must take action now. We call for the Liberals to suspend the hotel quarantine requirement until they have put measures in place to ensure the safety of Canadians and institute a system for verifying at-home quarantine that doesn’t involve security agents who have not been properly vetted.”

The incident regarding the alleged assault from a quarantine security officer happened on February 18.  according to reports. A 27-year-old man from Hamilton, who works as a Quarantine Security guard, allegedly tried to extort a woman of money at her Oakville, Ontario, home, with a claim she was breaking COVID quarantine rules. The man then allegedly sexually assaulted the woman after she refused to pay, said Halton regional police. He has been charged with sexual assault and extortion.

According to the Public Health Agency, there are four private security companies under contract by the Canadian government: Garda Canada Security Corporation, the Canadian Corps of Commissionaires, G4S Secure Solutions (Canada) Ltd., and Paladin Risk Solutions.