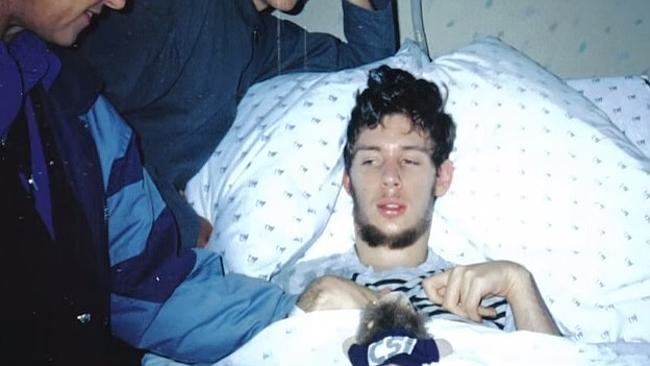 'The stark reality hit me that I was going to spend the rest of my life like that – totally alone,' recalls Martin Pistorius.

Martin Pistorius hates Barney. And it's no wonder why. For 12 years, while he was in a coma that doctors described as a “vegetative state,” nurses, thinking that he couldn't see or hear anything, played endless re-runs of Barney as he sat, strapped into his wheel chair.

But Martin wasn't the “vegetable” that doctors said he was. In fact, he could see and hear everything.

“I cannot even express to you how much I hated Barney,” he recently told NPR.

In the 1980s, Martin was a typical active youngster growing up in South Africa. But, then, at age 12, he came down with an illness that baffled doctors, and that eventually resulted in him losing his ability to move his limbs, then to make eye contact, and finally to speak.

His parents, Rodney and Joan Pistorius, were told that he was a “vegetable” and the best thing for them to do was take him home and keep him comfortable until he died.

But the youngster continued to live despite the diagnosis.

Now, in a new memoir, “Ghost Boy: My Escape From A Life Locked Inside My Own Body,” Martin has revealed that, although he was initially unconscious as doctors thought, after about two years he started waking up, eventually becoming fully conscious of everything around him.

Martin’s dad, Rodney, cared for his son throughout the ordeal, and recalls the daily routine of rising at five in the morning to get Martin ready for a day at a special care center.

“Eight hours later, I’d pick him up, bathe him, feed him, put him in bed, set my alarm for two hours so that I’d wake up to turn him so that he didn’t get bedsores,” Rodney said in an NPR report.

Martin remembers, however, that his mom at one point lost hope, and while gazing at her son and thinking he could not hear her, said “I hope you die.”

But he did hear her.

“Yes, I was there, not from the very beginning, but about two years into my vegetative state, I began to wake up,” Martin said.

“I was aware of everything, just like any normal person. Everyone was so used to me not being there that they didn’t notice when I began to be present again. The stark reality hit me that I was going to spend the rest of my life like that – totally alone.”

With his brain active but his body unresponsive, Martin at first thought he was trapped and would remain so.

“You don't really think about anything,” Martin recalled. “You simply exist. It's a very dark place to find yourself because, in a sense, you are allowing yourself to vanish. My mind was trapped inside a useless body, my arms and legs weren’t mine to control and my voice was mute. I couldn’t make a sign or sounds to let anyone know I’d become aware again. I was invisible – the ghost boy.”

But again, Martin didn't give up, and says he eventually came to terms with his mother's words.

“The rest of the world felt so far away when she said those words,” he recalled, but then realized that “as time passed, I gradually learned to understand my mother's desperation. Every time she looked at me, she could see only a cruel parody of the once-healthy child she had loved so much. “

Eventually Martin's body began to catch up to his mind and inexplicably began to heal. He learned to communicate using a computer and began to expand his world beyond the confines that had encumbered him.

He is now 39, is married to Joanna, and lives a fully functional and normal life in Harlow, England.

Martin's story isn't as unusual as it might sound. In recent years there have been numerous stories that have emerged of people being declared “brain dead” or in a “vegetative state” who have subsequently recovered and revealed that they were fully aware of what was going on around them.

In one particularly chilling case, a young man, Zach Dunlap, revealed that he was fully conscious as doctors and his family members discussed how they would donate his organs. Only moments before he was scheduled to be wheeled into the operating room to have his organs removed, a family member dug a fingernail under his toenail, causing a sudden reaction. The surgery was called off, and Zach recovered.

Cases like these are fueling a growing debate about the accuracy of “vegetative state” and “brain death” diagnoses.