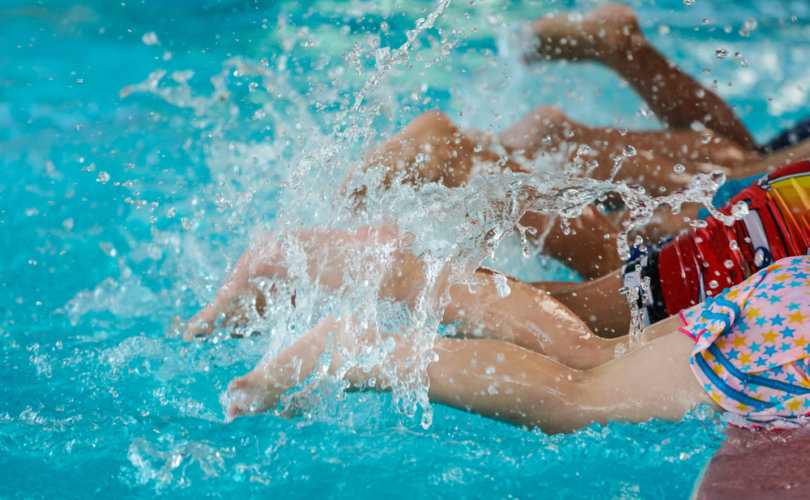 WARNING: This report contains content that is not suitable for children

VANCOUVER, July 22, 2019 (LifeSiteNews) — Canadian transgender activist Jonathan “Jessica” Yaniv, a biologically born male who now claims to be “female,” will be at the Township of Langley council tonight asking for permission to host “topless” LGBT swim parties for “people aged 12+” at the municipality’s public swimming pools. He is also requesting that parents be “prohibited” from attending the events where 12-year-old girls could be present.

Yaniv states in a delegation request to appear before the Township Council that he seeks “permission for LGBTQ2s+ organizations to be allowed to host an ‘All-Bodies Swim’ at TOL civic pools (WG Rec, WC Clair, Otter) for all people aged 12+ where these events will be restricted to LGBTQ2S and individuals will be permitted to be topless (at their leisure), in compliance with the laws of Canada and where parents and caretakers will be prohibited from attending these events as it’s considered safe and inclusive.”

While the B.C. Supreme Court agreed in 2000 that women can show their breasts in public, siding with a woman who challenged a bylaw against toplessness at a public pool, a vast majority of women, however, choose to cover themselves.

The trans activist, who calls himself a “proud lesbian,” is behind discrimination complaints launched against 16 beauticians for refusing to wax his male genitals, as can now be revealed after the BC Human Rights tribunal lifted an interim publication ban last week during Yaniv’s latest hearing Wednesday. Yaniv represented himself at the hearing.

But there’s much more to Yaniv’s story than his waxing crusade, including a fixation in wanting to encounter menstruating girls in public bathrooms.

Screenshots of Yaniv’s social media posts showing a disturbing interest in the menstruation of 10 and 12-year-old girls have been circulating online for more than a year. He has long been the subject of online allegations that he uses his self-declared “female” status to gain access to women-only spaces and contact young girls where he asks them leading questions.

Indeed, so persistent have the allegations been that Yaniv’s fellow trans activist Ronan “Morgane” Oger — vice president of the B.C. New Democratic Party — alleged in an April 19 blog that Yaniv is guilty of “predatory” and “inappropriate” online behavior.

“The things people have told me Jessica Yaniv has done to them are awful and can’t be swept out of our consciousness,” wrote Oger.

Yaniv is also notorious for reporting his critics to social media sites like Twitter and having them thrown off the site — another instance of which happened last week. He was behind well-known Canadian free speech advocate Lindsay Shepherd being banned from Twitter four days after their heated exchange July 14, reported in the National Post.

Yaniv, who runs the Vancouver-based tech consulting business Trusted Nerd — where he reviews sex toys such as the “Shegasm Intense 2 in 1 Clit Stimulator” — taunted Shepherd about her condition of a septate uterus, which increases the chance of pregnancy loss, the National Post reported.

“At least I have a uterus, you fat, ugly man,” tweeted Shepherd, who had a baby in April, and is engaged to the Post Millennial’s Cosmin Dzsurdzsa.

Shepherd, a Free Speech Fellow at the Justice Centre for Constitutional Freedom, later deleted her tweets because she knew Yaniv's history of reporting critics, but doesn’t regret them, she told the National Post.

“Because this is a trans individual they are untouchable … they are allowed to mock and taunt me about my biology, they can say whatever crude things they want,” said Shepherd, who had 76,000 followers on her NewWorldHominin Twitter account.

“But when it comes to me wanting to take a shot back at that person and wanting to stand up for myself — or for my womanhood so to speak — I am permanently kicked off.”

Moreover, Yaniv evidently had Canadian feminist blogger Meghan Murphy permanently banned from Twitter, as he told a Township of Langley council meeting in December. He lamented then that Vancouver police have not yet charged Murphy with hate crimes. Murphy, who was reportedly banned after referring to Yaniv as “him,” is suing Twitter in a California court under the state’s unfair competition law, CNet reported in February.

Yaniv also boasted in May — to @ElectronicCrikt (whose account is now suspended) and others — of his power to silence his critics, which now include Oger, who in March won his own $55,000 BCHRT discrimination claim against Christian activist Bill Whatcott. Yaniv tweeted: “I meant I have power. And lots of it. I know how to use my words, and really shut down the haters one, after, another. Just look at Oger, she chickened out cause she LOST the fight against me, and she admitted it too LOL.”

I meant I have power. And lots of it. I know how to use my words, and really shut down the haters one, after, another. Just look at Oger, she chickened out cause she LOST the fight against me, and she admitted it too LOL.

Allegations that Yaniv used his self-declared “female” status to contact young girls surfaced in October 2018 on Gender Trender blog, and is now archived on breakingnews.ca.

Gender Trender alleged that in May, June, and July of 2018, a number of teenage girls took to Twitter, Facebook, and Instagram to claim Yaniv “pretended to be transgender” in order to access private Facebook groups for adolescent girls “where he spewed his creepy sexual fetishes about young women, menstruation, toilet and locker room fantasies.”

Gender Trender published screenshots allegedly from Yaniv which are now easily accessed on the Internet.

“If there’s like 30 girls in the change room, how many would you say are out there changing with their vaginas and t*ts out?” Yaniv wonders in one message. “Do you ever see t*ts or p*ssy?” he asks in another.

“If she wants a tampon though, should i give her one and instruct her on how to use it?… like, would i go into the stall with her and help her? that sounds so weird,” he ponders in another message.

“[H]ave you ever seen a tampon string hanging out of another girls thing?” he asks in another post. “Is it weird to ask a 10 year old for a tampon?” he asks yet again.

Yaniv claimed in an audio recording his intentions were misrepresented, as captured in a video and tweeted by a cultural commentator who has not yet been banned from Twitter:

Audio recording of this person—who I haven't been banned yet for speaking of, even as others have been suspended for sharing my videos—defending his detailed questions about 10 year olds and tampons. pic.twitter.com/yphiLTdekr

Yaniv, however, told LifeSiteNews that the screenshots of his social media conversations are “fake.”

“Considering they’re all fake, any publication is defamation and will be acted on,” Yaniv told LifeSiteNews in an email.

Oger wrote in April blog that he “tracked down and heard witnesses with first-person accounts of Jessica’s online behaviour spanning 2013 to 2018.”

Of four women he spoke to, three “had awful experiences with Jessica Yaniv. All were young women and girls at the time,” Oger said. “They are all adults now. I urged each woman to make a complaint with police on the basis of the things they said happened. I hope this has an effect and with enough police reports there may be a case.”

Oger said he finally commented on the allegations, despite advice not to, because Yaniv is still “actively campaigning about the topic of menstrual products and girls, the focus of years of her negative behaviour,” and “seems to be still engaging in programs that target young women.”

Earlier this year, Yaniv was a contestant in the Miss B.C. Pageant, but he has since dropped out.

When LifeSiteNews asked him at that time why he dropped out, he responded: “Why don’t you leave me alone? You’re harassing me now.”