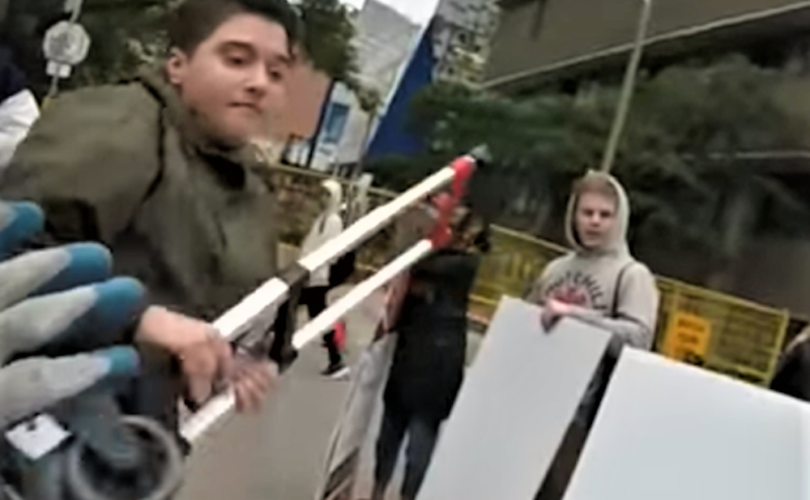 Photo of Jordan Hunt, who attacked pro-life advocate Marie-Claire Bissonnette on Sunday at a Life Chain in Toronto. Taken from NobleStudio101.com, the website of his former employer.

October 6, 2018 (LifeSiteNews) – Toronto police have arrested Jordan Hunt, 26, of Toronto, and charged him with assault following his roundhouse kicking a young woman Sunday.

Hunt, who turned himself in, is charged with eight counts of assault and seven counts of mischief. He appeared in court at Old City Hall Saturday morning for a bail hearing.

A Toronto hair stylist, Hunt was identified on the Internet some 24 hours after a video of his assault of Campaign Life youth coordinator Marie-Claire Bissonnette was posted online and went viral.

The 46-second clip shows Hunt roundhouse kicking Bissonnette after a brief exchange, sending her phone crashing to the ground. He then ripped the Campaign Life ribbon off Bissonnette’s jacket and ran away, she wrote in an account published in LifeSiteNews.

Sunday’s incident was not the first for Hunt.

He has since been identified as the man who knocked over a sign and argued with pro-life demonstrators last summer in a video filmed by Canadian Centre for Bioethical Reform (CCBR).

Bissonnette began filming Hunt during Sunday’s Life Chain after he scribbled on signs and people’s jackets with markers, she wrote.

Shortly after being kicked, Bissonnette experienced some discomfort in her shoulder, but she says she is now feeling fine, and is cooperating fully with police.

“I forgive him personally,” said the 27-year-old, who has urged people to pray for Hunt. “But I have filed a report with the police and they are investigating.”

As a result of being identified on the Internet, Hunt lost his contract at Noble Studio 101, which posted a statement on Wednesday that “We don’t condone his actions and he has been let go.”

“We’re four strong women here,” a studio representative told LifeSiteNews. “We don’t condone any kind of violence… He won’t be stepping his foot through the door again.”

Hunt has shut down his Instagram account and has not responded publicly about the incident, nor has he returned calls from media, including LifeSiteNews.

Hunt’s profile has been removed from the Noble Studio 101’s website, but according to a screenshot, he is writing a book on “The Hippy Swamp Witch, a guide to natural living,” and developing his own product line.

In the video, Hunt is wearing a pentagram, which is a Satanic symbol, around his neck.

The video of the attack has received close to two million views by Friday late afternoon. It was also trending Wednesday on Toronto Reddit, and has been posted on conservative and liberal sites, including Louder With Crowder, Newsweek, Daily Hive, LifeNews, BlogTO, Twitchy, and RedState, and noted on Facebook by conservative pundit Ben Shapiro. The story has also received attention on CTV, Global, Toronto Sun, as well as Fox News, and the UK’s Daily Mail.