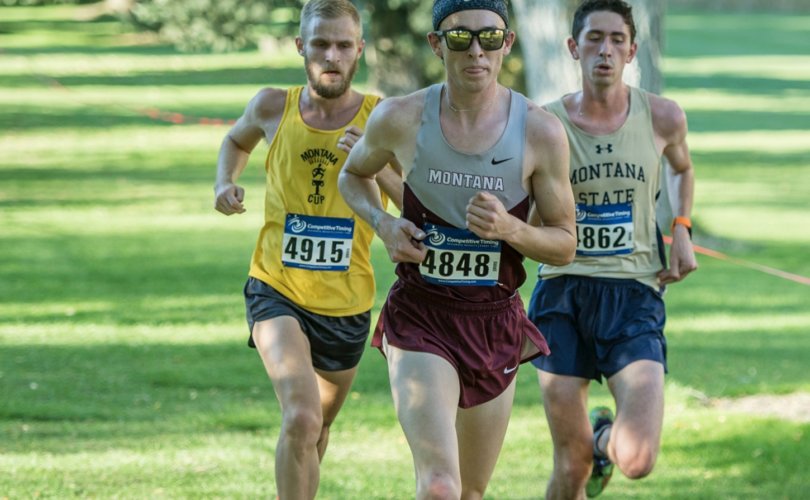 CHEYNEY, Washington, August 29, 2019 (LifeSiteNews) ― A male college athlete who says he’s female will run in a women’s cross-country race this weekend and based on his times while competing against men is likely to win, possibly in record-setting fashion.

Although Eastwood won only two of 56 races in three years on the Montana men’s track and cross country teams, his times are much faster than the women he’ll be running against on Saturday. His best 5,000-meter time in track and field is 14 minutes, 38.80 seconds, which is 32 seconds faster than the NCAA women’s track record of 15:01.70 set by former University of Colorado runner Jenny Simpson in 2009.

Eastwood’s personal best for that distance is just a shade slower than the world record of 3:50.07 for the women’s 1,500 set by Ethiopia's Genzebe Dedada in 2015.

Eastwood ran on boys’ and men’s track and cross-country teams until June 2018, when he began to take both estrogen and testosterone-suppressing hormones. According to NCAA policy, males who wish to compete in women’s sports as “transgender women” must suppress their testosterone levels for a full year before competing.

But there is not much they can do to counter the natural physical advantages bestowed upon adult men from having passed through male adolescence. During male adolescence, testosterone creates muscle bulk: adult male legs are about 80 percent muscle, whereas female legs are only 60 percent muscle. On average, adult men have larger lungs and hearts than women, too, and their hips are narrower, another advantage in running.

Fair Play for Women, a group that fights to protect the rights of females in the UK, puts this in simple terms:

“Males have a well-known physical performance advantage over females. Put simply, male bodies are bigger, faster and stronger on average than female bodies,” the group explained on its website.

“Female sport gives women the opportunity to showcase the very best of what the female body can do. In mixed competition, women would simply never win and our best sportswomen would be unheard of.”

A representative for Fair Play for Women tweeted her dismay that Eastwood’s personal best for the 800 meters is faster than that of a two-time British Olympic women’s champion, Dame Kelly Holmes.

“Meanwhile in the U.S., middle-distance runner Jonathan Eastwood will be running as 'June' in the women's races. Jonathan can run 800m faster than @damekellyholmes at her peak,” she wrote.

“Looks like we have another 'exceptional woman' about to hit the track. Sorry women, time to move over.”

A moderator for the Let’s Run conversation page responded to a remark about Eastwood by saying the NCCA’s policy on “transgendered participation” is inadequate.

“The reality is the NCAA's rules on transgender participation are sorely lacking,” he wrote.

“In June the NCAA confirmed in writing to us the following, ‘The NCAA does not have a maximum testosterone level for its current policy. The current policy is being reviewed by our membership.’”

The moderator also underscored that NCAA officials do not independently verify that the male athlete has been suppressing his natural levels of testosterone.

“There also is no independent verification of T suppression. So as long as one had a note from a medical professional saying they had undergone one year of testosterone suppression – even if they were in fact flushing the pills down the toilet – that person would be eligible to compete,” he wrote.

“But one could take one birth control pill every six months and technically be meeting the rules. It's a travesty.”

Eastwood is a “women’s, gender and sexuality studies” major.