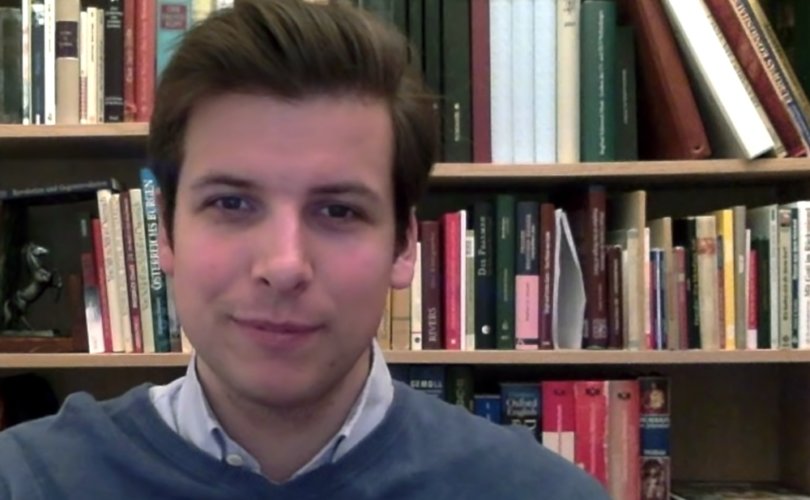 VIENNA, Austria, November 5, 2019 (LifeSiteNews) ― The man who threw the Pachamama statuettes into the Tiber during the Amazonian Synod last month is back with a new video to answer Catholics’ questions.

Alexander Tschugguel, 26, released a second video today in which he explained why he and a friend disposed of the statuettes in the Tiber, what his St. Boniface Institute is, and how Catholics can work for Christ.

First, however, he noted the importance of the event for Catholics worldwide.

Many people have contacted the young married convert to tell him that their bishops are attending pagan rites and instead of evangelizing have become political activists.

The first question Tschugguel addressed was whether throwing the Pachamama statuettes in the Tiber on Oct. 21 was the “right decision.” Some believe that merely removing the statuettes from the Church of St. Maria in Traspontina would have been enough.

Tschugguel argued, however, that it was necessary to throw the Pachamamas in the river to prevent them from being used again, put back into the church or even used in other Catholic liturgies.

“The idols were not used for the last Mass of the Amazonian Synod, so it was a great success,” he said.

The young Austrian mentioned also that if he and his colleague had simply taken the idols and hidden them, this would have justified accusations that the young men were thieves.

“So this was the best possibility to show people what it was all about without being too brutal or harming someone, but getting the complete goal.”

The second question was concerning the foundation of the St. Boniface Institute. Tschugguel explained that it was a response to many thousands of people who wanted to support his deed financially and with actions of their own. He wanted to make sure that Catholics’ actions, not he himself, were the object of the support.

“It always has to be about … our goals. Our goals are to keep the Catholic faith clean and pure, so that people can follow it again and come to Christ. The only goal we have is helping people go to heaven.”

The St. Boniface Institute was set up to better achieve this goal with viewers’ support, and Tschugguel and his colleagues are working on a homepage and a newsletter.

The final question dealt with self-promotion. Critics of their actions have suggested that the young men who threw the Pachamamas in the Tiber did so to win notoriety. Tschugguel denies the accusation.

“I think if we wanted to promote ourselves, we would have gone into the church in broad daylight and waited for them to catch us,” he said.

However, that was not their goal.

“We wanted the focus to stay on what we did,” he continued.

“That’s the reason we came [forward] two weeks later and not on the same day or the day afterward: to keep all the people discussing what exactly happens at the Synod and what happens with the Pachamama idols.”

Tschugguel and the St. Boniface Institute have now come forward to continue the conversation about problems still existing in the Church. The young man says a lot of work has to be done, and quoted St. Benedict of Nursia, who told his monks “Ora et labora” (Pray and work).

He has a message for people who are inspired by his battling for Catholic orthodoxy: don’t think of fellow Christians as your enemies and don’t spread hatred.

Tschugguel believes that “the most important thing” Catholics can do right now is to stay “really Catholic.”

“Know your faith,” he said.

He recommended that Catholics read many books that explain the faith, to plumb the depths of prayers, to understand Holy Mass, to go to Confession, and to pray the Rosary daily.

“It’s very, very important that we as Catholics use everything that God gave us,” Tschugguel said.

“You know a gift … is only a gift if we accept it. The gift exists, and now we have to accept it.”

He suggested joining the pro-life movement and joining in processions, among other activities, as ways of living the Catholic faith publicly. The young convert also suggested talking to family, friends, and colleagues about their faith to help them understand what God wants them to do.

Tschugguel called tradition the first “backbone of the Church” and said it shows us how we used to understand the Word of God. He also encouraged viewers to understand what their home cultures, their artistic and folk heritage, are about and find God’s plan behind them.

“God wants us to be different …  but united in one Church,’ he said.

“Every country has a different culture, and the cultures are good as long as they … obey the commandments of God,” he continued.

Tschugguel acknowledged LifeSiteNews and other media supporters yesterday, tweeting “Thank You for all Your prayers and support. @LifeSite @jhwesten @TaylorRMarshall @Church_Militant @KatholikenNet.”

Tschugguel told LifeSite co-founder John-Henry Westen in a video interview published yesterday that he was motivated to throw out the statuettes because he wanted to “bring pagan things out of a Catholic Church.”

“For me, it was really bad, because I saw in those statues and in those idols…a break of the First Commandment,” he said.