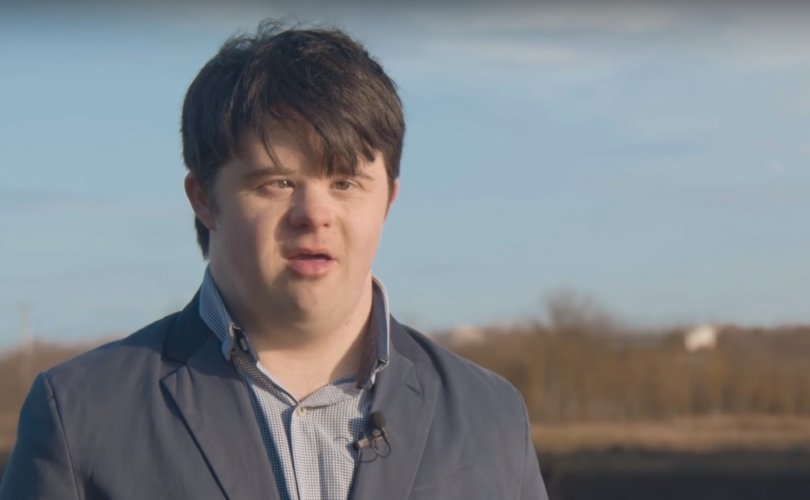 IRELAND, May 18, 2018 (LifeSiteNews) — The pro-life LoveBoth campaign has launched a new advertisement featuring a man with Down Syndrome, urging his fellow Irish citizens to vote to keep the 8th Amendment that protects babies like him from abortion.

“I love my life,” Conor O’Dowd, from the Irish town of Drogheda, declares in the video. “Please save babies with Down Syndrome. Do not repeal us. Protect the 8th.” The 8th Amendment, which affirms “the right to life of the unborn” deserving equal legal protection to the mother’s life, is the target of a May 25 national referendum on whether to repeal it.

“We are delighted to be joined by Conor and his family today at the launch of this video,” LoveBoth spokesperson Cora Sherlock said at the May 15 event revealing the ad. “Conor is just one of the people with Down Syndrome who have come forward in the last few weeks to speak out against the government’s abortion proposals.”

Repeal supporters have already prepared legislation legalizing abortion in the first trimester, subject to a 72-hour waiting period, to push through if they win. Later-term abortions would ostensibly be limited to risks to a mother’s life or health, or fatal fetal abnormalities, but pro-lifers warn that those exceptions are a pretense for much larger loopholes.

“Yesterday [Irish Health Minister] Simon Harris said that the government ‘specifically excluded disability’ as a grounds for abortion in the proposed legislation but this is not correct,” Sherlock continued. “The reality is that there is no such exclusion in the bill, specific or otherwise.”

She explained that the mental health exception for later abortions was broad enough that it could be used to justify aborting Down Syndrome babies, and more dangerously, that Down Syndrome can be diagnosed before the cutoff for elective abortions.

“Already three obstetricians, Dr Peter Boylan, Dr Rhona Mahony and Dr Fergal Malone all confirmed last week on the radio that abortions happen after Down Syndrome is detected by new medical tests and that it can be detected as early as 10 weeks with 99% accuracy,” Sherlock said.

A 2011 study found that 99 percent of people with Down Syndrome described themselves as “happy,” and only 4 percent of parents of Downs children expressed regret at having their child. Yet countries with abortion-on-demand disproportionately target Downs babies for death in the womb.

The ad notes that 90% of babies in Great Britain to receive a Down Syndrome diagnosis are aborted. It has also been estimated that 65 percent of Downs babies are aborted in Norway, virtually 100 percent in Iceland, and 95 percent in Spain. Precise data is not collected in the United States, but in 2015, the pro-life Charlotte Lozier Institute estimated that abortion reduces the American Down syndrome community by 30 percent.

Irish pro-lifers don’t want their country to become part of that trend.