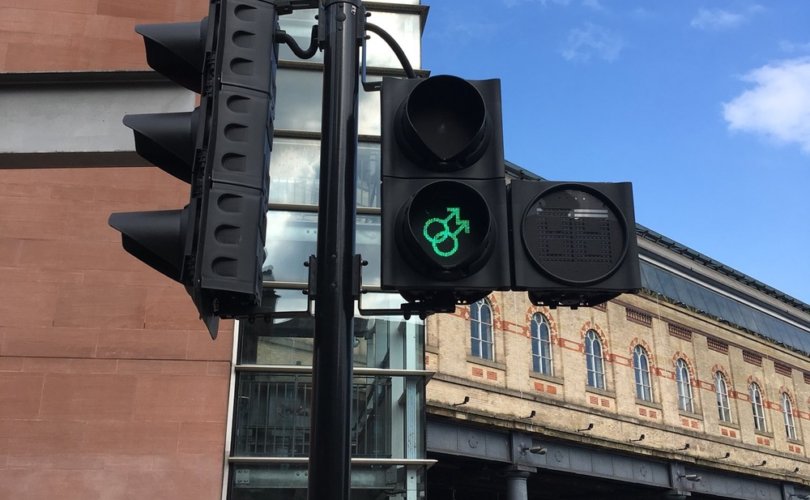 MANCHESTER, August 22, 2018 (LifeSiteNews) – Traffic lights are the newest way localities have found to express solidarity with the homosexual agenda…in Manchester, at least.

August 24-27 will see the annual Manchester Pride Festival, an event featuring an LGBT “pride” parade, a candlelight vigil for victims of HIV, a variety of musical performances, film premiers and art displays, dancing, karaoke, and more. The pro-LGBT PinkNews reports that in honor of the festivities, parts of the city have received custom pedestrian crossing lights that replace the lights’ traditional walking figures with pairs of gender symbols denoting homosexual relationships.

“These diversity images on traffic lights” help to “engage organisations to provide greater visibility” in a “fun and engaging way,” Manchester Pride chief executive Mark Fletcher claimed. The lights were inspired by similar lights made in 2016 for homosexual “pride” events in Bournemouth and London.

“Diversity and inclusivity is very important to Siemens, and this is a great example of a simple idea of supporting Pride and getting all people in Manchester to engage in a conversation about LGBT+ inclusion,” added Siemens UK CEO Juergen Maier. Siemens, a company involved in a diverse array of technology, manufacturing, energy, and financial enterprises, constructed the lights.

“Siemens has changed 34 of the traditional ‘green-man’ symbols to different diversity symbols, with these remaining in place for the duration of the bank holiday weekend,” the company explained. “The signals being changed are on the junctions of London Road & Fairfield St junction, Whitworth St & Sackville St and finally Princess St & Whitworth St.”

Same-sex “marriage” and adoption are legal in the United Kingdom. Left-wing advocates hope to expand the pro-LGBT status quo to ban treatment for unwanted same-sex attractions, enact more stringent reporting of “hate crimes” and online LGBT “abuse,” and more. John Bercow, the Speaker of the UK’s House of Commons, declared in July that respect for LGBT rights “has to trump” religious liberty.