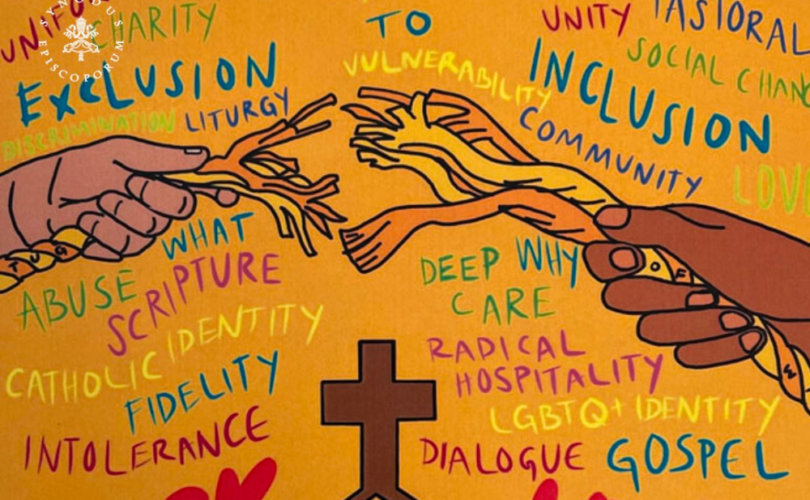 One of the Synod's images promoting 'LGBTQ+ identity'Screenshot/Facebook

VATICAN CITY (LifeSiteNews) – Catholics are hitting back at the Vatican after images shared on the Synod on Synodality’s social media accounts appeared to promote female priests and LGBT ideology.

On September 24, the social media accounts for the Vatican’s Synod on Synodality uploaded a series of pictures which it described as “real works of art.” The assorted images were part of the various synodal documents submitted as part of the local, diocesan phase of the multi-year process.

Some of the images appear to juxtapose “Catholic identity” with “LGBTQ+ identity” and “intolerance” with “dialogue.” The word “Scripture” appears to be opposed to “radical hospitality.”

The most notable image, shared on Facebook, depicted a woman dressed as a priest, wearing a clerical collar, an alb, and a chasuble. She was also wearing a stole atop the chasuble, which traditionally is worn underneath the chasuble.

Next to her is an individual wearing a t-shirt emblazoned with the word “PRIDE” in the rainbow colors.

Unsurprisingly, the Synod’s promotion of female priests and LGBT ideology has been met with outrage from faithful Catholics online. The number of comments under the Facebook post (over 380 at time of writing) dwarves the usual engagement with the Synod.va account’s social media posting.

“This may be many things, but it most certainly isn’t the Catholic Faith,” wrote one Facebook user.

“This is not Catholicism, either in style or content,” wrote another.

One Nebraska Catholic, Jacob Bauer, described the pictures as “overtly and manifestly heretical” and called the image promoting female ordination “mortally sinful” in what it proposed.

What the Vatican’s official Synod Facebook page has posted (three days ago now!) is overtly and manifestly heretical.

To take to heart what is in this photo is mortally sinful… and it was published by an official Vatican media page. pic.twitter.com/ZMqRnP2GxR

Elaborating on this to LifeSiteNews, Bauer explained that “It was the first time I had ever seen something put out by an official Vatican media page that was endorsing something obviously and positively heretical — and at that, with no attempt at (and no real possibility of) a real alibi.”

Even with the Pachamama controversy “there was an attempt [from the Vatican] to claim that it wasn’t what it looked like,” he added, something which he said was not the case here. “However, if one were to actually believe that which is being promoted in this picture, they would be committing an eternally damnable sin.”

Also taking to Twitter, Deacon Nick Donnelly wrote that “The schismatic Ape of the Church is becoming more brazen.”

The schismatic Ape of the Church is becoming more brazen https://t.co/zuhL6T7pbX pic.twitter.com/6S779fZ7MS

He was echoed by U.K. Catholic blogger Mark Lambert, who strongly condemned the artwork as from “Satan.”

Honestly I just think these people are inspired by Satan. I hate everything they do, it’s not even recognisable as Catholic.

After highlighting the Synod’s promotion of female ordination, the Lepanto Institute also responded to a question posed by the Synod on another social media post, saying “Who’s missing from the synodal process? Christ and His Church!”

Who’s missing from the synodal process? Christ and His Church! pic.twitter.com/rzkH0iRpLn

Popular U.S. priest blogger Father John Zuhlsdorf blasted the Vatican and the Synod for the online posts, observing that the traditional Mass is restricted while the LGBT movement is not.

With all the local synodal reports having been collected, a team of “experts” is now compiling the key document which will guide the next stage of the Synod – drawing from all the reports received so far. The “experts” include a range of pro-LGBT and pro-contraception individuals, including Austen Ivereigh and Msgr. Phillipe Bordeyene.