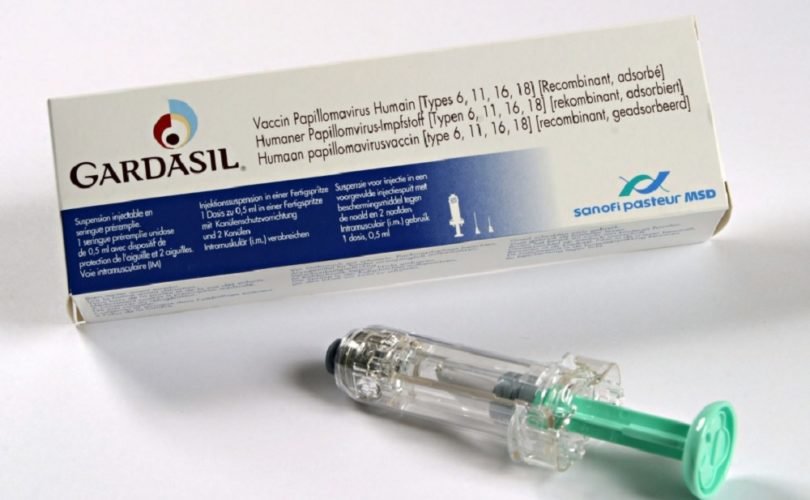 WINNIPEG, October 22, 2015 (LifeSiteNews) – Manitoba schoolboys will be offered Gardasil, the controversial vaccine against Human papillomavirus, despite its troubling side-effects, the provincial government has announced.

The move has prompted Manitoba holistic health activist Rose Stevens to call out Health Minister Sharon Brady. The Beausejour farmer and anti-GMO crusader sent Brady a letter saying in part, “This is a very controversial and dangerous vaccine. Many other countries are suing their governments because of this dangerous HPV vaccine. Do we really want to add the Manitoba NDP government onto this growing list?”

The government already offers Gardasil to Grade Six schoolgirls because, it insists, the vaccine is most effective when injected in youths before they become sexually active. HPV is a leading cause of cervical cancer; genital warts; and cancers of the throat, anus, and penis and is spread by sexual activity. Cervical cancer, according to Wikipedia, killed 266,00o worldwide in 2012 and 4,100 in the U.S.

Gardasil, which was developed and manufactured by the giant pharmaceutical firm Merck, has been injected in 50 million people since its introduction in 2007. Its critics say it addresses just four out of 170 strains of HPV and has many side-effects, such as miscarriage, stillbirth, ovarian cysts, genital warts, multiple sclerosis, lupus, paralysis, and stroke. Moreover, according to a recent Toronto Star story, many Canadian parents claim that its injection in their daughters has caused serious problems, disabilities, and death.

The Star reported that more than 50 Canadian girls developed serious medical conditions after their Gardasil  injections, with 15 of them hospitalized. This figure joins more than 100 deaths in the U.S. and tens of thousands of reports of  adverse effects.

Defenders say the four HPV strains targeted by Gardasil and another vaccine actually account for 70 percent of cervical cancer cases. According to the National Post, about 1,500 Canadian women get cervical cancer yearly, and 380 die.

Many Canadian provinces paid for schoolgirls to get Gardasil jabs, but many parents and some Catholic school systems opposed it, as did Catholic bishops led by Calgary's contrarian prelate Fred Henry, citing concerns about side-effects as well as Gardasil's implicit promotion of premature sexual activity and of a false sense of security (since Gardasil did not guard against most HPV strains).

While many public health authorities and science and health magazines endorse Gardasil and dismiss naysayers as religious fundamentalists, Stevens points to secular opponents with hard evidence. A watchdog organization called Judicial Watch, for example, sued the U.S. Department of Health and Human Services to reveal that it had paid $5.6 million in compensation to 49 claimants against HHS-administered Gardasil. Judicial Watch President Tom Fitton said at the time: “Public health officials should stop pushing Gardasil on children.”

Earlier this month, a Canadian kinesiology professor at Concordia University, Genevieve Rail, urged the Quebec government to stop funding anti-HPV vaccinations. Rail, the recipient of $300,000 in federal funding for her research on HPV vaccines, claimed they were both dangerous and ineffective. She was roundly condemned by the health establishment.

Stevens concluded her letter to Brady with the following: “I think it is high time you take a look at some  independent science that is not sponsored by the drug companies who have a vested interest in promoting this vaccine. Perhaps start with the question. 'Where are the long-term independent studies showing this vaccine is effective and safe?'”

The U.S. Federal Drug Administration reports that “[f]our multinational studies were conducted to show how well Gardasil worked in women between the ages of 16 and 26 by giving them either the vaccine or placebo. The results showed that in women who had not already been infected with the type of HPV contained in the vaccine, Gardasil was nearly 100 percent effective in preventing precancerous cervical lesions, precancerous vaginal and vulvar lesions and genital warts caused by infection with the HPV types against which the vaccine is directed. It is believed that prevention of cervical precancerous lesions is highly likely to result in the prevention of those cancers.”