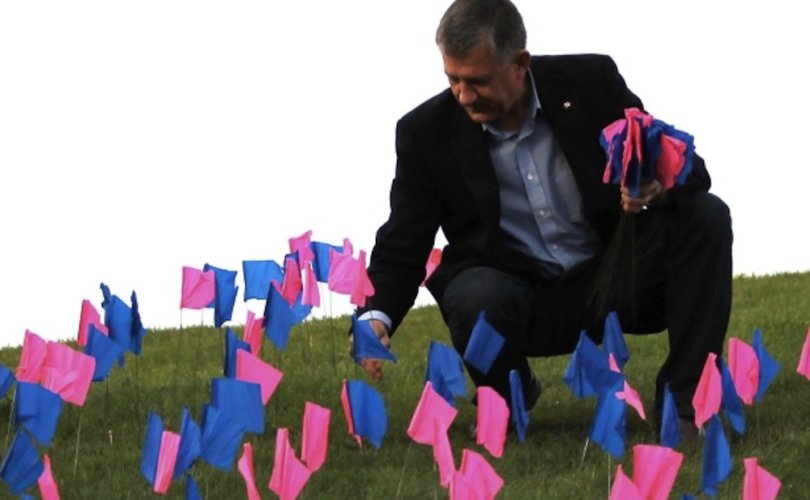 STEINBACH, Manitoba, October 4, 2016 (LifeSiteNews) – Pro-lifers in the southern Manitoba town of Steinbach were joined by MP Ted Falk as they planted 100,000 pink and blue flags in a city park to mourn the yearly death toll of unborn children in Canada’s hospitals and abortuaries.

“I was awestruck to see what 100,000 flags looks like and to think each one represents a baby taken out of its mother’s womb,” he told LifeSiteNews. Falk joined 80 other volunteers for an hour and 15 minutes as they set the flags in the ground in a local park. The job took another three-quarters of an hour to complete, and Falk said his stint left him with sore hamstrings.

The CBC interviewed homosexual rights activist Michelle McHale, who condemned Falk’s participation, but he said he wasn’t worried. “When I ran in 2013 and again in 2016, I made known my personal views were pro-life and pro-traditional family and would be carrying those over to Ottawa.” Falk received twice the number of votes as his nearest opponent in both contests.

McHale, a lesbian, has a history of activism in the community. He unsuccessfully tried to get the local public school district to promote homosexuality as part of an anti-bullying program, and she organized the city’s first Gay Pride Parade this summer.

Noting that Falk refused to attend the Pride parade, McHale complained to the CBC that Falk, who is vice chairman of the House of Commons committee on Justice and Human Rights, was participating in a pro-life event that she disagreed with so strongly.

“At first, I had to check the headlines to check whether it was real because there is a satirical [news site] that is done about Steinbach,” she said. “Then I was reading and it was [real] and my heart just sank.”

“Someone in a position like that just flat out refuses to attend something like Steinbach Pride and then stands up and attends something like this, where this is directly threatening the rights of women,” she said. “That feels like an egregious misuse of his position; it really does.”

The director of the organization that provided the flags says this is the sixth time they have put up the flag display. The first time was on Parliament Hill in 2014, said Mike Schouten of WeNeedaLAW.ca, then near the Ontario legislature at Queen’s Park in Toronto, another time in a park beside the Manitoba legislature, and at two other locations in Alberta and Ontario. Four smaller packages of 100,000 flags each have been set in 50 locations across Canada.

“City councils are often opposed at first,” he said, “but when we explain that it is completely passive display with no protests, and that there is nothing in their bylaws to justify saying no, they come round.”

Pamphlets that WeNeedaLAW provides local organizers to hand out with the flags make three points: that Canada is the only democracy in the world with no abortion law; that the same Supreme Court of Canada that threw out the existing law in 1988 also encouraged Parliament to make a new law to protect the unborn; and that the Canadian people support a law protecting the unborn.