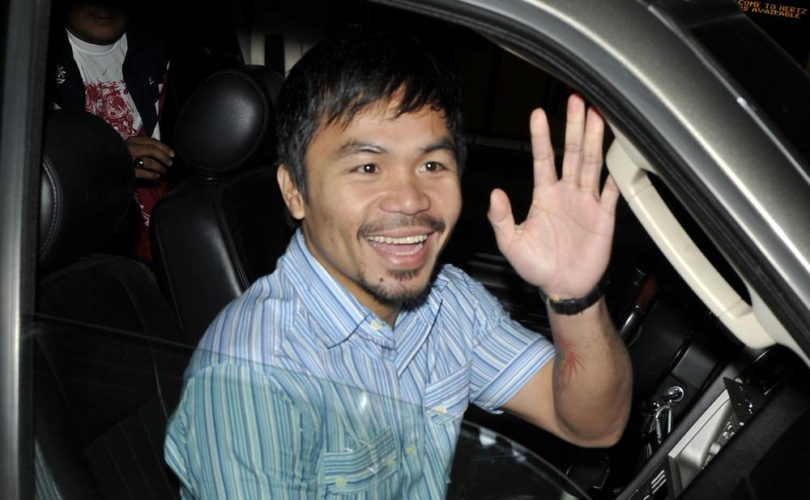 February 19, 2016 (LifeSiteNews) – Manny Pacquiao didn’t earn the U.S. Boxing Writers’ choice as Boxer of the Decade by backing away from a fight, and the Filipino isn’t backing down from comments made earlier this week defending natural marriage either.

The man who grosses millions of dollars a fight seemed unfazed by criticism and by the loss of the $1-million-a-year contract with Nike. “I am not condemning the LGBT,” he told reporters. “What I am condemning is the act. I’m happier because I’m telling the truth. … It’s worse if we will hide the truth. I’m happier that a lot of people were alarmed by the truth.”

As for the sponsorship loss, he said, “Whatever decision Nike makes is its decision and I respect that and its sponsorship of me now only involves my clothes for my fight.”

“Our contract has already ended aside from sponsoring the boxing,” he added.

Local celebrities in Manila were the first to criticize Pacquiao when he was widely misquoted for strong comments criticizing same-sex “marriage,” but the hostility soon jumped the Pacific Ocean as even his own promoter Bob Arum distanced himself. “What he’s saying is diametrically opposed to what I believe,” Arum said. “I’m in favor of gay rights and same-sex marriage. I’m apologetic personally to the gay movement in the United States.”

Then basketball legend Magic Johnson told the world he would never watch another Pacquiao fight.

Pacquiao, who has lost two of his last three fights, including the welterweight title, is supposed to be fighting only once more, early in April in Las Vegas, in a non-title bout with Timothy Bradley, Jr. At 37, the shrewd school dropout, said to be worth more than US $30 million, has already been elected twice to the Philippines National Assembly (the second time in an uncontested election) and is now running for the Senate election in May.

A notorious womanizer early in his 15-year career, he converted to Pentecostalism and cleaned up his life, and also began frankly condemning homosexuality as pressure began in the Philippines for same-sex “marriage.”

In 2012 he detailed his entirely orthodox Christian views on homosexuality to a reporter who inserted by way of elaboration the passage from Leviticus 20:10 which states, “If a man has sexual relations with a man…they are to be put to death, ” a quotation widely attributed to the boxer. Unquoted went the rest of the verse, which invokes the death penalty for a long list of heterosexual misalliances.

The Manila Channel 5 reporter must have known that Pacquiao would criticize same-sex “marriage” when asked about the issue this week, but could hardly have hoped for a more sensational wording.

“It’s common sense,” the boxer responded. “Will you see any animals where male is to male and female is to female? The animals are better. They know how to distinguish male from female. If we approve male on male, female on female then man is worse than animals.”

Condemned at home and abroad by celebrities, but largely defended by his fans, Pacquiao nonetheless videotaped an apology declaring his love “for LGBT” and regret at hurting anyone, but concluded by saying, “I still stand on my belief that I'm against same sex marriage because of what the Bible says, but I'm not condemning LGBT. I love you all with the love of the Lord.”