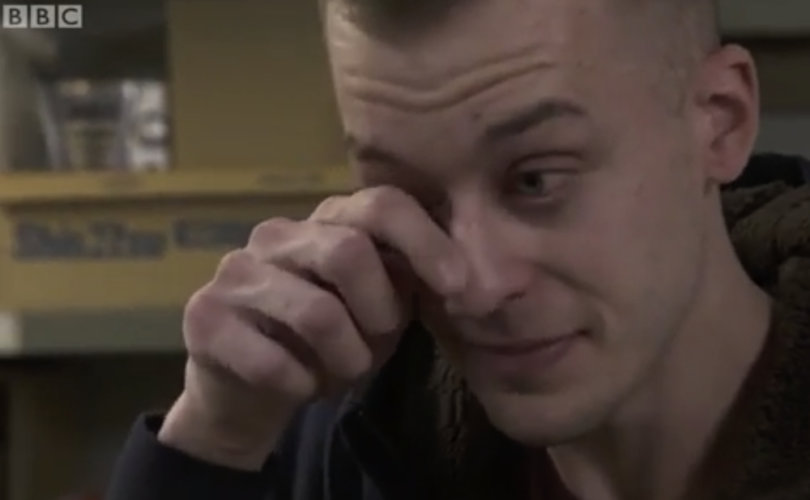 May 1, 2018 (LifeSiteNews) – While touring an “adult toy” factory in Japan that manufactures “sexbots” – life-size, lifelike robots created for the purpose of sexual gratification – a young BBC journalist stumbled upon a section of the building where childlike “sexbots” were being assembled.

BBC journalist James Young was “visibly shaken,” according to a Daily Star report, and said afterward that “the encounter was ‘horrific.’ I just had to get out of there.”

“Mr Young, who is also a biological scientist with a prosthetic arm and leg, traveled across the globe to meet the makers of sex robots for the documentary,” the report  continued. “During the show, he noted how it seemed “like they have the potential to bring out the worst things in us.”

While some assert that increasingly lifelike child sex dolls and “sexbots” will serve as a deterrent to criminal sexual acts against children by pedophiles, many experts believe the nascent, burgeoning industry will encourage sexual predation, leading to an increase, not a decrease, in the sexual exploitation of children.

Some of these dolls resemble children as young as three years old and can be customized to feature lifelike facial expressions, including sadness and fear.

Even more troubling, customers can customize their doll order to resemble children they actually know by providing photographs to the manufacturer. In the case of child “sexbots” currently under development, pedophilic customers will also have the option of providing sample voice recordings to further create the illusion of obtaining sexual gratification with a specific, real-life child known to the customer.

“Such dolls that have been confiscated at the borders in … the United Kingdom, Australia, New Zealand, and Canada, to name a few … contain anatomically correct body parts and orifices (mouth, vagina, and anus) which can be used to accommodate an adult male penis,” according to thecrimereport.org.

Social media giants –– which are often quick to censor Christian and conservative messaging as “offensive” or as “violating community standards” – have not been so alert when it comes to censoring the promotion of these child sex dolls and sexbots on their platforms.

“From YouTube to Instagram, and Twitter to Pinterest, videos and links to online markets for child sex dolls are being posted on the biggest social media sites,” NBC’s New York affiliate reported this weekend.

“On one YouTube channel called Pretty Dolls, which has since been removed, videos about life-sized dolls that look like children and are sold for a dark purpose have been watched more than 100,000 times,” the report continued.  “In addition to the social media listings, Google Shopping also offered child sex dolls — and there were listings even on Amazon.”

While YouTube and Twitter quickly removed offending links and sites in response to the NBC investigation, other child sex doll promotions popped up, revealing how pervasive the problem is and how determined both suppliers and customers are to do business.

“It’s a uniquely vile person who preys on children to fulfill horrific pedophilic urges,” Rep. Donovan said. “During my 20 years as a prosecutor, I put away animals who played out their disgusting fantasies on innocent children. What I saw and heard was enough to make anybody sick. Now, as a legislator in Congress, I’m introducing a bill to ban the newest outlet for pedophiles: child sex dolls. They don’t belong in our communities.”

Imported from China, Hong Kong, and Japan, the dolls are purposely mislabeled as mannequins or models to avoid detection by postal authorities.

Law enforcement agents note a correlation between the purchases of child sex dolls by individuals who have history of offenses against children. “(O)f the 128 dolls seized in the UK, 85 percent of the men who imported them were also found in possession of child pornography,” noted a press release from Rep. Donovan’s office. “Additionally, psychologists and researchers believe that these dolls reinforce, normalize, and encourage pedophilic behavior, potentially putting more children at risk to harm.”

“In fact, emerging psychology on the topic says these obscene dolls encourage abuse of real children,” Rep. Donovan said in an op-ed in The Hill. “Peter Fagan from the Johns Hopkins School of Medicine recently told The Atlantic that child sex dolls likely have a ‘reinforcing effect’ on pedophiles, and “in many instances cause (the urge) to be acted upon with greater urgency.”

A coalition of robotics experts, ethicists and child protection advocates have joined together to support the proposed legislation.

“Child sexual abuse is a heinous crime, one that no child should ever have to suffer,” said Michael Polenberg, VP of government affairs of Safe Horizon, a leading victim assistance organization. “How, then, to reconcile civil society’s abhorrence of child abuse with the production and import of life-sized, life-like dolls of children to be used for sexual purposes? This is deeply concerning on many levels.”

“There is currently a dramatic rise in the development of talking sex robots powered by Artificial Intelligence,” explained Noel Sharkey, co-director of the Foundation for Responsible Robotics. “The possibility of making anatomically detailed moving robot replicas of specific children for sexual gratification is now here and is surely a step too far. Such devices will, at the very least, have a pernicious impact on our society and create a threat to the sexual safety of our children.”

“The seizures of child sex dolls illustrates that sex offenders and pedophiles will stop at nothing to reach children,” said Stacie Rumenap, president of Stop Child Predators. “There is no doubt these dolls will be used to lure and groom children, and will ultimately lead to more sexual abuse and exploitation of real children.”

Melanie Blow, COO of the Stop Abuse Campaign, said, “Child sexual abuse is an epidemic in our society, affecting one-fifth of our nation's children. An epidemic with massive human and financial costs. Anything that normalizes adult sexual attraction towards children will only worsen this epidemic. Child sex dolls and robots that do this are perfectly legal, and that's a problem.”

Kathleen Richardson, founder of the Campaign Against Sex Robots and De Montfort University Professor of Ethics and Culture of Robots and AI, said, “I have listened to the stories of childhood sexual abuse survivors firsthand, and we must do everything to prevent future incidents. Giving child sex dolls and robots to pedophiles will do nothing but encourage harmful acts towards innocent children. A child’s safety should never be put below a predators desire or commercial companies profits.”

Some suggest that the “child sexbots” (CSBs) will provide a safe outlet for individuals who are sexually attracted to children.

“They envision a future in which pedophiles are prescribed CSBs so they can act out their urges without victimizing anyone,” according to an NBC report.

“There’s wide agreement among experts that neither child sex dolls nor CSBs should be freely available for purchase,” the report continued. “But some experts say the time has come to conduct scientific research to gauge their possible use as a deterrent for pedophilia, a psychiatric disorder that causes sexual attraction to prepubescent children and that is now treated with psychotherapy or, in some cases, libido-curbing drugs.”

CSBs likely to lead to the normalization of sex with children

While proponents of the manufacture and use of these child sex dolls and robots assert they may have clinical value in curtailing criminal sexual acts against real children, science and medicine suggest that is wishful thinking.

According to a report published at Harvard Health, society has good reason to be pessimistic about pedophilia, which “remains a vexing challenge for clinicians and public officials.” The report continued, “Pedophilia is a sexual orientation and unlikely to change.”

There is a “fear that CSBs could normalize deviant behavior — and lead pedophiles to cross the line with real victims. According to the U.K.-based nonprofit Campaign Against Sex Robots, there’s no evidence that adult sex dolls or sexbots have curbed demand for prostitutes,” the NBC report continued.

Director of the campaign, Dr. Kathleen Richardson, a professor of ethics and culture of robots at De Montfort University in Leicester, noted, “I’ve spoken to adults who were abused as children, and they don’t support the use of CSBs. They say that pedophiles who offend are so cut off from their own humanity that giving them a machine wouldn’t address the underlying problem.”

“For the sake of our country’s children,” Rep. Donovan said, “we absolutely cannot allow child sex dolls in our communities.”