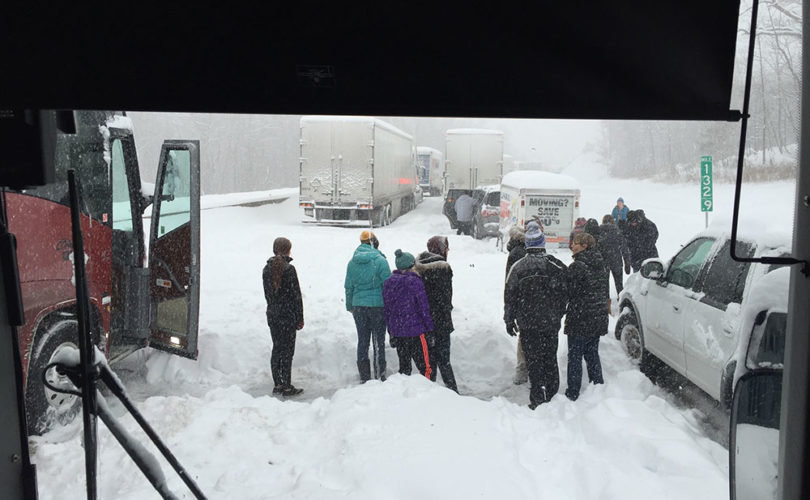 * See above slide show of 22 photos sent to LifeSiteNews from pro-lifer marchers at the scene. Click on blue arrows to advance photos.*

Update 9:10 p.m. Sat: This just now from Mandie DeVries who has two middle school girls and a four month old baby. She said baby is sleeping peacefully. Dubuque County RTL bus started moving at 7 pm. Iowans for LIFE bus about 40 min later. The backup was said then to be 32 miles long and some won't get out tonight. No idea about any of the many others

Update Sunday morning: All buses apprear to have been freed and pro-lifers are on way home.

PENNSYLVANIA TURNPIKE, January 23, 2016 (LifeSiteNews) – Reports continue to come in of busloads of marchers from Midwestern states that were among hundreds of other vehicles stranded now for about 21 hours in a bunched up, seven to 10-mile stretch on the Pennsylvania Turnpike in the Somerset and Bedford areas from Friday evening into Saturday.

The predicted severe weather was not enough to prevent thousands of pro-life pilgrims from travelling to the 43rd annual March for Life in Washington D.C., nor did it stop the resolve of many to hope that they could fulfill their pro-life commitment and still avoid the worst effects of the storm.

Patience, much prayer, an upbeat attitude and kindness for others have all been part of the still on-going response of the hundreds of pro-life supporters still stranded on the way home at the time of writing.  Priests have even celebrated Mass in the midst of the snowstorm. See video of singing during Mass bel0w.

Pro-life pilgrims have sacrificed in many ways to come to the March for Life every year, and harsh winter weather, along with many hours on a bus, have typically been part of the planned experience.

This year, however, it has unexpectedly turned out to be a much greater challenge for some, as drinking water supplies have dwindled and concern mounts over a group of buses trapped in winter storm Jonas running out of fuel.

The storm resulted in a notably lower, but still large turnout for the 2016 March, as quite a few dioceses and youth groups opted to cancel with the impending storm. Those that kept their plans to come, hurried to leave just after the March on Friday, cutting their trip short to hopefully avoid the storm center which was predicted to hit the nation’s capitol soon after the March began.

It was a minor accident in Pennsylvania that dashed the hope of dodging the storm just after 9 p.m. Friday, and left buses sitting for hours well past midday Saturday, and the situation so serious the National Guard was summoned early Saturday to assist the stranded.

“We have now been stuck over 15 hours in the snow because of this so called #jonasblizzard but that isn't ruining our spirits!” said Iowans for LIFE Associate Director Mary Granzow in a Facebook post Saturday morning. “We are still on a pilgrimage for life including Mass outside in the snow, snowball fights, and making sure those driving by know that every life matters!”

Granzow told LifeSiteNews it was a small accident at the bottom of a hill in front of them that initially caused a delay, and because of the accident, trucks couldn’t get up the hill, leaving everyone behind them stopped at the bottom waiting for them to clear the trucks out.

Traffic on the other side of the highway was moving normally Saturday morning, Granzow said, “It's just our side that is stopped” because of the accident on the uphill.

As of 11 a.m. Eastern Time Saturday, the Iowa pro-life group’s Executive Director Maggie DeWitte told LifeSiteNews, “Someone is bringing us food and water, but still no movement.”

Nine busloads of Nebraskans coming from the March for Life were part of the traffic stranded on the Pennsylvania Turnpike, the Omaha World-Herald said, with all safe.

Six were among the seven buses that the Archdiocese of Omaha had sent, and one of three buses sent from the Lincoln Diocese was there, as well as two from the University of Nebraska-Lincoln Newman Center.

Mandie DeVries, of Ankeny, Iowa, reported a social media post to LifeSiteNews from Cheboygan (Michigan) Right to Life, saying their bus was also stuck. DeVries traveled to the March with her two middle-school daughters and four-month-old son.

In addition to diocese from Des Moines, Dubuque, Sioux City and Sioux Falls, SD, reports rolled in to LifeSiteNews that pro-life groups from the Archdiocese Minneapolis-St. Paul and Milwaukee were also in the group.

The delay did not dampen the pro-life young people’s outlook, and it even further drew out their sense of concern for others.

“The kids are in pretty good spirits despite situation,” DeWitte said. “I have heard several say that despite all of this they are still glad they came.”

DeWitte told LifeSiteNews that young people from the Sioux Falls diocese were getting out and going to each car offering food and helping to shovel them out, especially significant given their situation meant their own supply was in jeopardy.

The young people also placed their signs from the March in the snow outside their busses for passing motorists to see the pro-life message.

In the morning Saturday, passengers on DeVries’ bus were filling their water bottles with snow to melt for water, and Carla Kasal, with the Dubuque County Right to Life group, said at about that same time their water supply was dwindling as well.

The bathroom on at least one bus was not working, and the group was making due outside under a blanket.

Students and chaperones prayed the Rosary on busses, and a Mass was celebrated for the young people at noon Saturday at the side of the turnpike by priests from the Diocese of Des Moines and Sioux City.

“The kids were lining the hill and singing,” Trina Hintgen, of Dubuque, told LifeSiteNews. “It was beautiful.”

The priests and young people had built an altar for the Mass from the snow.

As time passed Saturday the ordeal has continued with no end in sight.

At 3 p.m. Eastern Time, after 21 hours of being stranded now, DeWitte told LifeSiteNews that they were advised the roads were closed and that the original accident that caused this had still not been cleared up.

“They won't plow or anything more until the snow stops,” she said. “We were told the National Guard was coming but we haven't seen them. Firemen brought water several hours ago.”

In Washington the storm is still raging on with heavy snowfall as of 5 p.m. Saturday and likely also on the Pennsylvania Turnpike.

The Cheboygan bus just got freed!  There are still four miles of busses waiting, though. They were first stopped around 10:30 on Friday night. There are over 2200 Marchers stuck on just our little section of the turnpike. I counted 24 buses among the dozens and dozens of semis who are still stuck. I walked about a half mile up the turnpike and talked to every charter bus on the road.

I wrote down who the buses were and how many other buses from their group were also stuck.
These are the buses I found out about from my half mile walk:
Cascade Iowa two buses
One bus from Dyersville
Two from Dubuque
Three buses from Minnesota
One from South Dakota
One from North Dakota
One from Indiana
5 from north western Pennsylvania
One from Cleveland
Another one from Toledo
5 from the St Louis area
5/7 stuck from Omaha.
6 more from Lincoln
Two more from Iowans for Life.
People on our bus also have information from friends from these other stuck buses:
One more from Michigan- Cheboygan Right to Life.
Seven Steubenville buses.