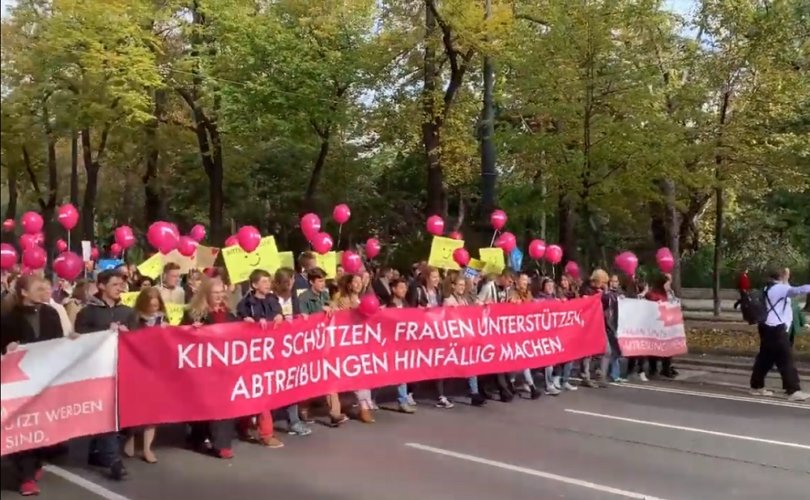 October 16, 2019 (LifeSiteNews) — Some 4,000 people of all ages and stations in life joined Austria’s second national March for Life (Marsch fürs Leben) on Saturday in Vienna, almost doubling last year’s numbers — to the organizers’ great satisfaction. Many young people and families with children participated, bearing pink balloons and signs with cheerful smileys (“Please smile, your mother chose your life”) in order to underscore their message: “protection” for every life regardless of its stage of development.

The peaceful demonstration walked from the Stephansplatz at the foot of Saint Stephen Cathedral to Josefsplats and the former imperial palace of Austria.

A tiny counter-demonstration with “stop homophobia” banners received more attention from the local left-wing press than the March itself.

Austria is a small, landlocked European country of under 9 million souls, with a proud imperial history and a long tradition of Catholic fidelity. It was in Vienna that the Turks were defeated in September 1683, when the Ottomans were attempting to spread Islamic domination toward Western Europe.

Abortion became legal in Austria in 1975 and is presently available without condition during the first three months of pregnancy. After that, a number of physical or psychological reasons can legally “justify” the killing of the unborn up till birth, including the possibility that the child “could” have a grave defect or because the mother does not feel she has the energy to look after a baby.

The official numbers of yearly abortions are not published in Austria, but according to Alexander Tschugguel, organizer of the Marsch fürs Leben, a conservative estimate would be 35,000 per year, while abortionists give a higher number of 50,000 per year.

“Our abortion law is very cruel,” Tschugguel, told LifeSite in a telephone interview, underscoring the fact that in practice, there is not even a firm time limit on abortion.

He noted that until recently, there was no national pro-life march in Austria since the time of the legalization of abortion — at that time, in the 1970s, several demonstrations were held, with up to 17,000 participants.

Since the 1990s, the organization “Youth for Life” has staged small regional demonstrations in various Austrian cities, attracting up to several hundred pro-lifers. But a number of its youthful activists, including Tschugguel, decided last year to have a national rally in Austria’s capital in order to have a greater impact. The first edition was considered a success with 2,500 participants.

With a true count of over 4,000 marchers this year, the organizers were pleased to see that the issue of abortion is touching Austrians’ hearts and minds.

The March was announced by Vatican News in September. But, LifeSite asked, did they have the support of the Church in Austria?

“A little bit. We had the support of the auxiliary bishop of Vienna, Stephan Turnovsky, who celebrated a Mass in Saint Stephen’s Cathedral before the March set out from the cathedral square. We also had good words from the emeritus auxiliary bishop of Salzburg, Andreas Laun,” said Tschugguel.

Bishop Turnovsky criticized a social system that “leaves pregnant women alone in distress,” adding that women in these situations should not be “convicted,” but receive “support” and “solidarity” that “say yes to both: the mother and the unborn child.”

“It must be possible in our prosperous Austria to find other solutions than the killing of a developing person,” said the auxiliary bishop. “Women should be helped to make decisions with which they can live well,” he said, before speaking in favor of all sorts of human solidarities with the poor, the hungry, refugees, and other victims of a society that is not “life-oriented.”

While the March is not an officially Catholic event, many of the organizers, all laypeople, are “proud” of their “Catholic faith,” said Tschugguel. They clearly accept the Catholic Church’s teaching on respect for human life from the moment of conception, he said. And in practice, many of the participants were Christian — before the March, a Protestant service was also held, and Catholic, Christian, and Orthodox speakers addressed the crowds.

Among them was Jonathon van Maren — well known to LifeSite followers thanks to his articles and podcasts — who had come from Canada to join a local congress next day. He said: “The truth is on our side, morality is on our side, and science is on our side. It’s so urgent that we create a science-based approach to this debate.”

Tschugguel noted that in coming years, the Austrian March for Life hopes to mobilize in religious circles. “We want to have all Catholics and Christians on our side for it to be ‘the’ pro-life event which is announced in parishes. Austria is not the biggest country in the world, and we know each other. We want our March to reach five digits soon,” he said, already announcing next year’s rally, which will take place on October 17, 2020 in Vienna.

The Marsch fürs Leben is clear about its objectives. It campaigns for the abolition of the Austrian abortion law.

“We are for the end of abortion. We don’t want human beings to be killed in the womb in any circumstance,” Tschugguel told LifeSite.

But the Marsch also wants women to receive the help they need: “We want women to have the possibility to look after their children. We want less taxes on families: not just a return at the end of the year. The Hungarians are doing that, and it works; they have halved the number of abortions in their country. While I welcome the new rule introduced by a recent Austrian government instituting a family bonus for families with children, it is way too little. We should not think that the state is nice to give us back money; it should not be taking this money away from families in the first place,” he said.

He added that laws should be made so that “crisis pregnancies” can be solved in the best way possible, in particular with the possibility of giving a child up for adoption.

Tschugguel concluded his remarks asking Catholics and pro-lifers not to “fight each other” because each comes with a different focus, some preferring to defend and help young mothers, others speaking more of the unborn, in some cases with the desire to obtain approval “in the eyes of the leftists.”