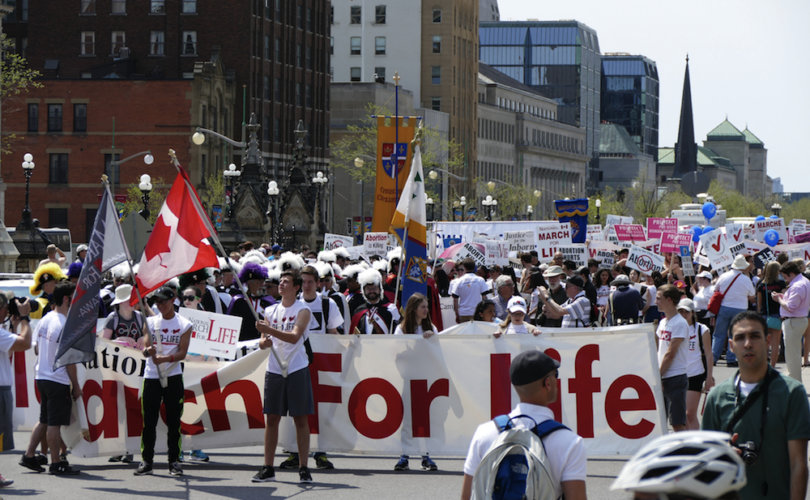 OTTAWA, April 25, 2108 (LifeSiteNews) — Campaign Life Coalition is urging Canadians to “stand up for life without compromise, no exceptions, no excuses” by joining the May 10 March for Life in Ottawa under the rallying theme: PRO-LIFE: ALL.IN.

The them is “a call to action to uphold the dignity and invaluable worth of every human life, in all aspects of our life, from personal to professional, from spiritual to political,” says Campaign Life Coalition youth coordinator Marie-Claire Bissonnette, in a video promoting the nation’s largest annual pro-life event.

On January 28, 1988, the Supreme Court struck down the law as unconstitutional, leaving Canada with no federal legislation on abortion.

It’s estimated 100,000 children are killed in the womb annually in Canada, where abortion is “fully funded by taxpayers for any reason or no reason at all, right up to the moment of birth,” notes the March for Life website.

The March for Life also boasts of an exceptionally young crowd, with 80 percent of the participants under the age of 30.

Campaign Life Coalition “carefully crafted our logo to represent our message” for this year’s March, Bissonnette explains in the video.

“The red colour hearkens to our Canadian flag. The two hands creating a heart-shape around the unborn child symbolize the love we have for life from its earliest stages,” she says.

“These hands protect the child from harm, the hands also resemble angel wings that symbolize the four million killed by abortion in Canada, knowing that they are now in heaven, swaddled by angels.”

The three-day event begins Wednesday, May 9 with a candlelight vigil.

Several Masses and prayer services scheduled for Thursday morning, followed by a rally at 12:30 on Parliament Hill, with John-Henry Westen, co-founder and editor-in-chief of LifeSiteNews as master of ceremonies.

The March itself takes place from 1:30 to 3:00 p.m., followed by a Silent No More Awareness presentation. It closes officially with a prayer service by the Eastern Catholic chaplaincy of Ottawa.

The day concludes with a Rose Dinner and a youth banquet held concurrently. An all-day youth conference follows on Friday.

For a complete schedule go here. For more information, go to the March for Life website here.