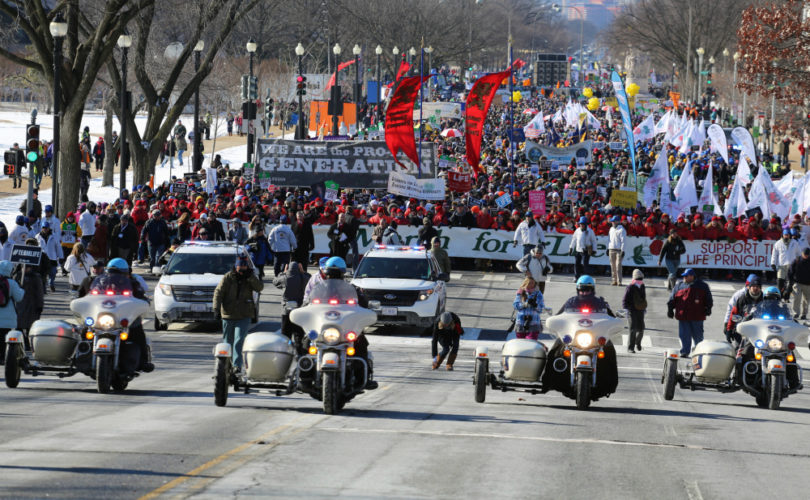 WASHINGTON, D.C., January 21, 2016 (LifeSiteNews) – Despite an historic snow storm that threatens to blanket the region with several feet of snow, the March for Life will go forward, its organizers said this afternoon.

Snow will begin sometime Friday afternoon, with a reported two inches an hour falling on Saturday. Snow accumulations of two to three feet are expected in the D.C. area by Sunday morning, increasing the possibility that the blizzard will cancel flights, knock out power, and snare services across a multi-state area.

But the March for Life's organizers say, it's going to take more than that to stop them.

“The 43rd annual March For Life is on,” says Jeanne Mancini, president of the March for Life Education & Defense Fund. “We have marched for the past 42 years on the anniversary of Roe v.Wade and will do so again tomorrow.”

“While many in Washington have expressed concerns over the weather, the 4 decade-long peaceful protest will not be cancelled,” the organization announced.

But those who come for the March on Friday may not leave until early next week, as feet of snow ground planes and make roadways impassable.

“Participants are advised to use their best judgement as to whether they should come in person or watch on TV,” Mancini added.

The march is providing EWTN's livestream of the 2016 March for Life on its website, as well.

“For those who can’t make it to the March Rally at noon at the Washington Monument, we encourage participation through social media using the hashtag #WhyWeMarch.”