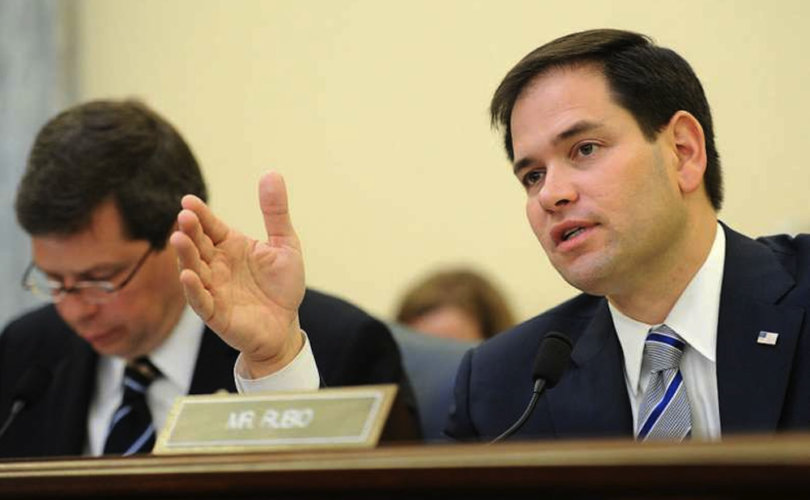 WASHINGTON, D.C. (LifeSiteNews) — Republican Sen. Marco Rubio of Florida came out forcefully Wednesday against a “stupid” Democrat bill that would codify forced recognition of same-sex “marriage” in federal and state law and obligate the federal government to recognize polygamous unions should a state choose to legalize them.

Introduced as part of Democrats’ efforts to stoke fear over the Supreme Court’s overturn of Roe v. Wade, HR 8404 would repeal the longstanding (but unenforced) Defense of Marriage Act, which recognized marriage as a man-woman union in federal law and protected states’ rights to do the same; federally recognize any “marriage” lawfully performed by any state; and force every state to recognize any “marriage” of any other state “between two individuals,” without regard for “the sex, race, ethnicity, or national origin of those individuals.”

Forty-seven House Republicans joined every House Democrat in voting to pass HR 8404, with the blessing of House Republican leaders Kevin McCarthy and Steve Scalise, and Senate Republican leader Mitch McConnell has declined to stake out a public position on the legislation until the chamber’s Democrat majority leader, Chuck Schumer, announces a decision on bringing it to the floor. As speculation continues on whether Schumer can find 10 GOP senators to join Democrats to pass it, the bill’s ramifications for polygamy have gone largely unmentioned.

So far, five Republican senators have either committed to or implied supporting the bill, meaning that Democrats only need to convince five more Republicans to join them in sending it to President Joe Biden’s desk.

Rubio will not be among them, however; he told CNN’s Manu Raju that the bill was a “stupid waste of time” he will vote to reject:

Present during the exchange was Democrat Sen. Tammy Baldwin of Wisconsin, a lesbian, who told CNN the next day that they “probably would have loved to be on the elevator to see the exchange after,” when she confronted Rubio about his words.

“I said that, ‘The recent Supreme Court decision eroded a constitutional right to privacy. There’s a whole bunch of cases that have been decided based on a constitutional right to privacy that are in jeopardy,’ which he disagrees with,” Baldwin shared. “And anyways, I said we’ll be talking some more.” As for how Rubio responded, Baldwin only said, “We’re not going to get into [it]. I’m counting votes.”

Baldwin appears to take a selective approach to constitutional rights; in 2015, she rejected the notion that Americans such as bakers shouldn’t be coerced into serving same-sex unions, stating that the “First Amendment says that in institutions of faith that there is absolute power to, you know, to observe deeply held religious beliefs. But I don’t think it extends far beyond that.”

LifeSiteNews is currently running a VoterVoice campaign attempting to make Republican senators aware of grassroots opposition to HR 8404, and vote against it accordingly.