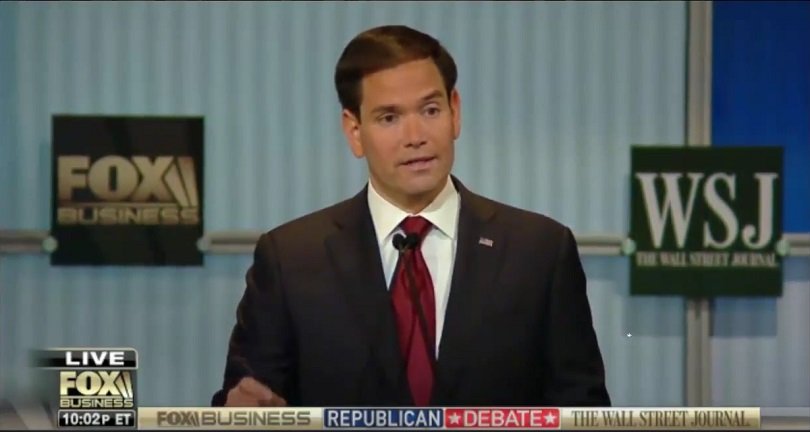 The discussion sparked one of the debate's fieriest moments, as Rubio and Rand Paul sparred over whose economic views are most conservative.

Rubio's tax plan would be a boon for large families. His proposal gives each family a refundable $2,500 child tax credit. Families would receive the full credit, even if it means they would receive more from the IRS than they paid in income taxes that year. The nonpartisan Tax Foundation found the policy “would actually result in many low-income taxpayers receiving more from the government than they pay.”

Rand Paul, the libertarian-leaning senator from Kentucky, said that amounts to wealth redistribution.

In a vigorous exchange, Rubio defended his policy, saying the credit not only refunds income tax but also money that workers paid into the payroll tax to fund programs such as Social Security, Medicare and unemployment. The same rationale was used to promote the Earned Income Tax Credit (EITC), a credit for low-income workers that often creates negative tax liability.

“Yes, I have a child tax credit increase, and I'm proud of it,” Rubio said. “I am proud that I have a pro-family tax code.”

Many conservatives worry about the growing number of Americans who pay no income tax, 43 percent in 2013. “I think everybody should pay something. I think everybody should have skin in the game,” Louisiana Governor Bobby Jindal said at the undercard debate. “We shouldn't be creating one group of Americans that's dependent on government [and] another group that's paying taxes.”

But a report from the conservative American Enterprise Institute suggested increasing the child tax credit to $3,000 and extending it “to both income and payroll taxes.” Only approximately 14 percent of taxpayers do not pay payroll taxes, most of them retirees.

Rick Santorum made a similar case for his own $2,750 tax credit in an earlier debate on Fox Business, which pitted Santorum against Jindal, Mike Huckabee, and Chris Christie.

Three presidential candidates – Lindsey Graham, Jim Gilmore, and George Pataki – were not invited, since they failed to meet the threshold of one percent support in recent polls.

For more information, here are the Tax Foundation's analyses of the Rubio, Paul, and Santorum tax plans.