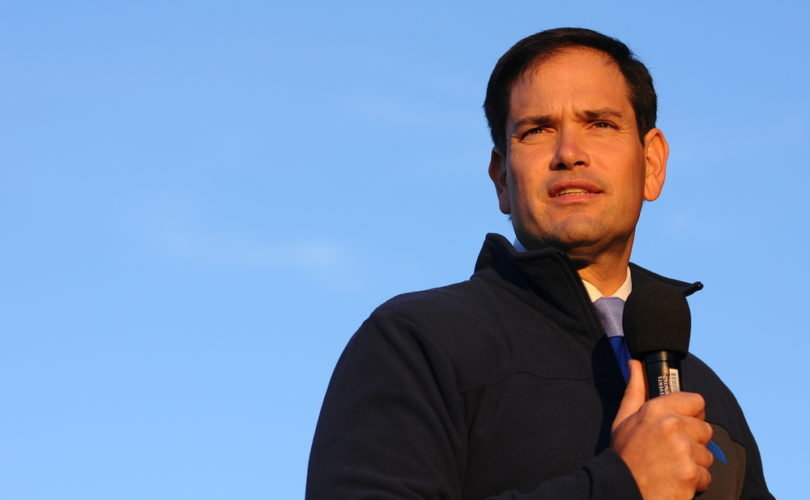 The amicus curiae brief, which was signed by 300 Republican operatives whose names spill over 24 pages, argued that having the court discover a nationwide right to same-sex “marriage” served “conservative values.”

The state marriage protection amendments defining marriage as the union of one man and one woman “run afoul of our constitutional order by submitting a fundamental right to legislative or popular referendum,” it stated. However, the original intent of the Constitution did not include a right to same-sex “marriage,” as states legally prohibited homosexuality until the Supreme Court struck down anti-sodomy laws in the 2003 Lawrence v. Texas decision.

Beeson's name did not appear on the original list of signers to the document but he had it added to an amended version, according to Will Hall of The Baptist Messenger.

The Rubio campaign declined LifeSiteNews' request for comment on the story.

Beeson has had campaign difficulties on other fronts, as he was accused of punching an aide to Sen. Rand Paul in the face last fall in Michigan. No charges were filed.

This follows revelations last year that Rubio's staff held quarterly meetings with the Log Cabin Republicans, a homosexual group that fought for gay “marriage.” Sen. Rubio reportedly did not attend those meetings, but Gregory Angelo, the group's president, told Reuters last spring that Rubio's staff sought to find issues they could “partner on.”

Rubio is “not as adamantly opposed to all things LGBT as some of his statements suggest,” Angelo said.

Rubio maintained after Obergefell that, while he believes voters in each state should determine the definition of marriage for themselves, “we live in a republic and must abide by the law.”

Although Rubio has called the Obergefell decision “bad law,” he has declined to support a constitutional amendment defining marriage, saying that doing so “would be conceding that the current Constitution…needs to be fixed.”

Instead, he said, he will nominate justices who may be inclined to overturn the ruling.

The Rubio campaign announced the formation of a “Marriage and Family Advisory Board” consisting of outspoken supporters of marriage, including Everett Piper of Oklahoma Wesleyan University and Alan Hawkins of Brigham Young University. Heritage Foundation scholar Ryan Anderson. Andeson, who has authored multiple books defending traditional marriage, is advising both Rubio and Ted Cruz. (“I'll advise anyone who will listen,” he said.) “The Supreme Court’s decisions in Windsor and Obergefell are only the most recent example of our failure as a society to understand what marriage is and why it matters,” said Eric Teetsel, the Rubio campaign's director of faith outreach, who also co-authored a book defending traditional marriage.

The council's formation was announced last Saturday, one week before the South Carolina primary.

Hall wrote that his investigation of the document revealed that no staff member from Ted Cruz or Donald Trump's campaign signed on to the brief, which was drawn up by former RNC Chair Ken Mehlman, who came out of the closet after leaving his position with the GOP. LifeSiteNews has not yet compared the full list independently.

However, multiple staffers of Governor Jeb Bush signed the amicus brief: David Kochel and Mike Murphy, although Kochel had his name removed. An additional Bush staffer, Sally Bradshaw, said she encouraged her pastor to publicly preach in favor of same-sex “marriage” despite pressure from more traditional Christians.

Brian Jones, an adviser to Gov. Chris Christie's moribund presidential campaign and a former functionary in the unsuccessful campaigns of Mitt Romney and John McCain, signed on, as well.

It is unclear how evangelicals in South Carolina will respond to the news. Rubio won a coveted endorsement from the state's governor, Nikki Haley, this week ahead of Saturday's primary.

Gov. Haley said in her response to the State of the Union last month that the next Republican president would “respect differences in modern families.”

The National Organization for Marriage has endorsed Ted Cruz and is running ads in South Carolina against Donald Trump, but not Rubio. Sen. Cruz, who backs a constitutional amendment leaving the definition of marriage to the states, says his two rivals' statements about the court on the issue of marriage are identical.

Marco Rubio: ‘Sexual preferences’ are not a ‘choice’ but ‘something that people are born with’ (Video)