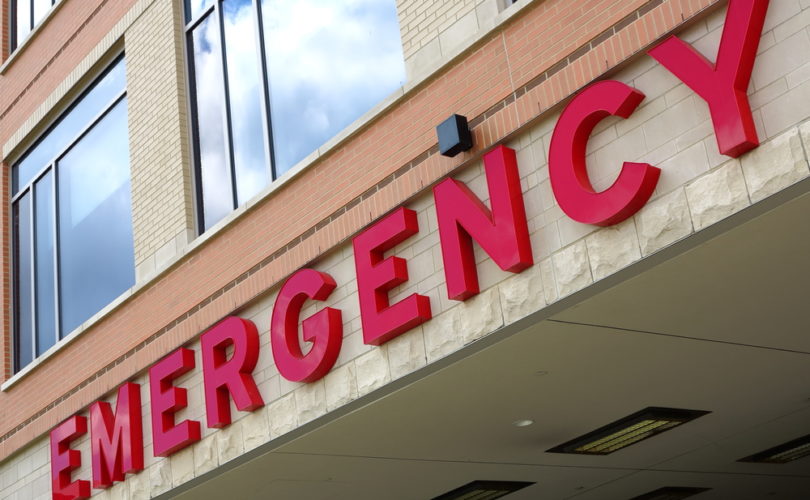 NEW YORK, June 7, 2017 (Operation Rescue) – Pro-life activist Michael Sweeney stood outside of the Margaret Sanger Planned Parenthood abortion facility on May 24, attempting to offer help to women seeking abortions as he so often does.

But what started as a routine shift at the abortion facility would soon change into an intense effort to save a baby, and later the life of its mother.

However, the security guard posted in the building entryway must have seen him speaking to Michael. Not only was the man was barred from seeing the woman, he was not even allowed to re-enter Planned Parenthood’s waiting room. Frustrated and upset, he returned to speak further with Michael.

As they waited on the sidewalk, Michael put the man on the telephone with the Sisters of Life, who explained more about the abortion and about what options were available. After about an hour, Michael’s shift was over and he had to leave his new friend to wait for his fiancée alone.

Meanwhile, the man resumed his conversation on his own phone with the Sisters for Life as long minutes of waiting turned into hours. As he was on the phone with one of the nuns about three hours after Michael left, he saw an ambulance pull up.

He hoped the ambulance was not for his fiancée. What were the odds of that? But soon, the paramedics emerged and his worst fears were realized. The woman in the care of paramedics was indeed his loved one.

She was rushed to NYU Langdon Medical Center several blocks away where she underwent emergency surgery for 2 1/2 hours. One of the Sisters for Life visited the hospital and spoke to a nurse, who confirmed the woman was in surgery. The nun left a prayer card for the nurse to give to the patient.

While the extent of her injuries remains unknown, they were obviously severe considering the length of the surgery she endured to repair the damage from the botched abortion. When Michael followed up with his new friend to see how he and his fiancée were doing, he was told the woman was recovering slowly.

What might have been if that security guard had allowed the man Michael Sweeney befriended back into Planned Parenthood to speak with his loved one? Perhaps a life would have been saved and a woman spared the traumatic injury of a bungled abortion.

It was obvious that it is Planned Parenthood’s policy to keep companions from interacting with abortion patients once they have been seen so the women will not change their minds at the last minute.

“Planned Parenthood is only about one choice and that is abortion,” said Troy Newman, president of Operation Rescue. “If they were really interested in the woman’s well-being, they would not prevent family members from seeing or communicating their loved ones. This is a tragedy that could well have been avoided if Planned Parenthood had treated this couple with dignity instead of like a dollar bill.”