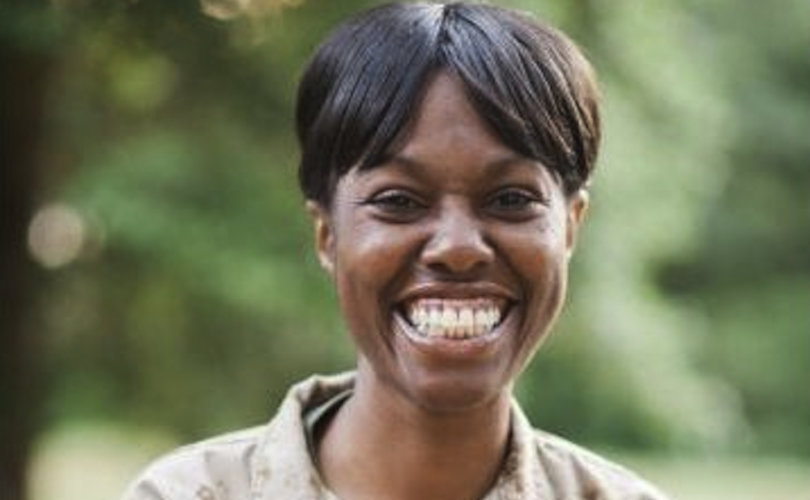 JACKSONVILLE, North Carolina, May 9, 2017 (LifeSiteNews) — A Marine court-martialed in 2014 says she was denied her religious liberty when the placement of a Bible verse on her desk was used against her.

In May 2013, Lance Cpl. Monifa Sterling put Isaiah 54:17 (“No weapon formed against you shall prosper”) on her desk at Camp Lejune, North Carolina. Her superior cursed at her and told her to take it down. When she didn’t, the superior took it and threw it away.

Sterling was taken to military court and convicted in 2014 for refusing to obey orders. The miliary also contended that Sterling once failed to wear the “appropriate” uniform, a particular “uniform of the day” that Sterling says interferred with her medical back brace. She was also charged with not helping distribute vehicle passes.

Sterling's rank was reduced to Private and she was given a “bad conduct” discharge, which has since made it hard to find a job.

The military considered her Bible verse “contrary to good order and discipline.” The Navy-Marine Corps Court of Criminal Appeals and the Court of Appeals for the Armed Forces upheld Sterling’s conviction.

The Religious Freedom Restoration Act (RFRA) of 1993 allows men and women in uniform to exercise their faith freely. But the U.S. Court of Appeals for the Armed Forces determined that religious freedom did not apply, ruling that to strip her scripture verse away posed no “real burden” in her exercise of faith because displaying a Bible verse is not a religious exercise.

The court further ruled that because others shared Sterling’s desk, the Bible verse was a threat to good order. “It is not hard to imagine the divisive impact to good order and discipline that may result when a service member is compelled to work at a government desk festooned with religious quotations,” it said.

First Liberty Institute attorney Michael Berry, who is now representing Sterling, pointed out that other Marines were allowed to decorate their desks, but that fact was not allowed to be admitted in court. Berry added that at the time of the incident, Sterling’s desk was not used by anyone else.

Berry says the military was just trying to beef up their charges against Sterling “to make it look that things were worse than they were.”

Berry considers this a clear case of anti-Christian bias. “This was a conflict between her and her supervisor (who) clearly said she did not like the tone of the Bible verses,” he explained. Nevertheless, “restricting a Marine’s free exercise of religion is blatantly unconstitutional.”

Sterling hopes her case will go to the U.S. Supreme Court, to defend the religious practices of Christians in the military. Significantly, First Liberty Institute is joined by former U.S. Solicitor General Paul Clement, now professor of law at Georgetown University, who won the U.S. Supreme Court Hobby Lobby case.

In December, First Liberty Institute filed a request for a writ of certiorari for Sterling’s case, part of a petition for Supreme Court review.

“The decision is especially problematic because the military appeals court has exclusive jurisdiction over court-martial proceedings,” Rabbi S. Simcha Goldman pointed out. “Anyone in the military who is court-martialed in connection with religious exercise will be subject to this precedent.”

First Liberty Institute argues that the military was wrong in determining the “free exercise” of religion only applies to behavior “compelled” by religious beliefs, such as fasting or wearing a hijab. The law firm says the RFRA and the U.S. Constitution protect behavior motivated and encouraged by religious beliefs, such as Sterling’s slip of scripture.

First Liberty explained that it is not within the court’s domain to determine which practices are “religiously compelled” and which are “religiously motivated.” In fact, Christianity specifically teaches that all are free in Christ.

“Are Christians ‘compelled’ to read the Bible, or is reading the Bible merely ‘motivated’ by faith?” they reason. “Indeed, the whole notion of having clear prohibitions, precepts, and tenets is itself a religious judgment on which different religions have different perspectives.”

Ironically, the Pentagon posts a Bible verse. A painting of a soldier kneeling in prayer with his family is displayed in the halls of the Pentagon. At the bottom is Isaiah 6:8 — “Whom shall I send and who will go for us?”