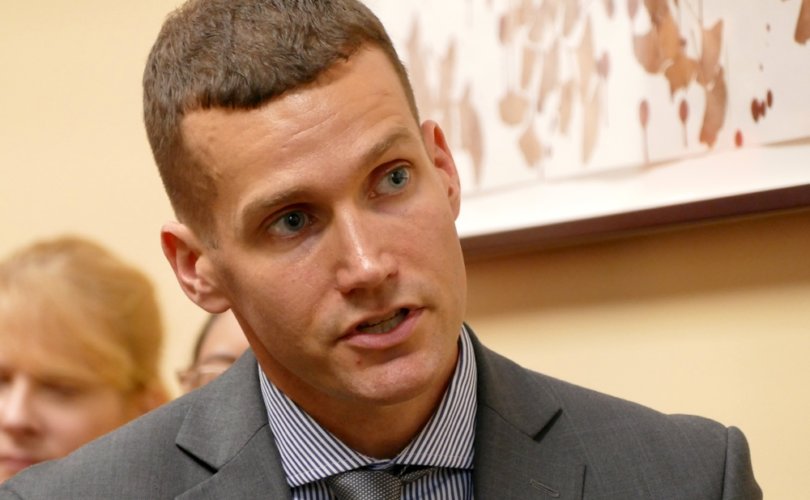 Hanson, a veteran of the U.S. Marine Corps, testified and lobbied against assisted suicide legislation in his role as President of the PRAF.

He was diagnosed with glioblastoma, the same kind of aggressive brain cancer pro-assisted suicide advocate Brittany Maynard had, in May 2014. Doctors told Hanson he had four months to live; he lived three more years. Maynard committed suicide in November 2014.

Hanson is survived by his wife, Kristen, and their sons, aged six months and four years.

“Initially, J.J.’s doctors offered him no hope, but he and Kristen had hope in abundance,” said Kathleen M. Gallagher, director of pro-life activities for the New York State Catholic Conference, in a statement.

Hanson “reached out to doctors, veterans groups and other organizations, persuaded lawmakers and journalists, raised funds for cancer research, traveled to Albany, Washington, D.C., and states all across the country, and took every opportunity to promote compassionate life-affirming care for persons facing disease and disability,” Gallagher recalled. “And he did that while facing tremendous health hurdles, undergoing surgeries and treatments, and caring for his family.”

Bishop Edward B. Scharfenberger of the Diocese of Albany praised Hanson’s courage and urged people to reflect on all the good that he accomplished during his life. He said Hanson was a “force to be reckoned with.”

“He inspired us all and will continue to do so whenever we face struggles in our own lives and remember his example of grace under pressure,” said Scharfenberger. “We are grateful, too, for his commitment to life, even at its most vulnerable and difficult stages.”

“In his role as president of the Patients’ Rights Action Fund, J.J. spoke out against the push to legalize physician-assisted suicide in New York State and beyond,” the bishop continued. “He was a force to be reckoned with, both in his battle against cancer and in his defense of all life. We will miss him. We pray for the repose of his soul and for the beautiful family he leaves behind.”

The New York Alliance Against Assisted Suicide issued a statement mourning the death of their “treasured colleague and friend.”

“We will miss J.J.’s leadership, his optimism, his selflessness, his tenacity, and his willingness to draw upon his own difficult experiences to advocate for others facing challenging medical problems,” the Alliance said. “We can unequivocally say that J.J. Hanson’s life—despite its brevity—made the world a better place for those who will come after him.”

“JJ lived his motto: ‘Every day is a gift, and you can’t ever let that go,’” said Gallagher. “He and Kristen are a true testament to living their faith through adversity, and J.J.’s death is a loving example of an authentic ‘death with dignity.’”

“We are so grateful to Kristen and the boys for sharing J.J. with us these last three years and enabling him to touch so many lives,” concluded Gallagher. “We pray for their comfort and solace in this very difficult time.”

On Hanson’s blog, Kristen wrote that their second son, now six months old, was a “tiny miracle” because her husband’s treatment would make it very difficult for them to conceive another child. Right before her husband began a clinical trial that required him to sign paperwork promising to “take all measures necessary to avoid getting pregnant while on the trial” due to the risks, Kristen discovered she was pregnant.

“I remember dropping to my knees in tears realizing that what seemed impossible had happened,” she wrote in April 2017. “I couldn’t wait to share the news with JJ.”

Kristen said their second child in utero was “a light in the darkness” who “has given us so much to look forward to and…has helped us to stay focused on hope.”

A YouCaring page has raised over $16,000 for Hanson’s family.

“Please join in this moment of hope to buoy them up with the steel of our love, which neither disease nor death can break,” it says.