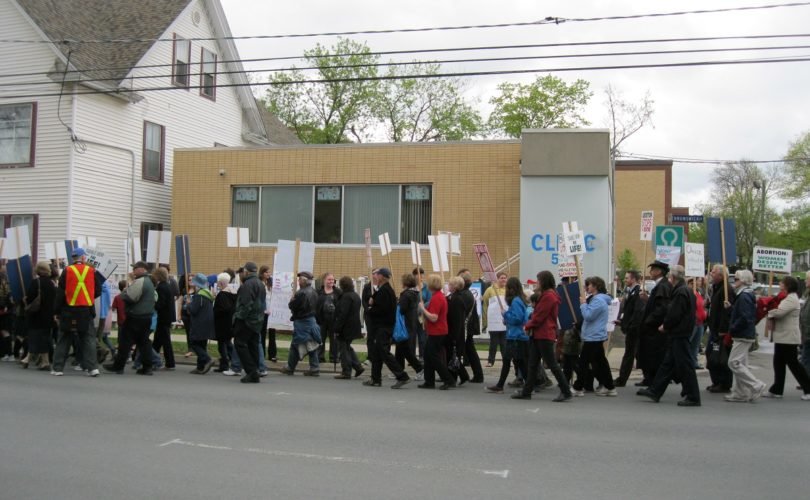 The Maritimes’ only freestanding abortion facility is performing its last abortions today after operating for 20 years, during which the lives of an estimated 10,000 unborn children have been taken. But local pro-life leaders say the closure of Fredericton’s Morgentaler Clinic is no real victory for the unborn yet.

“It’s definitely a publicity stunt,” Elizabeth Crouchman, president of New Brunswick Right to Life, told LifeSiteNews. “They’re playing their own game. I’m sure the whole thing is political. I don’t see any victory for the unborn yet. I’m not cheering yet.”

Crouchman and NB Right to Life Executive Director Peter Ryan suspect abortion advocates are using the closure as part of a political strategy to ultimately pressure the government into funding the procedure in the private clinic.

The Abortion Rights Coalition of Canada thanked the abortion facility on its Facebook page today for “helping so many women over the years, and for saving countless lives.”

Simone Leibovitch, manager of the Morgentaler Clinic, confirmed to LifeSiteNews that “today is the last day we are having abortions.” She refused to say what activities the facility will be engaging in until the end of the month, when it is officially scheduled to close.

“They’re playing their own game. I’m sure the whole thing is political. I don’t see any victory for the unborn yet.”

Pro-lifers have reason to be skeptical about the facility’s ultimate demise.

A fundraising campaign by Reproductive Justice New Brunswick to “save the Maritimes' only abortion clinic” has surpassed its goal of raising $100,000 to lease the mill at the end of the month. They have raised $113,000 so far.

“The collective is in discussion with the building’s owners to enter into a lease agreement and further explore options to encourage family practitioners who support a person’s right to full reproductive services, including the right to abortion,” the group states on its Fundrazr page.

Abortion advocates rallied at the facility this afternoon in an attempt to demonstrate to the government “how important the clinic is to New Brunswickers.”

The Morgentaler Clinic announced in April that it would be closing its doors in July due to financial reasons. Abortion activists provincially and nationally immediately began — in what pro-lifers believe was a premeditated and well-rehearsed campaign — to secure public sympathy for tax-funded abortions in the privately-owned clinic.

While abortion is covered at taxpayers’ expense in two provincial hospitals, it has not been covered at the Morgentaler Clinic, up until now the province’s only private abortion facility. There the cost of aborting an unborn baby at 16 weeks gestation or later would cost a mother about $850.

The late Dr. Henry Morgentaler sued the New Brunswick government in 2002 for not paying for abortions at his facility, but the facility abandoned the suit in April after the government declined to take a position on the matter due to the ongoing legal proceedings.

Despite intense pressure from the abortion lobby to have the province’s funding laws changed, the reigning PC government stated in May that it will continue to “not fund private clinics.” The province’s Liberal Party, however, flip-flopped on its previous position on abortion in April, approving a resolution calling for taxpayer-funded abortion at private facilities. Abortion activists are trying to rally the province to elect a government in September who will give them tax-funded abortion with no strings attached.

Ryan told LifeSiteNews that while he hopes the campaign to keep the abortion mill open fails, he would not be surprised to see some wealthy pro-abortion groups parachute in the necessary funds to “rescue them at the last minute.”

“What would be interesting is to know their negotiations with Morgentaler’s widow, who holds all the cards regarding sale or lease,” he said.

Crouchman told LifeSiteNews that no matter what happens, people are forgetting the little unborn child who ought to be at the center of everything.

“It’s regrettable that we’re having this conversation about an unborn child. It’s regrettable to me that we as a nation are poised to perhaps eliminate more Canadians if we don’t take strong action in preventing this, in any way possible, to continue,” she said.