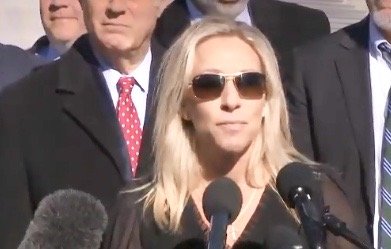 U.S. Rep. Marjorie Taylor Greene of Georgia rails against the Equality Act passed by the House.Twitter

Today, the @FreedomCaucus stood in OPPOSITION to the so-called “Equality” Act.

This bill is a direct attack on women rights, female competitive sports, and religious freedom.

We need to what's right, defending freedom, not legislating on “feelings.” pic.twitter.com/8vWssQwMow

Greene criticized the lawmakers behind the bill’s success, particularly the Democrats, whom she said, “Under Nancy Pelosi, Joe Biden, and the rest of the woke Democrats,” they are “defying science, defying God’s creation, and only care about governing over people’s feelings.”

Greene also compared the Democratic Party with a tyrannical government, which she noted is antithetical to American values: “This is a country that was founded by brave people seeking religious freedom, demanding that they are able to protect their second amendment rights, creating a country where they could run their businesses and not be overtaxed by a tyrannical government.”

“But now we find ourselves in a time where Democrats are running, indeed, a tyrannical Congress and federal government.”

The effects of the bill are far-reaching, writing transgenderism into federal civil rights law, compelling medical professionals to commit abortions and transgender surgeries, and expanding taxpayer-funded abortion on demand.

The so-called “Equality” Act is not about stopping discrimination.

It’s about causing discrimination against women and religious freedom.

I moved to adjourn for the day to give the 117th Congress more time to think about this immoral bill. pic.twitter.com/GIbKxeL7kk

“Every single person should be outraged at this bill. You should be angered, you should be concerned for the safety of all the little girls that are going to go into a bathroom, not knowing if there is a man in there that calls himself a woman,” she warned.

Greene made headlines recently after a spat between herself and her Democrat Rep. Marie Newman. Newman, who favored the Equality Act, erected a transgender pride flag outside her office to taunt Greene, whose office is acorss the hall. In response, Greene displayed a sign outside her own door that reads: “There are TWO genders: MALE & FEMALE ‘Trust the Science!’”

During Greene's speech, Greene noted the many consequences of the bill, fearing especially for children who are exposed to new risks. “Boys that want to call themselves girls do not belong in my daughter’s bathrooms, in my daughter’s locker rooms, on my daughter’s playing field, traveling with her team where she is forced to share a hotel room with him. No. They don’t belong.”

Women’s rights, too, were at the top of Greene’s list, which she stated will be grossly violated by the Equality Act.

“I’m sorry, it’s not about their feelings. We have to govern in what’s right and wrong, not about people’s feelings. This is what is wrong with America today,” she said.

Greene also defended the rights of the unborn, as well as doctors who “didn’t go to medical schools for years and years to be forced to perform abortions or mastectomies on teenage girls that (sic) are confused and want their breasts removed; they should be able to say no to that.”

“You see, no one’s talking about all of the consequences that come with the Equality Act,” she noted, “but they are very real. All you have to do is read the text to the bill, which the Democrats lie (about) and tell you that it won’t destroy religious freedoms, and it won’t destroy women’s rights.”

Directing her attention to the mainstream media, Greene challenged them to “Put the truth out there, that’s your job.”

Referring to conservative news media like OANN, Fox, and Newsmax being censored, she advised that mainstream outlets “be very concerned when people in Congress are trying to get rid of colleagues of yours. That’s a violation of freedom of the press.”

More broadly, however, Greene said that “every single taxpayer in this country should be mortified at a bill, a $1.9 trillion bill that less than 9 percent goes to COVID relief when over 100,000 small business have been destroyed and children’s lives and educations are being ruined. Shame on America! This is devastating.”

“We need to govern on what is right, defending our freedoms, and not about people’s feelings.”